and may leave many wealthy socialites bankrupt:

I immediately thought of pope Benedict XVI’s words about how money is “nothing”. I can imagine the pain of losing everything and I hope these people find real wealth, treasures in heaven.
cbsnews.com/stories/2008/10/06/world/main4504241.shtml

and may leave many wealthy socialites bankrupt:

I immediately thought of pope Benedict XVI’s words about how money is “nothing”. I can imagine the pain of losing everything and I hope these people find real wealth, treasures in heaven.
cbsnews.com/stories/2008/10/06/world/main4504241.shtml

Let’s hope there is not another bailout for them.

I think we’ll be seeing a lot more of this, as the market collapses and these crooks can’t hide behind it anymore.

From the New York Times (registration might be required):

Lawyer Seen as Bold Enough to Cheat the Best of Investors

But people there gave little thought to Mr. Dreier’s odd visit until November, when the company’s founder, Sheldon H. Solow, received a disturbing call. The caller wanted to let Mr. Solow know that Mr. Dreier had offered him the chance to buy promissory notes that had been issued by the company, people associated with the firm said.

They were fake notes, and shortly thereafter, lawyers for Solow Realty — different lawyers — were in touch with federal authorities, reporting their suspicions that Mr. Dreier might be engaged in financial fraud.

Since that opening tip, federal authorities have been tracking what they describe as a brazen swindle of some of New York’s savviest investors by one of New York’s more accomplished lawyers. Mr. Dreier has been charged with multiple frauds in the United States and a related crime in Canada, and is being held without bail in Manhattan.

In court last week, prosecutors said their count so far put the money missing at $380 million, most of it lost by hedge funds and other investors who had bought promissory notes that were flat-out fictions.

When I posted my initial response, I did not realize that some philanthropic funds were under Madoff’s control.

This paragraph initially made me less sympathetic:

Some of America’s wealthiest socialites were facing ruin last night after the arrest of a Wall Street big hitter accused of the largest investor swindle perpetrated by one man.

Shock and panic spread through the country clubs of Palm Beach and Long Island after Bernard Madoff, a trading powerbroker for more than four decades, allegedly confessed to a fraud that will cost his wealthy investors at least $50 billion – perhaps the largest swindle in Wall Street history.

This makes you more sympathetic to them:

Is this bigger or not as big as The Foundation for New Era Philanthropy?

Specifically, we’re hearing that the smart money KNEW Bernie had to be cheating, because the returns he was generating were impossibly good. Many Wall Streeters suspected the wrong rigged game, though: They thought it was insider trading, not a Ponzi scheme. And here’s the best part: That’s why they invested with him.

[quote]
For years and years I’ve heard people say that [Bernie’s] investment performance was too good to be true. The returns were too steady – like GE earnings under Welch – and too high given the supposed strategy.

One Madoff investor, himself a legend, told me that Madoff’s performance “just doesn’t make sense. The numbers can’t be straight.” Another sophisticated Madoff investor actually went through trade confirms in order to reverse-engineer the strategy and said, “it doesn’t add up.”

So why did these smart and skeptical investors keep investing? They, like many Madoff investors, assumed Madoff was somehow illegally trading on information from his market-making business for their benefit. They didn’t consider the possibility that he was clean on that score but running a good old-fashioned Ponzi scheme.

And another from Whitney Tilson:

You could lose if you apply the collar (buying a given stock, then selling a call option and using the premium from that option to buy a put optio); it is not an arbitrage strategy. The collar does have a downside though, although it is limited download. The upside is limited too. Even firms such as LTCM who thought they were receiving free money (largely through fixed-income trades) lost big when a 20 sigma event (20 standard deviations above the mean) happened (e.g. Russia defaulting on its debt in 1998).

I do not think such a strategy is capable of given such consistent returns. 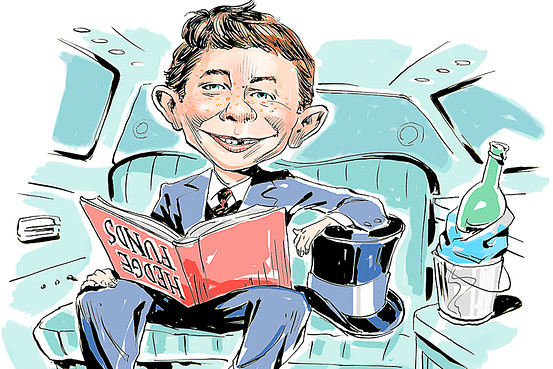 This is truly stunning! The biggest Ponzi scheme ever, by far. This just goes to show what greed will do to you…

system closed September 24, 2017, 10:18pm #9
DISCLAIMER: The views and opinions expressed in these forums do not necessarily reflect those of Catholic Answers. For official apologetics resources please visit www.catholic.com.