A member of the US Congress suggests for people to make lists, “archiving” political opponents

Is this normal behavior or is it “The New Normal” behavior?

Is this normal behavior or is it “The New Normal” behavior?

Just more fascistic talk from the left. It’s their normal.

When this nightmare is over, we need a Truth and Reconciliation Commission. It would erase Trump’s lies, comfort those who have been harmed by his hatefulness, and name every official, politician, executive, and media mogul whose greed and cowardice enabled this catastrophe. - Robert Reich.

They called Trump a fascist and a Nazi for four years. When he actually had the chance to be authoritarian, nationalizing a shut down of America through marshal law, he didn’t. He remained a constitutional federalist.

You’ve linked to evidence of who the real fascists are.

This listing of political opponents was the sort of thing Stalin did when he was ready to do his purges. Be forewarned.

As an archivist, I am categorically and unequivocally opposed to using ‘archive’ as a verb.

As an archivist, I am categorically and unequivocally opposed to using ‘archive’ as a verb.

You know, that makes such a strong argument for returning to the Traditional Latin Mass and abandoning the vernacular!

It appears that some democrats want revenge. I saw a reporter for the Washington Post was saying similar.

The election’s not even over yet and already Joe Biden’s peace train could be headed off the rails. The Democrat promised repeatedly during the campaign to unite the country by governing as “an Ame…

No doubt that played well with the deep-state haters and resistance crowd, but it smacked of juvenile bravado and Bates deserves a visit to the woodshed. By letting the public know he doesn’t approve of such talk, Biden would be affirming his unity pledge to all Americans.

…As for Ocasio-Cortez, she is supporting the reprehensible idea of having her side keep lists of Trump supporters, writing on Twitter: “Is anyone archiving these Trump sycophants for when they try to downplay or deny their complicity in the future?”

A group of Never Trumpers echoed the banana-republic notion, saying they aimed to punish the president’s supporters. Jennifer Rubin, the odious Washington Post columnist, wrote that Trump supporters “should never serve in office, join a corporate board, find a faculty position or be accepted into ‘polite’ society. We have a list.”

The best response Biden could give is to say that he, too, is keeping a list — of those who continue to stir hatred and division and that he denounces them, regardless of how they voted…

The calls for unity ring so hollow after how the Democrats and the media have treated Trump and his supporters for the last four years. Many are doing it right now.

It comes off like a guy saying “hey, I know I shot your dog, wrecked your car, and stole your fiancé, but we need to come together and put the past behind us…”

I pray for peace, and a healed America beyond my prayers for certain political outcomes, but I cannot seriously believe any of the clowns calling for peace can actually think it is coming. We are just fortunate when conservatives lose, they for the most part act like humans and not animals.

Here’s a flashback to a less controversial election and how people reacted four years ago: 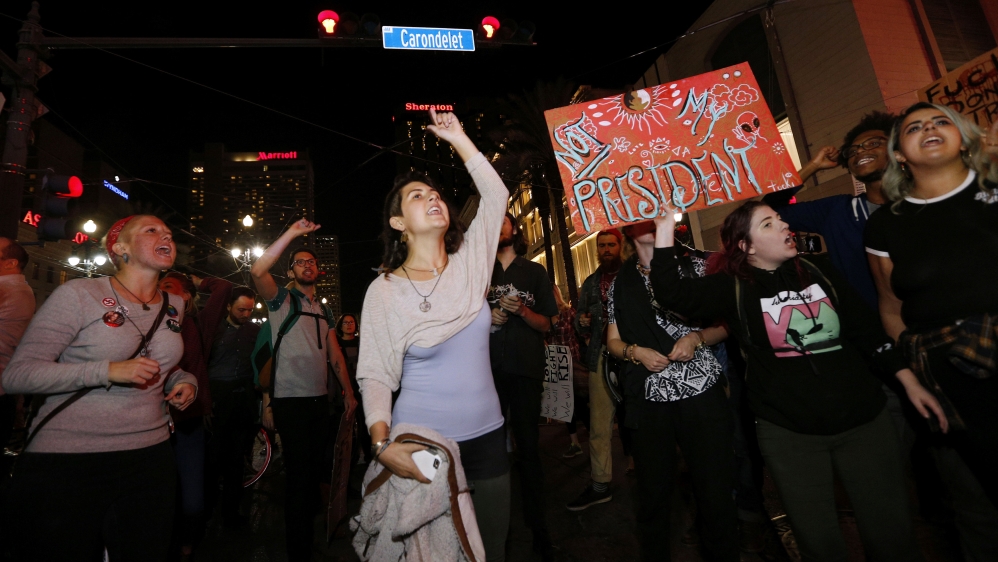 President-elect says demonstrations “very unfair” amid riots in Portland and marches in cities on East and West Coasts.

Unity? Yeah, good luck with that…

Actions do speak louder than words (with respect to unity, etc.).

A house divided against itself cannot stand.
Thanks Democrat-bedding media for much of what’s wrong with this country.