Can someone explain to me in detail how the OF Mass Ad Orientem is said? I was wondering since I am so used to the OF Mass in most places to be said Versus Populum. I was just wondering how it is done.

Also how do you serve an Ad Orientem OF Mass as compared to Versus Populum? Like what are the kneeling positions etc…?

I’m not certain, though I imagine the GIRM can be applied equally ad Orientem.

We’re fortunate enough here at Boston College to have a Latin ad Orientem OF Mass being celebrated on the Feast of the Immaculate Conception next week!

Generally, in the old format, the Priest was on a step higher than the servers. The Majority of the Mass was done with the Priest facing away from the people.

(The Mass always began with the Priest saying, in Latin, “I will go unto the Alter of God”. The server would respond, in Latin, “To God, the joy of my youth”. Sadly, the majority of servers literally had no clue what those Latin prayers actually meant. Even sadder, the vast majority of the Congregation also didn’t have a clue. It was just a ritual, one that they went to every week, without understanding much of the beauty of the Mass.)

Servers commonly wore an Alb and a Surplice, although this was not necessary. While in the US Army, I served daily Mass many times, wearing my fatigue uniform. I never needed a card myself, as I knew all of the responses for Mass, Benediction, etc.

Communion was done by the congregation kneeling at the Alter Rail. The Priest, accompanied by a server, would work his way down the line, giving each person the host directly on the tongue. The server would hold a patten under the persons chin, just in case the host were to fall… Once the end of the line was reached, the Priest would go back to the other end, and start all over again. Other than at a wedding, no one but the Priest received the Eucharist from the Chalice.

The people would get up after they received the host, and someone else would kneel in their place. This continued until all of the people that wished to receive communion had done so.

In larger parishes, Communion could take a VERY long time. In some churches, there would be side chapels, and sometimes other priests would distribute communion at their alter rails too.

I’m not certain, though I imagine the GIRM can be applied equally ad Orientem.

I have a couple of suggestions;
1- youtube.com/watch?v=blM80QeuseQ&feature=related
2- watch EWTN ( daily Mass) make lots notes and practice

The only real difference in an Ad Orientem Mass and Verse Poplum is a) which side of the altar the priest is on and b) where He faces when.

As for kneeling positions, I usually do this, but in the OF, it dosen’t say where to kneel, so you don’t have to, this is just what I always do. 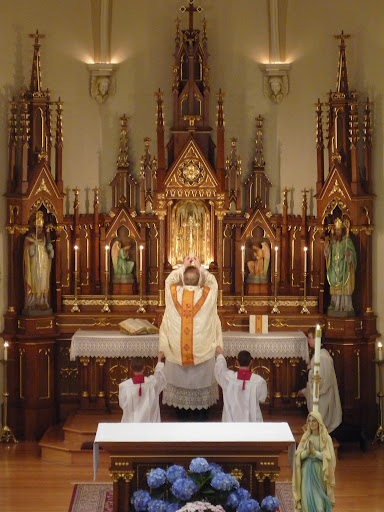 Also, I usually have the servers slightly lift the chasuble at the elevations (as above), but again, this is a personal preference thing. Ask your priest about this one.

That’s all from me. I don’t feel like looking up the GIRM references for when the priest faces the altar, and when he faces the people. The other small thing is that if possible, so that he can turn to the right and receive the water and wine, and wash his hands.

That last thing is pretty minor though.

Can someone explain to me in detail how the OF Mass Ad Orientem is said? I was wondering since I am so used to the OF Mass in most places to be said Versus Populum. I was just wondering how it is done.

Also how do you serve an Ad Orientem OF Mass as compared to Versus Populum? Like what are the kneeling positions etc…?

The GIRM is actually written such that it assumes the priest is ad orientem, and it will specifically tell when he is to face the people. As for serving and kneeling, do as you normally would; it is still the Ordinary Form.

system closed September 20, 2017, 3:54pm #9
DISCLAIMER: The views and opinions expressed in these forums do not necessarily reflect those of Catholic Answers. For official apologetics resources please visit www.catholic.com.