A NEW poll found that nearly 40 percent of registered American voters believe former Vice President Joe Biden has “some form of dementia.” Most voters surveyed in the Rasmussen poll, re…

Most voters surveyed in the Rasmussen poll, released on Monday, think that Biden is suffering from cognitive decline — and think he should address the issue publicly heading into Election Day.

Apparently this has not been addressed. He will be 78. Reagan had Alzheimers but it started early on. He left the president in 1989 at age 78 and already was in the early stage the last few years of his presidency. He lived 15 more years.

Not this voter, but apparently to you…the bigger issue I have, is not “some form of dementia” by Biden as it is the inability to lead as a statesman by Trump…another thread that will be moot in 93 days.

I really think this could have a huge effect on the election. It seems like the kind of thing that ordinary voters would care a lot about.

surveyed in the Rasmussen poll,

Ah, Rasmussen. I’m familiar with them.

There was a pretty good documentary of his life after the presidency. It’s kind if sad.

Look I am no fan of Mr. Trump (I hit the mute button every time he comes on and then later read what he said because I find his voice and manner so appalling but I need to know WHAT he said) but the whole “anybody but Trump’ idea is just appalling. Some of my friends have said they would vote for the corpse of Franklin Pierce over Trump.

To me that just screams Not care for the country, but personal detestation of the incumbent.

If we want to try to ‘rescue the country’ from the grip of a ‘non statesman’ by appointing somebody even if he is in early dementia, what does that say? Hey, we have a terrible president here, let’s replace him with somebody with cognitive decline who could be totally incapacitated early into the presidency, because that’s so much better than now”.

It’s not as if we don’t have better choices out there. Bernie Sanders is as old but far more sharp, and even if one disagrees with his socialism aspects he has always had a coherent and well expressed platform.

Biden relies on his “Obama card” even though the majority of my friends and family found him the ‘weak spot’ in Obama’s presidency, a well=-meaning sinecure who pretty much was out to paint himself as a white-washed Kennedy figure to appeal to the Catholic vote while showing the Protestants he was the “new tolerant breed’.

Andrew Cuomo may have made mistakes in the COVID crisis but at least he was man enough to do things. He is even more a CINO than Biden but he is upfront about it. If you want somebody who will actually LEAD the government as opposed to Trump’s dictatorship and Biden’s “I finally have a strategy, I present myself as ‘not Trump”, certainly Cuomo would be far more appealing.

What I am saying is there is no proof of Biden suffering from dementia, other than questionable social media posts claiming it.

And, what I am saying, if the unsubstantiated claims of dementia on the part of Biden are dismissed, and the paradigm of Biden and Trump are compared, we find the reason for the high disapproval and polling data for Trump.

Some of my friends have said they would vote for the corpse of Franklin Pierce over Trump.

No. President Franklin Pierce had been cancelled. 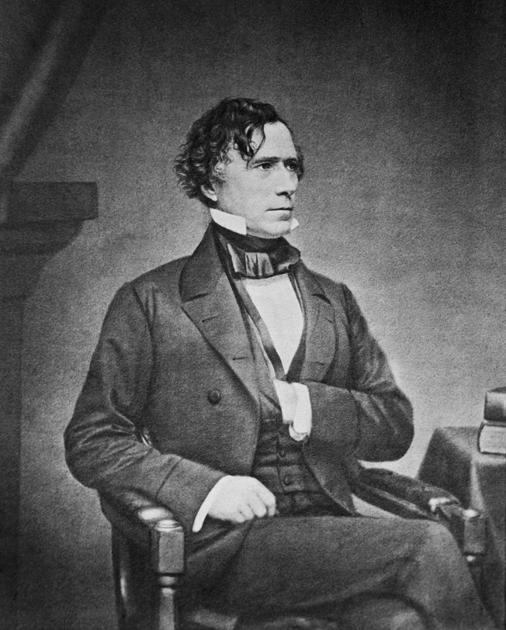 Faculty at the UNH Franklin Pierce School of Law have voted to strip the name of New Hampshire’s only president from the school’s title, citing his failed leadership.

I’ve listened to him speak recently. Not bad.

But of course, I’m waiting for him to be able to say, “person, man, woman, camera, tv”. In order. Because you get extra points.

But of course, I’m waiting for him to be able to say, “person, man, woman, camera, tv”. In order. Because you get extra points.

I guess the democrats need to make excuses for him as he is the candidate the
elites of the party have chosen to run. He is merely a token. Obama and his people will be running the country. Maybe Obama will get a Cabinet position.

I thought it was George Soros who would be running everything?

George is the big player/manipulator. Obama is one of his puppets.

My own opinion is that was not a valid test. I had a dementia test taken for long-term care by an insurance company which consisted, among other things, 10 words which were totally unrelated. Person, man, woman are obviously related. As are camera and tv.

Did you see the Sarah Cooper sketch?

I don’t think those were the words either. I think since he was on tv, he rattled off what was in front of him.

They give you unrelated words from different categories. My son took a similar test after his brain injury to recall words. My mom took that same test when she’d see the neurologist. Different words every time.

Did you see the Sarah Cooper sketch?

What more proof of Biden suffering from dementia do you need? It is so sad.
Why doesn’t his family tell the democrats their Dad needs to be at home and away
from the spotlight making his embarrassing gaffes that clearly show he is suffering from dementia? It is so apparent. If it were my Dad or husband, I would not want him to be used by the democrat party when his mind is clearly going.

Maybe Obama will get a Cabinet position.

I would hope that he would. He was a excellent President and would have a great deal of wisdom to bring to the table.

He is merely a token.

That’s why Trump risked impeachment to find any amount of dirt on Biden in Ukraine.

There is nothing democratic about the democrat party.

Now it is not about whether Joe Biden has Dementia or Alzheimers, its about Trump picking on people with Alzheimers.

Trump brags about his cognitive test. But for those with dementia, it’s...

For many Americans, the test the president keeps trumpeting is one of the most fraught, traumatic turning points in their lives — that moment when they realize their mind is beginning to fail and glimpse the troubled path ahead for them and their...