An Orthodox opinion of the Traditional Mass

Since this involves the Old Rite I figured I’ll post it here.
It involves a Sarum Liturgy, but that’s as much as I know. I beleive many things this writer says is wrong outright, like the Roman Church introduced leavened bread to the Mass, and I can’t believe Rome was very Greek-speaking. Also, it says it was very new and praises the Ambrosian Mass over the Roman Mass because it is more Eastern IMO.
And yes, teh Sarum Rite isn’t the Latin Mass but this article treats it like it is and goes on an attack against the Latin Mass.

"This Liturgy of St. Peter was supposedly uncovered by a ROCOR Priest who had obtained an Old Believer Liturgikon from an Old Rite community in turkey. It specifically is the Aachen mass attributed to St. Gregory the Great, Pope of Rome, but its earliest forms follow him by 200 years, ie the Gelasian Sacramentary. As a frankish rite, it is as suspect as most of the work which came out of their schools, qv these theological schools introduced azymes, deleted large tracts of existing liturgies, destroyed some, and created hybrids which were theretofore nonexistent, stood for iconoclasm and filioque, and went so far as to call the Orthodox “heretics” for not using azymes, their rites, for not reciting filioque and for venerating icons. These rites were used pre-schism but not with Orthodox oversight or input. As such, they should be reviewed and edited by Orthodox liturgists.

Rome, during the lifetime of St. Gregory, was a predominantly Greek speaking city due to large influxes of Hellenic refugees fleeing upheavals in the East. During his period, it is believed the Liturgy was even celebrated in Greek. Rome and N Africa shared a common bond in theology and liturgics. Their rites reflected this and were principally part of the Alexandrian school of liturgy. Hence to look at a variant of the Old Roman mass in toto, one could get a good idea of its true form by reviewing the Liturgy of St. Mark. The Roman Canon defaced by the franks even alludes to it.

Mind you, the rite of Rome WAS NOT the main rite or even a MAJOR rite of the West: it was shared by Rome and her satellite cities which one could count on ones hands. By far the most common liturgical expressions in the West were Antiochian in origin, Milanese, Gallican, Mozarabic. These rites were similar to the Liturgy of the Apostles/Liturgy of St. James (non-Coptic). At the Western imperial capitol of Ravenna, the Liturgy of Milan (Ambrosian) was used.

After the founding of the frankish empire, their reforms stamped Europe with an iron fist. Thus, this liturgical form. There was a Slavonic school of this Western liturgy centered in Dubrovnik. It was descended from the missionary work of SS Cyril & Methodius whose missions were driven by the germans to use a Western rite. Dubrovnik is where this mass was preserved in Slavonic for centuries, but whose range had once reached as far as NE Poland.

Since there were interchanges between Muscovy and the Western Slavs, qv Jerome of Prague, it is possible that this mass may have been presented to the pre-Nikonian Russian church. More likely is the circumstance that Old Rite refugees fleeing to turkey had obtained a copy of the Dubrovnik missal old enough to satisfy their standards of “authenticity.”

During the Kievan period, the prevalent liturgy in use in Rus’ was that of St. Basil, as it was amongst all Orthodox Slavs, Balts, Finns, and Romanians. The western form, frankish mass, was identified with the germans, hungarians, and the crusaders. It was not viewed as Orthodox. One must remember that to the Slav, Romanian, etc. the title “Pravoslavnyi” was chiefly driven by the notion of “lex orendi, lex credendi.” Thus, the heretical latins and their rites were rejected.

Later the Liturgy of St. John Chrysostom gained more frequency, driven by Athonite enthusiasm and authentication of liturgical books (late XIII - XIV centuries). This liturgical emphasis indeed spread to Russia at first under the auspices of St. Maxim the Greek et al and the Stoglav Council and later in an almost authoritarian way under nikon in the North (and by Greek prelates and missionaries in Litovskaja Rus’ before and after florence).

Therefore, this “Mass of St. Peter” was most probably not part of the Russian church’s observance.

As an aside, up until the time of pius ix, there was a “Liturgy of St. Peter” celebrated in Rome once a year. It essentially was the Liturgy of St. John Chrysostom with a latin ordo, probably a survival from the era of St. Gregory the Great, ironically. pius ix served it, termed it “barbaric,” and forbad its further use.

Also, what do all of you know about the liturgy Pope Pius IX termed “barbaric”? I have never heard if such a Mass.

You wouldn’t happen to have a link, would you?

Also, what do all of you know about the liturgy Pope Pius IX termed “barbaric”? I have never heard if such a Mass.

I don’t know about that Mass.

There are many ways this could have come to Rome, there were many Popes from the East, possibly twenty or more. As the author states it is “probably a survival from the era of St. Gregory the Great”. I don’t know how he can be so certain of this, but Saint Gregory the Great did spend a lot of time in the east before being elected to the See at Rome. The notion that he might have carried an eastern form of the liturgy back to Rome is sort of romantic, it seems to me. He is remembered rather fondly.

As an aside…In the Eastern church, during Lent, a Liturgy of the Pre-Sanctified Gifts is served. All over the Orthodox world it is associated with St Gregory diologos. 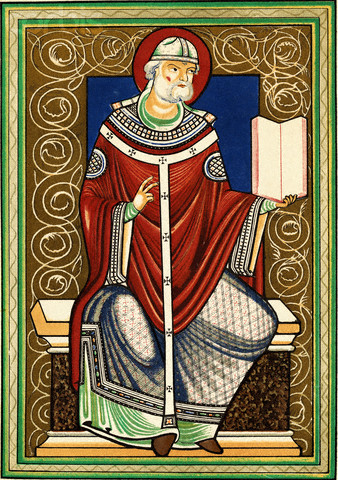 *[LEFT][FONT=Arial][size=2]Saint Gregory is famous for his “Dialogues” which were very popular in the east long ago. He probably did not originate this Liturgy, but he described it, so his name is associated with it in the east as the Liturgy of Saint Gregory Dialogos.[/size][/FONT]
[/LEFT]

I need to post the link, so here it is.
monachos.net/forum/showthread.php?t=3111

In the west St Gregory is remembered for adding the name of St Andrew to the embolism after the Lord’s Prayer in the Mass. Because of this and the belief that be codified Gregorian chant the Mass is called the Liturgy of St Gregory the Great. He added Apostle Andrew’s name (…atque Andrea…) because the monastery he was from was named after St Andrew.

That’s just about the only thing in that blog post that I can say is more-or-less true, at least in a way. Educated Roman citizens generally spoke Greek. (Look at S Paul for example.) It was normal for the patricians to have Greek slaves as teachers. And, at least until the 3rd century, the Greek language was used for liturgical purposes in Rome itself.

The rest of that blog post looks like a lot of hot air from someone with an axe to grind. I also noticed that the poster was banned from that forum. Hmmm.

So we consider Latin the great language, but the Romans considered Greek better? How ironic!
I still think Roman Catholics should use Latin in the liturgy, not because it shows unity if the rite necessarily (we could still be using Greek), but rather, because our tradition is ROMAN. My belief in the Greek Kyrie is that as we ask God for mercy, we unite ourselves with all other Christians who ask for mercy, so we use another language to show our unity with all Christians.
My little mystical justification (I have a lot of them) for St. Andrew’s inclusion there is that he was the first called disciple, so he gets an extra credit there.

system closed September 20, 2017, 3:29pm #9
DISCLAIMER: The views and opinions expressed in these forums do not necessarily reflect those of Catholic Answers. For official apologetics resources please visit www.catholic.com.