Andrea Grillo: Regarding the Ecumenical Mass and Intercommunion

Andrea Grillo, professor of sacramental theology at the Pontifical Atheneum of Saint Anselm in Rome and confidant of Pope Francis, speaks out on the Ecumenical Mass, rumored for over a year now, and the prospects of non-Catholic Christians receiving the Eucharist: 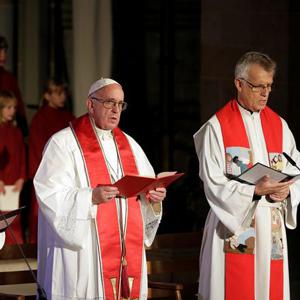 “We know that the various Christian traditions, after misunderstandings, struggles, bloody divisions, silences and indifferences, have also been working for some decades to recover lost communion. It is not at all scandalous that the quest for communion is to have a relationship with the celebration of the Holy Supper, Holy Mass, and Sacred Liturgy. It should not be considered only as “the ultimate ambition”: in fact, “Eucharistic communion” is not just at the end of the path, as the final reward for reconstructed communion. No, the opposite must also be true. It may be true that different traditions, different languages, different imaginations, which are mutually recognized in baptism in the name of Jesus Christ, may revive their communion “beginning” from the Lord’s Supper. The fact that Mass and liturgy may not lie at the end, but in the beginning, is a possibility which should be rediscovered and valorised. As a way of initiation, and to let oneself be initiated, and not as a conclusion.

…[there are] at least three levels of experience of the Eucharistic liturgy on which traditions have been highly differentiated that I would like to outline:

a) The Body of Christ - sacramental and ecclesial - as it is understood and lived;
b) The structure of the celebration and its relation to the “sacrifice of Christ”;
c) Ministries with authority and mutual recognition among the various confessions.

What we can identify on these three levels as problematic or as unacceptable should not be solved in advance, almost as a condition sine qua non: true discrimination lies not in this “prior doctrinal agreement” that would enable one common liturgical practice. Rather, as a “preamble”, there should mature in different denominations a willingness to review the differences not as a “lack of communion”, but as “Differences in communion”. Different theories about presence, different understandings of the relationship with sacrifice and various ways of exercising authority have been perceived in history as serious motives for “breaking communion.” Everyone felt denied by the other…[today] these same differences can become motives of “wealth in communion.”

…it is not, therefore, to invent an “ecumenical mass”, but to recognize that the Eucharist is, in itself, fundamentally a question of unity, an ecumenical question.”

On his personal blog, Dr. Grillo brushed off accusations of heresy and modernism from a concerned reader with the defense that “God is not Catholic”.

Dr. Grillo brushed off accusations of heresy and modernism from a concerned reader with the defense that “God is not Catholic”.

I thought that Jesus established the Catholic Church?

This sounds dangerously close to heresy and of a mindset that is directly opposed to Catholic teaching. Luckily there are those in the hierarchy who will speak out against such dangerous views:

From what I’ve read on the subject, the idea of Ecuminical Mass and shared Holy Communion, isn’t on the Vatican’s radar, but a new boogieman concept created by some on blogsites.

From what I’ve read on the subject, the idea of Ecuminical Mass and shared Holy Communion, isn’t on the Vatican’s radar, but a new boogieman concept created by some on blogsites.

I think the OPs statement “rumored for over a year now” supports that.

Even Dr. Grillo says as much. The new element, however, is that he has publicly revealed the thinking of a certain faction in the Church—that the rumors of an “Ecumenical Mass” are false, but only because there is no need to invent an ecumenical Mass in the first place, as the current Mass can be reappropriated as a vehicle for intercommunion. This “reinterpretation” of the Mass is already being implemented in specific areas, such as in the archdiocese of Turin: 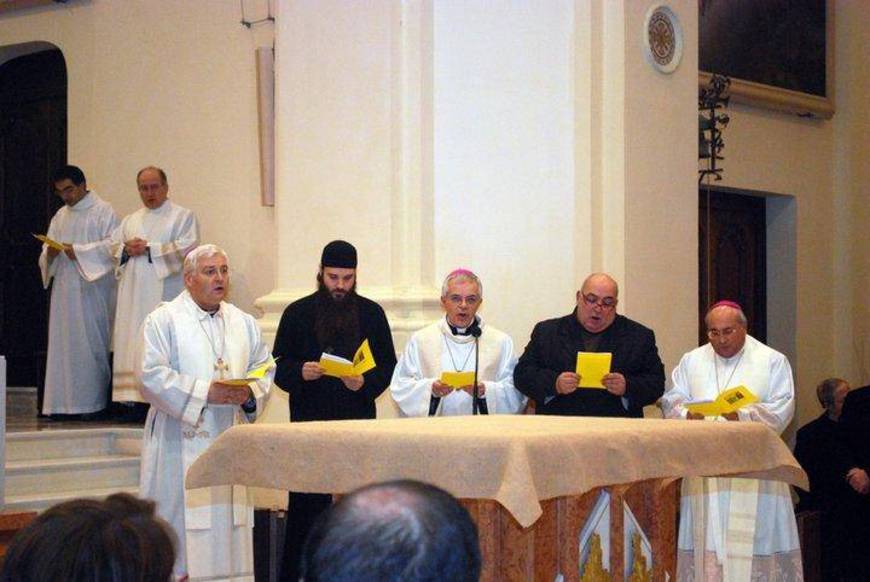 Catholics and non-Catholics have received communion together in an "ecumenical mass" promoted by the Archdiocese of Turin.

The group “Spezzare il pane” (“Breaking the Bread”) in the archdiocese of Turin, Italy, has officially started with the celebration of “ecumenical masses” where Holy Communion is distributed to Catholics and non-Catholics.
The group is headed by Catholic priest Father Fredo Oliviero, an apologist for illegal immigration, who has the support of his archbishop, Monsignor Cesare Nosiglia. The practice of the group to distribute Holy Communion to non-Catholics, is openly promoted in the newspaper of the Turin Archdiocese “La Voce e il Tempo”.

Among the members of the group are “Catholics”, Anglicans, Baptists, Waldensians and Lutherans. They gather once a month in one of their churches, where they celebrate a “Eucharist” according to the respective denomination, distributing “Communion” to everybody.

It is now customary that once a month, the group meets in a Catholic, Lutheran, Waldensian, or Baptist church to share the “Eucharist”, partaking in worship or Mass – officiated according to the liturgy of the host church. According Fr. Fredo, the ecumenical ceremony replaces “in the foreground the identity of Christians with respect to belonging to a specific Church.” He likewise said that the practice is spreading in other cities in Italy as well.

It remains to be seen whether the Vatican will crack down on such activities and discipline the parties involved.