This is another example of the problem with the
Fake News Industrial Complex
pretending they are quoting high level “anonymous sources”.

When this occurrs, at least some of these “anonymous sources” turn out to be nothing but manufactured FAKE quoting of themselves or disgruntled ex-employees.

Yet you can still find news snobbery ideas that for all practical purposes say with their actions something to the effect of . . .

They eat this up.

Taylor denied he was ‘Anonymous’ in August interview with CNN

By Joseph A. Wulfsohn

The anonymous senior Trump administration official who authored the infamous New York Times op-ed in 2018 declaring to be part of the “resistance” revealed himself on Wednesday to be former Department of Homeland Security chief of staff Miles Taylor. . . .

. . . Taylor was hired by CNN as a contributor in September. However, it is now known that he lied to the network by denying authorship of the op-ed during an Aug. 21 interview with his now-colleague Anderson Cooper.

“There was an op-ed, there was a book by someone calling themselves ‘Anonymous.’ Are you aware of who that is?” Cooper asked.

“I’m not,” Taylor responded. “Look, that was a parlor game that happened in Washington D.C. of a lot of folks trying to think of who that might be. I’ve got my own thoughts about who that might be, but-”

“I wear a mask for two things, Anderson: Halloweens and pandemics. So, no,” Taylor answered. . . .

. . . a spokesperson told Washington Post’s Erik Wemple that Taylor will remain as a contributor despite his lie to Anderson Cooper. . . .

. . . Press Secretary Kayleigh McEnany released a statement knocking Taylor as a “low-level, disgruntled former staffer,” as well as "a liar and a coward . . .

“He was ineffective and incompetent during his time as DHS Chief of Staff which is why he was promptly fired after only serving in this role for a matter of weeks,” . . . “It is appalling a low-ranking official would be granted anonymity and it is clear the New York Times is doing the bidding of Never-Trumpers and Democrats.”

The big reveal turned out to be a big letdown on social media.

“It’s an embarrassment,” Axios reporter Jonathan Swan reacted. "I also didn’t realize the definition of ‘senior administration official’ could be this expansive. . . .

. . . The widespread impression at the time of the NYT op-ed was that ‘Anonymous’ was someone who actually advised the president," ABC News … posted. . . .

The anonymous senior Trump administration official who authored the infamous New York Times op-ed in 2018 declaring to be part of the "resistance" revealed himself on Wednesday to be former Department of Homeland Security chief of...

I have no idea who this guy is. I do not watch CNN.

As I understand they said he was a high ranking official, and that was the lie? ok. How close to the president is he? What is the chain if command he has?

This story is crazy! It turns he was in his late 20’s and chief of staff to the secretary of homeland security when he was writing his “anonymous” articles to the ny times. So there are two outrageous things going on:

-the NY times knowingly published stuff from someone who is an assistant to a department secretary rather than direct decision maker, while allowing it to be implied that this could be from someone like the white house chief of staff or secretary of defense.

-the department of homeland security hires 28 y/o’s with no revelant work experience to be its chief of staff as opposed to say retired Coast Guard admirals, former heads of us border patrol, former ambassadors etc etc.

What a typical misleading title!

Yes, he admitted the lie. He also explained his reasoning under good scrutiny by Chris Cuomo. No softball questions were presented. It was an excellent piece of journalism. Of course if you never watched it, you can just swallow whatever the talking head on Fox or Breitbart tells you.

What a typical misleading title!

Here is the thread title again.

Zake. Both CNN videos that you posted actually SUPPORT the title.

I think you should go back and re-view the videos you posted.

you can just swallow whatever the talking head on Fox or Breitbart tells you.

And perhaps most embarassingly of all,
the New York Times itself admitted it, but did not even attempt to defend their actions saying, “We don’t plan to comment further.”

And if you read the OP article

Most liars are quite good at explaining their lie, given the opportunity

Agreed, there is no way to rehabilitate this charade perpetrated by the left leaning media.

For some balance, Fox did its own gymnastics to softly back pedal its Hunter Biden coverage yesterday. Buried within its opinion pieces it noted the China arrangements happened in 2017 when Biden was not VP, then sanctimoniously faulted the liberal MSM for missing this because they refused to even cover the story. Lol.

Why Did CNN Publish Anonymous’s Claims without Verification? | National Review

Years ago such a major accusation would never have run without any corroboration, much less from an anonymous source.

Yes, he admitted the lie .

Is lying okay? Can we tell when he is lying? How can anyone believe what he says?

The continuing fall of the once respected NYT.

Then what’s your point?

My focus was on the Times faking out its readers making them think this was a high level cabinet member (the msm floated the idea of Nicky Haley and I remember that well).

Not that Taylor doesn’t NOW “admit” anything.

It’s really a form of FAKE NEWS by the New York Times. If you look low enough in any corporate ladder (how much more the Government), you can find people sitting around “the break room” carping about their employers.

This was manufactured news by a lying Taylor
and a lying New York Times
(for pretending this was the story they made it out to be).

. . . In a news article following Taylor’s decision to come forward, the New York Times boosted his authority by describing him as “frequently in meetings with top White House officials and sometimes with the president.” Taylor, the New York Times said, “had access to the decision-making meetings in the department and with other agencies about a range of topics such as immigration, cybersecurity, terrorism and border security.”

This, by the way, is the jargon of every lame political staffer in Washington trying to impress a girl by convincing her that he’s more than a gofer, more than a cog in a massive, cumbersome wheel.

Anonymous sources for news stories aren’t always the demons that President Trump portrays them as. However, reporters are expected to weigh what they have to say and sift through them for useful information while cutting out the fat and discarding the things that can’t be proven or, at least, come with considerable doubt.

By contrast, the New York Times put its full weight and authority behind a middling bureaucrat, allowing him to author an entire article with serious and consequential charges against a sitting president, from within his administration, and all under anonymity. 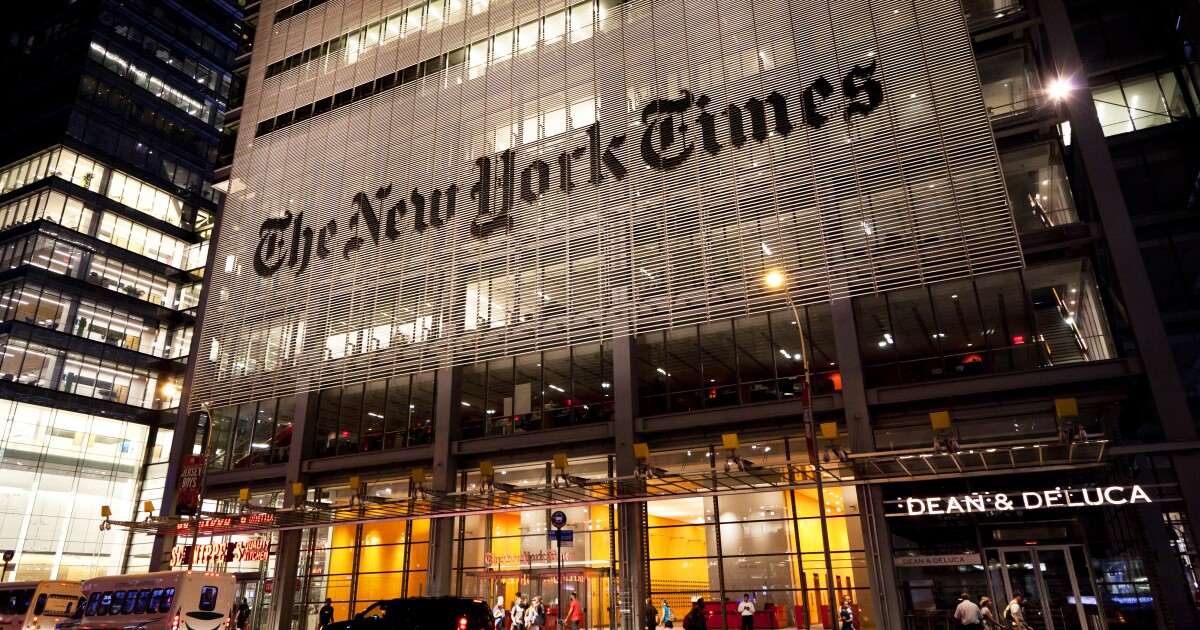 How the New York Times ruined itself in the Trump era

With the revelation this week of the author of that notorious "Anonymous" op-ed in the New York Times, it's settled: The paper of record is broken.