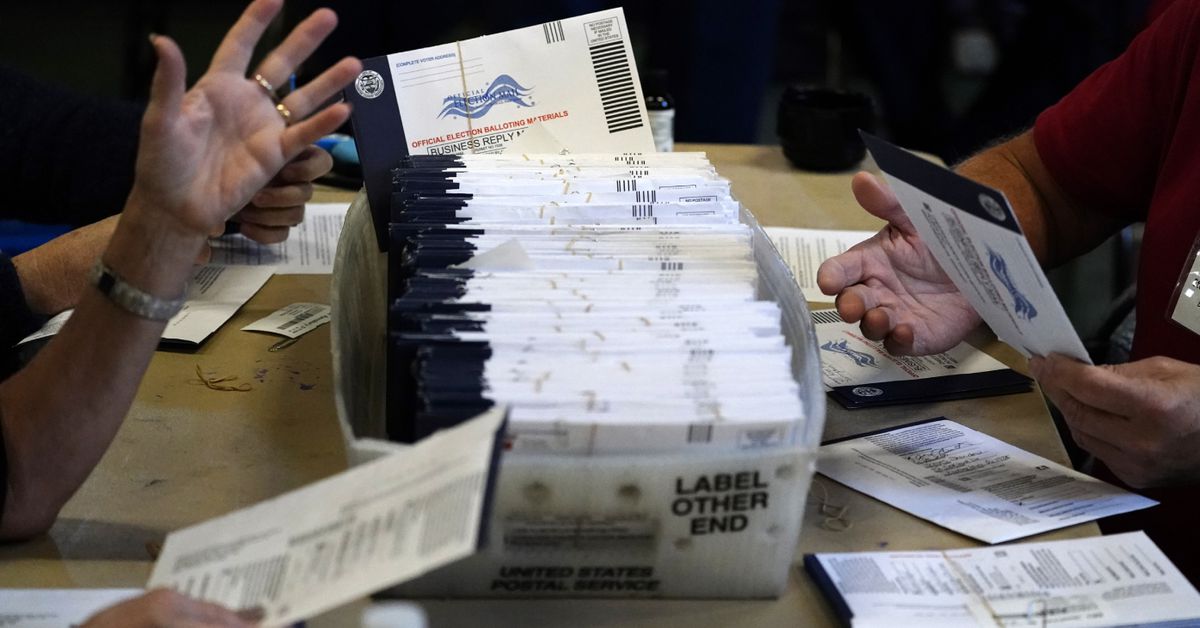 The head of an international delegation monitoring the US election says his team has no evidence to support...

so far and certainly not by us anonymous internet posters. It is being placed in the hands of the authorities.

and certainly not by us anonymous internet posters

You wouldn’t know that from reading a good number of posts on CAF.

You wouldn’t know that from reading a good number of posts on CAF.

that works both ways

that works both ways

You don’t think posters should quote authorities who say there’s not an election being stolen? Nope, sorry.

You don’t think posters should quote authorities who say there’s not an election being stolen?

You can post it if you would like. I’m not sure why you are saying I think not when I haven’t said that.

One might expect police to have the function of maintaining peace, not supporting a protest.

What have they been doing to maintain the peace for the last 5 months of “mostly” peaceful protests that have resulted in people being assaulted and murdered, the loss of buildings/businesses to vandalism and arson, theft of merchandise, disrupted vehicle and pedestrian traffic and mass destruction of public and private property?!? … Now you want them to begin "maintaining the peace

Now you want them to begin "maintaining the peace

I have not indicated what I want within that post.

Realize everyone, that in many other countries, this fraud would have brought many, many, many people to the streets.

Then at the bottom of the page, there is a little comment: - With CNN

Nice catch. I saw it after you pointed that out.

More than 200 people - predominately Trump supporters - gathered outside the Maricopa County Elections Department, some of which appeared to be armed.

They also wrote about the contrast on some protests, with out explaining why. Lazy journalists. One is saying to keep the count, because they are winning, so they are exited. They want to win.

The other ones where chanting “Stop the count” because poll watchers where not being let in by some reports, and this went to court. So they wanted the count to stop until poll watchers could go in.

But this is the only thing they wrote, why? Laziness? Uninformed? Bias? Who knows. But misleading.

The crowd yelled “count the votes” - a stark contrast to similar demonstrations just hours earlier in Detroit, where Trump supporters urged officials to “stop the count”.

I just read an article in the Guardian that Facebook banned a Trump group that was calling for violence.

Many Republicans weren’t pleased with Trumps speech declaring he won…again…which they pointed out is false. Everyone seems to be calling for patience and let our process of vote counting to continue so everyone can be assured that our election is accurate and legal.

So, I’m going to do just that. I’m going to let the process do it’s job and that any cheating will be investigated and prosecuted if necessary. When the counting is done, we will know…and not until then.

zy journalists. One is saying to keep the count, because they are winning, so they are

It’s far easier to stop counting than to keep counting efficiently, especially if you have mob rule on top of you. Just sayin.

That was the news article title on the page, so I left it. I think thats world news rules.
Although the presence of the heavily geared up law forces means something is potentially going on. There are photos of armed civilians

The more I think about this whole thing, The more if Trump wants a recount, why not. They all have until inauguration day dont they? Thats plenty of time to actually reveal fraud evidence, examine it in court, and recount if thats appropriate.
I agree with journos and commentators saying Trump has to produce the evidence of his allegations though re today’s news conference

I just read an article in the Guardian that Facebook banned a Trump group that was calling for violence.

I just read about a group that had 300,000 people that Favebook deleted because it was spreading election misinformation. I wonder if the groups had overlap.

Edit - I turned on NPR and they spoke about it. It is the same group.

I pray Trump refuses to concede and, God willing, the military will side with him.

You’re praying for a military coup???