At what point did the Catholic Church get on board with the general outcomes of the Peace of Westphalia?

Pope Innocent X was pretty well set against it, as he spelled out in Zelo Domus Dei. translate.google.com/translate?hl=en&sl=la&u=http://la.wikisource.org/wiki/Zelo_Domus_Dei&prev=search

Who was the pope that reversed this trend? For how long was the papacy set against the Peace of Westphalia? Were there other popes who were similarly opposed, quietly or otherwise?

This was, as far as I know, an incredibly unique moment in European history when a pope issued a bull condemning something and declaring it null and void, and in response every important European ruler (both Catholic and Protestant) completely ignored it and acted as if it didn’t exist. That must have really stung. Was there any further comment by the papacy on this matter, or did the Vatican treat it as a little moment that they, too, were willing to forget about as quickly as possible?

Westphalian nationalism is incredibly important to global affairs, and it really did make a lot of difference to the Catholic Church. There was also this papal bull that opposed it. How exactly did the Catholic Church resolve all of this, and who was it that brought it to pass?

Could you please explain what Westphilia… is? The word etymology seems to suggest “West-love”, but I don’t understand exactly what is being addressed with your question.

Also, just a small suggestion, I wouldn’t use google translate for stuff like this. There are nuances to language and meaning that no automated translation service is able to capture. I believe the Vatican website may have this and other Papal Bulls translated and available for reading. You might get a better picture of what was being said from that.

The Signing of the Peace of Westphalia 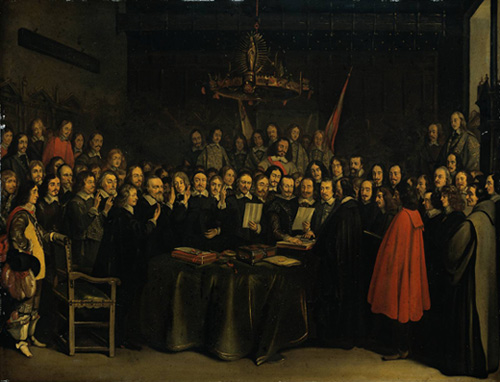 Could you please explain what Westphilia… is? The word etymology seems to suggest “West-love”, but I don’t understand exactly what is being addressed with your question.

The Peace of Westphalia brought an end to the Thirty Years War that devastated much of Europe and essentially established the Lutheran and Reformed churches’ right to exist. Part of this also brought Spanish recognition of Dutch sovereignty. historytoday.com/richard-cavendish/treaty-westphalia I imagine that the Pope was rather put out at the outcome of the whole thing.

Wow… and here I thought I was good with history… I’m going to go hide in a corner now, please pay me no mind >_>

As for -why- the Pope would denounce it. Well, mainly for the same reasons he’d denounce any other heresy. Not to be offensive, but form the Catholic perspective, the people who left the Catholic Church to form or join the Luthern Church were heretics who were in schism with Rome. The bull wouldn’t be so much ignored anymore as no longer as applicable as it once was. Subsequent generations of Lutherns wouldn’t be considered heretics because (most of them) did not make the conscientious decision to leave Catholicism, and instead were born into the sect through no fault of their own.

Others might have better explanations because I don’t have a lot of information regarding this. However, I do know the following:

Politics in “Germany” or the Holy Roman Empire back then was very complicated due to the fact that there were many different principalities loosely (very loosely) united under one elected Emperor.

Some principalities were ruled by local kings, princes, archdukes, dukes, earls, counts, prince-bishops, etc. The prince-bishoprics were where those areas were theocracies, where the Local Bishop was also the secular administrator of the area. In those situations, the bishop was playing two independent roles. That of diocesan bishop and that of local prince. In the bishop’s role as Bishop, he answered to the Pope. But in the bishop’s role as prince, he did not. Hence, it was a complicated system and why the Church no longer allows this to happen.

Where the largest issue would come in is when a prince-bishop’s two different roles would be in conflict with one another.

Now regarding the Pope’s disapproval via Zelo Domus Dei: this is more complex that it would seem. The Pope isn’t infallible when it comes to political matters. However, you will never have a Pope lie down and be accepting of heresy or sin becoming legalized. Additionally, part of the settlement meant that local prices, dukes, etc. were able to choose the religion for their people, not that the people would choose their religion on their own. The Church would have not condoned Catholics being forced or coursed into Protestantism by their local government (which is what happened in my locations). Nor would the Church condone baptized/confirmed Catholics to leave the Catholic Church. The Bull would be really directed to those baptized/confirmed Catholics who left the Church on their own and/or the leaders who were forcing Catholics to leave the Church.

Additionally, for some princes, dukes, etc.; their main reason to become protestant wasn’t religious. It was greed, as they wanted to seize Church lands for themselves and bring them under personal control.

system closed September 20, 2017, 2:28pm #8
DISCLAIMER: The views and opinions expressed in these forums do not necessarily reflect those of Catholic Answers. For official apologetics resources please visit www.catholic.com.