Belgium’s King Philippe has expressed his “deepest regrets” to the Democratic Republic of Congo for his country’s colonial abuses.

The reigning monarch made the comments in a letter to President Félix Tshisekedi on the 60th anniversary of DR Congo’s independence.

Surely, among the worse in colonial rule.

Belgium controlled the central African country from the 19th Century until it won its independence in 1960.

Almost all the Belgians influential in perpetrating abuses before 1960 are likely dead. This is an example of the fake repentance in fashion now. Confess the sins of your great grandfather! No need to confess your own sins, since you don’t have any, just mistakes, bad choices, misunderstanding, etc.

DR Congo is very interesting, the subject of “Heart of Darkness”, I think, it was actually Mark Twain who was outraged by the abuses there. It’s a very fascinating country.

There is a slight air of normalcy there now.

Coltan and Cobalt for our phones and actually, about the most high quality in the world at that, uranium that went into the atomic bombs dropped on Japan, more mineral wealth. All of this is from DR Congo.

Fingers crossed, it has cooled some with the occasional sporadic violence still.

Thank you for your response.

Everyone knows, the era under King Leopold was very bad.

It’s all a bit like “Blood Diamond”, which is Sierra Leone, quite a distance away but the concepts are similar.

What a beautiful gesture. This is one of the last of colonial powers to seek amends and forgiveness. Some of us were even alive during the time this rule ended, or can remember the nation of the Belgian Congo.

! No need to confess your own sins,

No need to confess your own sins, since you don’t have any, just mistakes, bad choices, misunderstanding, etc.

Not that King Phillippe said that . . .

Just in my opinion, DR Congo is a case of the worse, maybe one could say there was a large scale of human rights abuses.

The above are actually two good movies on Netflix on Democratic Republic of Congo…pretty informative, that 2nd movie there on Jadotville based on true facts is when the United Nations so-called peacekeeping force in 1960 were a few troops of Irishmen actually. It’s a real curious story and they defended this UN outpost from a mix of Europeans and Africans. (Pardon me for mentioning netflix which may donate to questionable causes sometimes, there is a discussion on this but I still think these are good films). “Sarah’s Notebook” above is actually a Spanish made film with English subtitles, I do enjoy the movie itself quite a bit.

Anyway, there is a lot of real history.

Not to be forgotten is “A Nun’s Story” with Audrey Hepburn, that Nun is in the Congo for a good part of that movie.

There is some stuff on youtube too, documentaries. I watched a short film on one commander of the UNITED NATIONS troops in Congo, a Brazilian General in fact, but he seemed like a pretty good guy.

There’s a book called “King Leopold’s Ghost,” that is also supposed to be very good.

I’d normally agree with the “before my time” defense but King Leopold, well, I was trying to stay away from saying it, not being an expert, but he probably was a real monster.

They cut people’s hands off and anyone can check any of the search engines and find pictures of it. It’s not fit to post here.

If Belgium never apologized for it before, good, they did now. Some of these people did too foul of things, learn history. Absolute viciousness… and I mean, we are talking about the Kings of Belgium, a direct lineage.

The Butcher of Congo: King Leopold II of Belgium.

In the 23 years (1885-1908) Leopold II ruled the Congo he massacred 10 million Africans by cutting off their hands and genitals, flogging them to death, starving them into forced labour, holding children ransom and burning villages. The ironic part of this story is that Leopold II committed these atrocities by not even setting foot in the Congo.

It was especially bad… but we may have our reckoning as well some day. I don’t say I welcome that, I’ve got my Slavic heritage, Slavs were slaves. According to the logic being presented and I’m not saying I agree with it, perhaps, I’d be entitled as well.

Because what happened in Congo particularly under Leopold II is unconscionable, and the events prior to 1960 continue to have echoes and effects today.

Is the current Belgian King accompanying this expression of regrets with anything tangible, such as donations from his personal funds to a Congolese charity?

Almost all the Belgians influential in perpetrating abuses before 1960 are likely dead. This is an example of the fake repentance in fashion now. Confess the sins of your great grandfather! No need to confess your own sins, since you don’t have any, just mistakes, bad choices, misunderstanding, etc.

If it had happened that my grandfather had massacred most of your family sometime in the 50’s for whatever reason and we eventually met then I think it would be the correct thing for me to do to express my deep regret to you for what he had done.

This today, accompanied the taking down of a statue of King Leopold. No, I don’t think any reparations were offered. 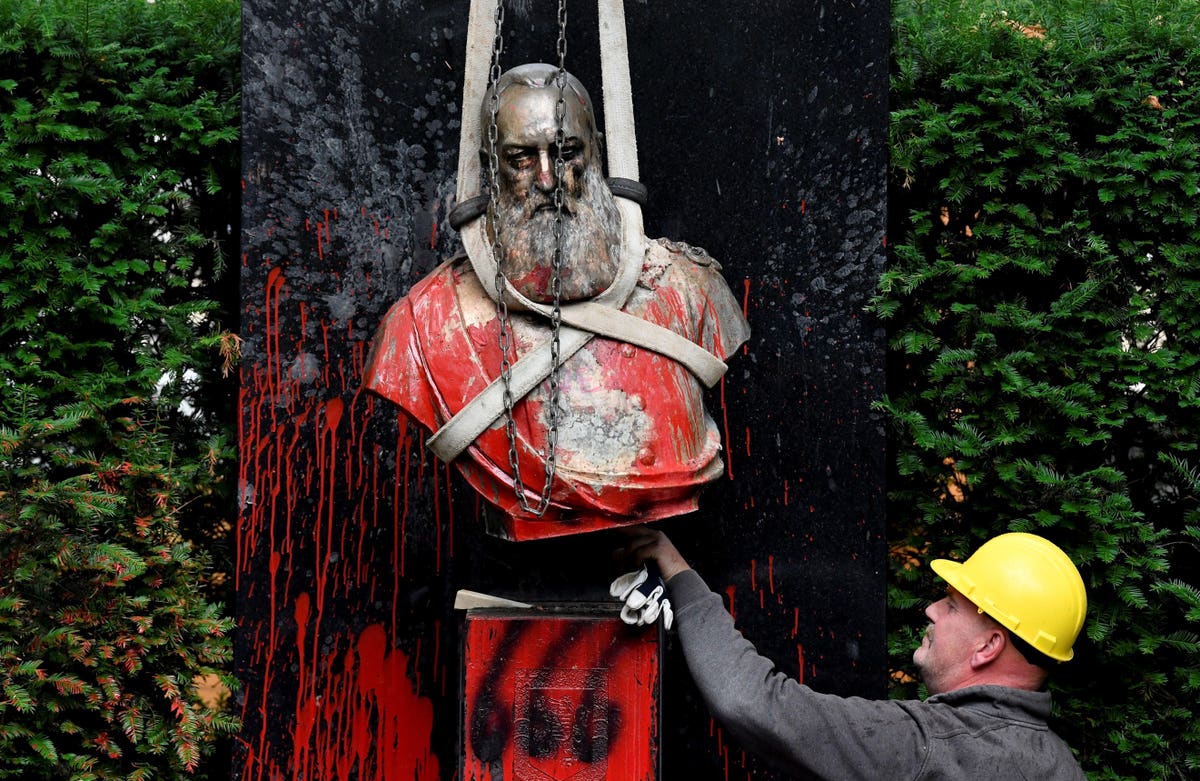 This is why statues of a 19th-century king are being torn down now.

Another statue of King Leopold II, a 19th-century Belgian colonizer king, has been taken down in Ghent as his descendant, the current King Philippe of Belgium, expressed remorse at the role his ancestor played in the “acts of violence and cruelty” that took place in the Congo.

The bust was removed just hours after King Phillipe expressed regret for his ancestor’s actions Tuesday in a letter to Congolese president Felix Tshisekedi, though he notably stopped short of issuing a full apology, a move that could make Belgium vulnerable to claims of reparations that the United Nations recommended in 2019.

It’s quite possible in 1900 Leopold or another high official could have repented for some evils their great great grandparents had done 120 years before 1900
(ignoring what evils current Belgians themselves were perpetrating or complicit in during their present.).

In 2140, a future king might confess and repent actions/omissions for Phillipe and other Belgians in our time - their ancestors - for perpetrating and allowing, and silence on the abortion massacre of 2020.

Obviously confessing the sins of other people is always safer than confessing current sins people like you and me are committing or condo ing. The problem with Phillipe is the current evil he is silent in, or directly complicit in (signing euthenasia for children legislation).

It’s my understanding that many statues of King Leopold were already taken down years ago and placed in museums because of this. I’m surprised there are any left to still remove.

You could also say we don’t know what’s in his heart. Unless God has granted you some special insight?

Yes, you could say that, but assuming bad motives without evidence seems uncharitable. Almost like following the current internet fashion that mandates we be outraged by everything at all times.