Catholic Bibles Without Annotation or Introductions

Hello Everyone. I am new to the forum. Could anyone recommend a good Catholic Bible (with the Deuterocanon) which is just the plain text,without any introductions or notes. I am having real difficulty finding anything, I already have Catholic study Bibles. There are some Protestant translations which seem ok but of course they are not complete. I would be grateful for any advice

I am unable to reply though but thanks to anyone who can help.

The RSV CE has “limited” notes.

Catholic Bibles will have some notes to one extent or another…

Zippered Thin-Line RSV-CE Bible from Oxford University Press
timhollingworth.blogspot.com/2014/01/zippered-thin-line-rsv-ce-bible-from.html
This is my all time favorite Bible. 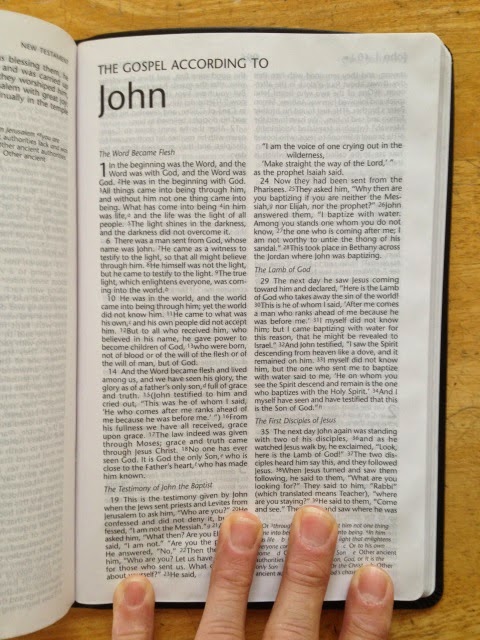 Thanks for the replies so far. The Go Anywhere Bible looks like it would be worth trying. It is available for quite a low price on line, although I am very happy to hear other suggestions.

I had that leather-bound RSV-2CE edition, with the zipper. I was dissatisfied with it, because the print was so small.

It’s been a long time since I spewed out my opinion about Bibles, and such. You might get by with a Bible and the Catechism of the Catholic Church, and all that under $60, total.

but, I suggest that people decide on a figure in their mind, about how much they want to spend, let’s say, in the next ten years, on Bibles and commentaries.

Or to put it another way, how much SHOULD you spend?

The problem I’ve run into is my runaway spending. I always find something new in the next book I buy. I’m just hooked on that. I can’t get enough.

I have the Jewish Study Bible, The NIV Study bible, Strong’s concordance, RSV-2CE, Ignatius Study bible (NT only, so far). Everybody doesn’t need that, or have time to look over these. At times, though, I’m off on a chase from one book to another – and for good reason – translations vary, and the RSV-2CE is (let’s politely say) vague or incomprehensible here or there. Sometimes, the meaning is altogether different in different Bibles, or just unclear.

the footnotes in Bibles vary, of course, and sometimes they leave you will questions that just hang there. Read about the cities of refuge, in the Old Testament. If a man accidentally killed another, he would flee to a city of refuge and stay there until the death of the high priest in Jerusalem. OK, so you have no footnotes, etc., why does this make sense, that the man can go home after the death of the high priest?

I found a possible answer to this question, but it was not even in a study bible. So, what do you do with these verses, when you come across them? Why is this particular verse important? (And, I know, who cares?) I’ve probably passed the $1500 level of spending, to finally find a proposed answer to this question about the death of the high priest. Well, I’ll be seeing you later, I guess.

I had that leather-bound RSV-2CE edition, with the zipper. I was dissatisfied with it, because the print was so small.

The zippered Oxford Bible pictured is the RSV-CE.

It is not the 2nd Catholic Edition.

One reason you’re having difficulty finding a Catholic Bible without notes is that Catholic Bibles are supposed to bd published with notes.

Can. 825 §1. Books of the sacred scriptures cannot be published unless the Apostolic See or the conference of bishops has approved them. For the publication of their translations into the vernacular, it is also required that they be approved by the same authority and provided with necessary and sufficient annotations.

§2. With the permission of the conference of bishops, Catholic members of the Christian faithful in collaboration with separated brothers and sisters can prepare and publish translations of the sacred scriptures provided with appropriate annotations.

Both the Douay-Rheims (Challoner w/o Haydock commentary) and the Ignatius RSV have limited notes, that are easy enough to ignore.

system closed September 22, 2017, 8:16am #9
DISCLAIMER: The views and opinions expressed in these forums do not necessarily reflect those of Catholic Answers. For official apologetics resources please visit www.catholic.com.