Catholic Mass done unlike any you've ever seen

St. Mary’s should be felt both ways – empty and full.

With no one in the pews, it’s a monument of soaring arches, stained glass and carved marble, where your voice instinctively sinks to a whisper – so impressive it’s the only Catholic church in Virginia to earn “basilica” status, chosen by the pope as a special place of pilgrimage.

Packed with worshippers, it’s even more remarkable: the only African American basilica in the country, a place where an overwhelmingly black flock is led by a white priest with Irish roots and the formality of ancient rituals pulses with stand-up-and-shout soul.

Thanks! I’ll check it out.

Thanks for the intriguing article. My favorite segment was from the comments of parishioner Tom Bomar, a convert to Catholicism, and ethnically Afro-American.

“Everyone is welcome here,” Bomar said. “Black church? White church? Those are just barriers people put up. You recognize a decent person by their character. Anything else is superficial.”

Race is no barrier between this flock and its shepherd. In Protestant churches, where congregations often pick their own pastors, skin color usually matches between pulpit and pew. But the hierarchy of the Catholic Church shuffles its priests around, and with few black ones to choose from, rotations tend to be color*blind.

“Our last priest was black,” Bomar said, “and he got sent to a white church in Petersburg. I like that. It reminds everyone that the pastor does not own the church. It gives a humble spirit.” 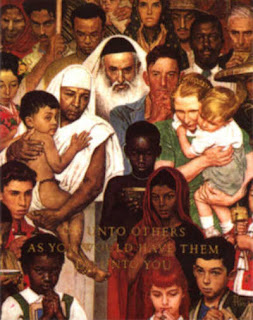 A famous Norman Rockwell Illustration of peoples from various cultures, races, and faiths under the banner of the scriptural quote "Do unto others as you would have them do unto you." I thought of this when reading Bomar’s quote here – and thought of another scriptural quote, the “Great Commission” … "Go therefore and teach all nations".

While it seems a previous white pastor coaxed his congregation away from the way some folks celebrated a Latin Mass and chided them that they weren’t “black enough” - the idea being I guess that people could still “be themselves” and worship rather than imitating a norm from “another culture” - I liked the more unitive comments of parishioner Bomar a bit better. God is Our Father and while THAT remains the priority … even over the lesser considerations of cultural expressions etc, … we will tend to meet in Jesus as brothers and sisters more easily.

en.wikipedia.org/wiki/Chinese_Rites_controversy < What cultural things can be accomodated in Catholic Worship … and what cannot (as in possible heresies being welcomed in on an equal footing to Church teaching) has been debated for a long time.

Catholicism in China went through its controversies A Chinese Emperor, Kangxi, impressed with a Jesuit leaders’ help in other matters welcomed Christian missionaries into the country and protected their rights of worship against all possible opposition … at first. (1692 - Edict of Christian toleration).

Later missionaries took issue with the accommodation of Confucianism (seen by some as a religion vs. a philosopy) and “ancestor worship” (as going beyond mere honor?), as well as the use of Oriental style vestments, church architecture etc. etc. - as being dangerous to the point of " … is this still the faith being taught?" and appealed to Rome for rulings.

Rome rule yea on some things, nay on others, and when its prohibitions on certain aspects of Catholic worship that had been practiced previously in China came about (in 1721), the Kangxi Emperor disagreed with Clement’s decree and banned Christian missions in China.

Pope Pius XII in 1939 relaxed some of the former prohibitions and by 1943 the Chinese government had established relations with the Vatican and Pius named a native Chinese Catholic as Archbishop of Peking.

At any rate, our time here on Earth is short. The oneness that Christ prayed for for us all is probably best achieved … or approached … when we keep our believing eyes on Him more than we keep our skeptical eyes on our brothers and sisters who come from different places and peoples. :gopray2:

nice article, but I have to say…there are Masses like this in most Diocese…most big cities.
if someone has never been to a vibrant liturgy such as this, it’s something to experience.
Other cultures do it differently gang. They really do. Still within the parameters, but culturally diverse.
Peace.

Agreed. The focus appears to be more centered on the congregation and the music than on Christ Himself. The Mass is a beautiful re-presentation of the Sacrifice on Calvary. There is no need to “culturally enhance” it to bring in worshipers.

That being said, there’s nothing wrong with worship services like this apart from Mass. If people want to get together and sing songs and have a more vibrant service, that is all well and good…just not at the expense of the Holy Mass.

The catholic Mass is a sacrifice** [size=]not entertainment[/size]**. Sorry to be a party pooper but clapping after the song during Mass shouldn’t be allowed. Did those who witnessed Christ’s death start clapping?

Agreed. The focus appears to be more centered on the congregation and the music than on Christ Himself. The Mass is a beautiful re-presentation of the Sacrifice on Calvary. There is no need to “culturally enhance” it to bring in worshipers.

That being said, there’s nothing wrong with worship services like this apart from Mass. If people want to get together and sing songs and have a more vibrant service, that is all well and good…just not at the expense of the Holy Mass.

Exactly……Clapping for the music is recognizing human achievement which draws attention from the ends of the Mass, ACTS! I am shamed to think that Catholics could put more focus on that than the Eucharist and the actual offering of Christ to His Father!

The Church puts a high regard for music in the liturgy and there is nothing wrong with expressing music culturally as long as it is done with the proper intention and realizing its role which is to be done as an integral part of *solemn *liturgy.

I suspect an ulterior motive to this article - why is the emphasis on race?

Speaking of race, I’d like to share a story about a black priest who recently visited us. Our diocese brings African priests here to temporarily help fill the gap resulting from need and one in particular has deeply touched our hearts. The very first Mass I attended that he celebrated (it was during the week) when he elevated the Eucharist, I was overcome with gladness and joy. It was totally spontaneous and not being much of an emotional person, I was confused as to what was happening. After the Mass a friend who had been sitting a couple of pews ahead of me turned around and she had tears in her eyes. She exited the pew and grabbed my arm to go out to the narthex. In the narthex we saw another we knew who had been deeply touched as well. After a group hug I asked, “what in the world just happened in there? It is the same Mass, the same sacrifice, the same prayers…so WHAT?” One of them answered with the truth…“we recognized the presence of God in that priest.” Really…there was no other explanation. His homilies remain with us and we recall what he has said. Some have felt the desire to strive for more personal holiness after coming into contact with him. This is generally recognized as an attribute of a saint, or a saint in the making. He has shared that his music back home is very lively, but nonetheless the celebration is always focused upon adoration of the Lord. Now this is true worship and JOY!

Clapping in some cultures is akin to saying Amen. Clapping is not always about performance.
Not defending clapping in Mass, but you have to realize that other cultures have other expressions.

“This is a Catholic Mass,” said the Rev. James Curran, “but done unlike anything you’ve ever seen. There are times when I have to look down to see if my feet are still on the ground.”

Yes, but how are the confession lines?

system closed September 23, 2017, 1:27am #11
DISCLAIMER: The views and opinions expressed in these forums do not necessarily reflect those of Catholic Answers. For official apologetics resources please visit www.catholic.com.