Why is AOC flashing the WHITE POWER symbol?
Will she be censured, or is she untouchable?

New Jersey Sen. Cory Booker on Monday suspended his campaign for the Democratic presidential nomination after struggling since the start to break into the top tier and failing to make the cut for the upcoming debate.

At least there no white dudes left running. #diversity

Did anyone watch the debate, what was your take?

Democrats take a walk on the mild side

The race may be exciting but the Des Moines debate was painfully dull.

One aspect of this debate that does not appear to have been covered much elsewhere: the CNN bias against Sanders. Here, read and judge for yourself.

...even for the most hardened critics of the network, yesterday’s debate was breathtaking in its unrelentingly negative questions of Sanders followed up relative softballs to others...

Remember it’s been alleged that CNN is a mouthpiece for the DNC; they strongly backed Hillary in 2016. If the article is credible, it looks like CNN is again participating in the sandbagging of Sanders’ candidacy.

This isn’t going to go unnoticed given the controversy between Sanders and Warren and it may work to Sanders’ benefit as there is still a strong anti-war sentiment among Democrat voters as there is among Republican voters. That’s one of the big reasons Trump got elected, but Sanders could steal his thunder here.

Also this is reviving the question of why the DNC dislikes Sanders. IMO, it’s because Sanders is the only credible frontline anti-war candidate at a time when anti-war candidates will not be allowed to win the nomination. Only other anti-war candidate are Gabbard and to a lesser extent Yang, but they are rapidly becoming irrelevant absent a surprise push.

Also this is reviving the question of why the DNC dislikes Sanders. IMO, it’s because Sanders is the only credible frontline anti-war candidate at a time when anti-war candidates will not be allowed to win the nomination. Only other anti-war candidate are Gabbard and to a lesser extent Yang, but they are rapidly becoming irrelevant absent a surprise push.

I would say the DNC doesn’t like Sanders because of Wall Street and big donor interests.

Stanley Druckenmiller says stocks would fall 30% to 40% if Bernie Sanders is...

"The good news is we'd all be much more equal because everybody would be poorer, but the rich would have lost a lot more wealth," Druckenmiller says.

Though Warren comes under similar criticism, I think she would flip flop and not implement her plans to the degree she’s proposed, she’s speaking to get elected not out of true conviction (and they know it) 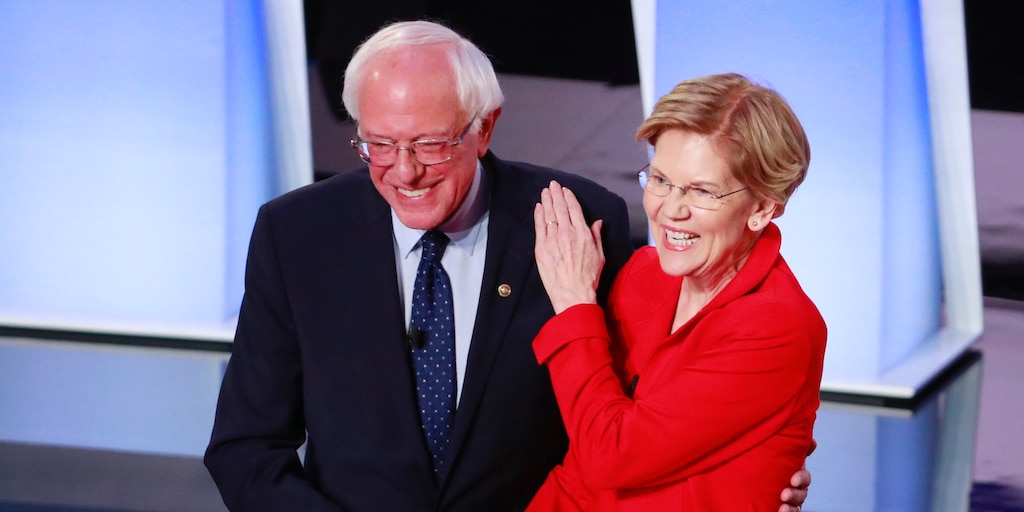 An election win for Sanders, Warren, or Buttigieg could tank the stock market...

The stock market could plunge by 30% to 50% if Bernie Sanders, Elizabeth Warren, or Pete Buttigieg are elected president next year, Virtus Capit...

Yes there is that aspect too. Bernie will mess with too many 1% rice bowls. Warren will too, but she’s not anti-war.

CNN did this with Hillary too. 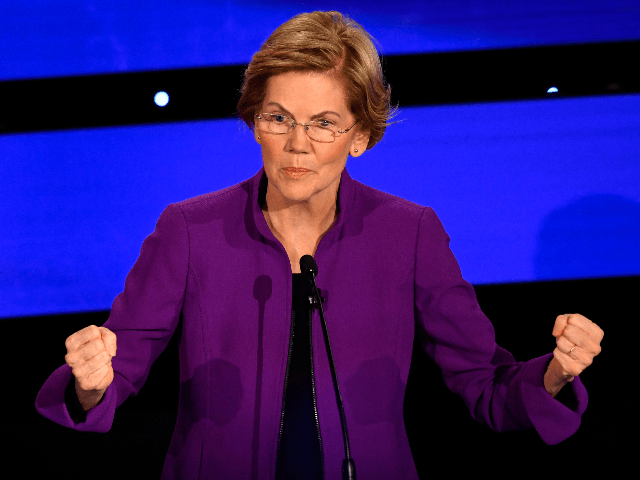 CNN appears to be taking the word of a Sen. Elizabeth Warren (D-MA), a candidate who has a history of fabricating key details of her life, and a point that boiled over after moderators of Tuesday’s debate demonstrated a clear bias against Sen. Bernie Sanders (I-VT).

The network came under fire Tuesday night after moderators demonstratively favored Warren over Sanders, repeatedly, during the Democrat debate in Iowa. It hit a boiling point after CNN’s Abby Phillip posed Sanders’ alleged comments, about a woman not being able to win the presidency, as fact.

CNN broke the story, which alleged that Sanders told Warren during a private meeting in 2018 that a woman could not win the presidency, a day ahead of the debate. He vehemently denied the allegation, calling it “ludicrous,” but Warren released a statement affirming the claim made in CNN’s report.

“Among the topics that came up was what would happen if Democrats nominated a female candidate. I thought a woman could win; he disagreed,” Warren said, reverting the story back to a political version of “he said, she said.”

CNN’s bias reached a tipping point when Phillip posed the report as fact, right after Sanders denied it.

“Warren, what did you think when Sanders said a woman couldn’t win the election?” Phillip asked Warren. . . . .

CNN appears to be taking the word of a candidate, Sen. Elizabeth Warren (D-MA), who has a history of fabricating key details of her life. 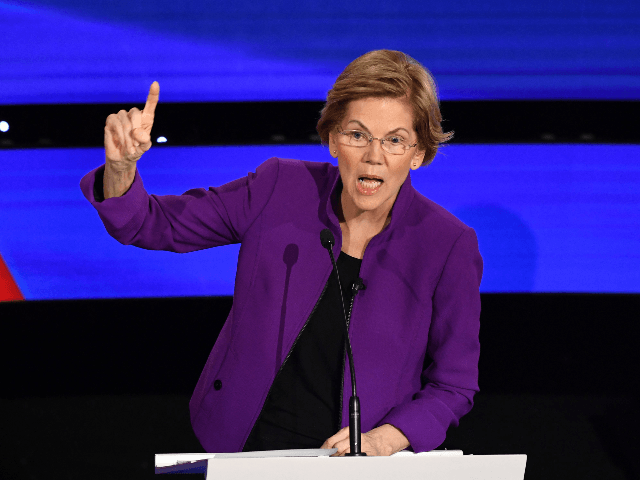 Critics cried foul following the conclusion of the debate, claiming that CNN clearly demonstrated a bias against Sanders. The issue boiled over after CNN moderator Abby Phillip asked Warren how she felt about Sanders alleged remark about a woman being unable to win the presidency — a remark he denied just seconds before:

Phillips: You’re saying that you never told Senator Warren that a woman couldn’t win the election?

Phillips: Warren, what did you think when Sanders said a woman couldn’t win the election?

Warren: I disagreed. Bernie is my friend, and I am not here to try to fight with Bernie.

“And I think the best way to talk about who can win is by looking at people’s winning record. So, can a woman beat Donald Trump?” Warren continued, seemingly attempting to garner feminist support. . . .

. . . Sanders supporters were not just upset with CNN and the Democratic National Committee (DNC) following the debate. They were also upset with Warren and expressed their sentiments on Twitter. However, the remarks also caused many Democrats to scramble, stepping forward to speak out against the #NeverWarren trend and contending that, if she is the candidate, they should all unite behind her. #CNNisTrash, #WarrenIsASnake, and #WomenforBernie also trended . . .

. . . Anyone posting #NeverWarren gets blocked immediately.

That kind of nonsense tells me that you’re really only concerned with your candidate winning—which is how we got Trump. We’ve seen this movie before. . . . John Pavlovitz January 15, 2020 . . .

Sen. Elizabeth Warren (D-MA) would not shake Sen. Bernie Sanders’s (I-VT) hand after accusing him of once asserting that a woman cannot win the presidency after Tuesday evening’s Democrat debate in Des Moines, Iowa.

Sanders is seen extending his hand to Warren, who instead moved her hand away and began talking to her White House rival in a tense manner. The pair exchange a few words before a perturbed-looking Sanders turned his back to Warren and walked away. Immediately after, Sanders is greeted by billionaire and climate change activist Tom Steyer and the two shake hands.

Sen. Elizabeth Warren (D-MA) would not shake Sen. Bernie Sanders's (I-VT) hand after accusing him of once telling her that a woman cannot win the presidency in 2020 during Tuesday evening's Democrat debate in Iowa.

The video can be seen on the Breitbart link.

Or this is the video too from Bloomberg’s network . . .

Listen: After Debate, Warren Accuses Sanders of Calling Her a Liar, Sanders Says She Called Him a Liar

Listen: After Debate, Warren Accuses Sanders of Calling Her a Liar, Sanders...

Now we have a he said, she said situation on our hands. Only one of them can be right. Says here Warren is the more likely liar given the ease with which she has lied multiple times before. I don’t like Sanders, but he has never not backed women’s rights. A record of doing so for decades now and he would throw that away in conversation with Warren? Really?

This thought keeps running through my head… Sanders is NOT a Democrat… Yes, they are letting him run on the ticket. Why? He’s NOT a Democrat! Am I right about this?

Gutfeld on the worst debate ever

Jan. 16, 2020 - 7:34 - Without original thinkers like Andrew Yang or Tulsi Gabbard, those on stage for the Democratic presidential debate seemed bored by their own words.

THE DEMOCRAT DEBATE CIRCUS HAS RETURNED 🤡

In hilarious self-own, Warren asks 'How could the American people want...

Of course, the reporters didn't ask any follow-up questions

In hilarious self-own, Warren asks ‘How could the American people want someone who lies to them?’

Of course, the reporters didn’t ask any follow-up questions

Another day in the Democratic Party sandbox:

"Tulsi Gabbard is running for President of the United States, a position Clinton has long coveted, but has not been able to attain."

I don’t expect this to go anywhere for a number of reasons I won’t go into here. But I just find it amusing as heck.

Angry Dad Confronts Warren On Student Loan Forgiveness: ‘Can I Have My Money...

A dad who paid for his daughter's education confronted Democratic Massachusetts Sen. Elizabeth Warren over student loan forgiveness: 'Can I have my money back?'

1 Like
DISCLAIMER: The views and opinions expressed in these forums do not necessarily reflect those of Catholic Answers. For official apologetics resources please visit www.catholic.com.
×