Don't you think that Adidas should apologize and stop producing this..?

BoF Exclusive | How Gosha Rubchinskiy and Adidas Are Refashioning Football 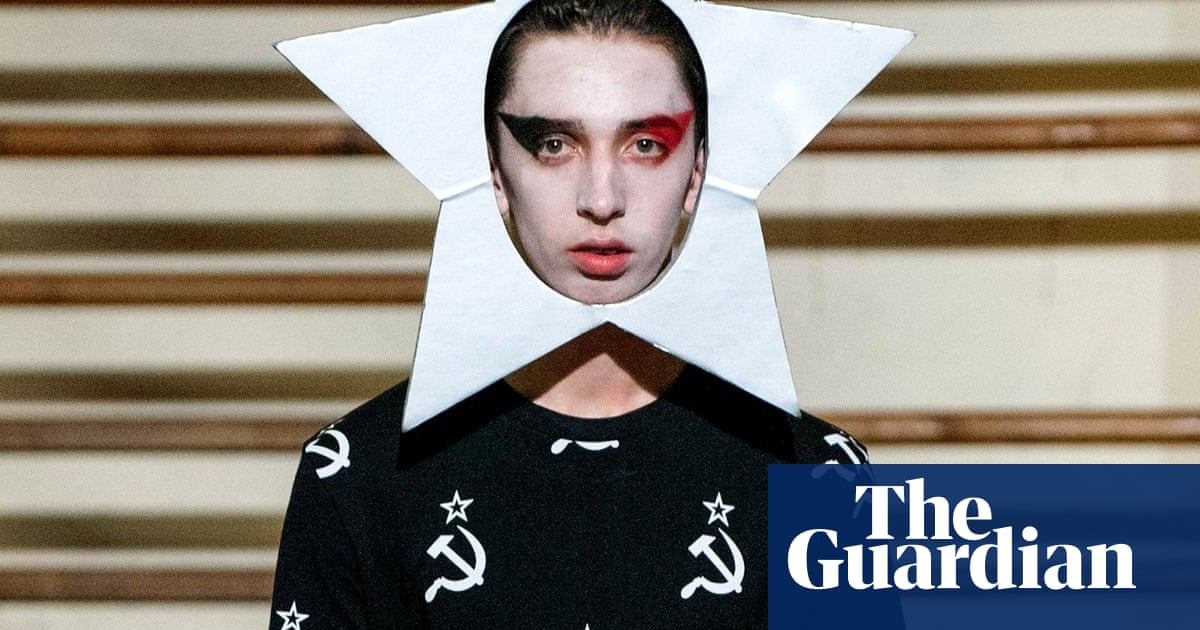 The man who made Russian fashion cool

Gosha Rubchinskiy grew up in post-Soviet 90s Russia fetishising the logos and brands of the west. Now, he’s hottest name in men’s fashion

Why? No one has to buy it if they don’t approve. Besides, this are old articles, I don’t even know if this is still a thing.

Is one better than the other?

Are those part of that line? I didn’t see any Nazi symbols in the posted articles.

In my opinion, it is foolish to be proud, to joke, to magnify and to be nostalgic about the inhuman ideology that has brought terrible tragedies to many peoples of the world.

It’s photoshopped. I’d be furious if I was the model in that pic.

Communist totalitarian symbols in one way or another are used to spread the totalitarian ideology.
The propagation of these characters is disrespectful to the hundreds of millions of victims of the Communist regime.

For Rubchinskiy, Kaliningrad is a return, not only to Russia, but to the approach he took with his very first show, a deeply political and DIY affair featuring a collection named “Evil Empire” (a term applied to the Soviet Union during the Cold War by US president Ronald Reagan), which contained Russian nationalist symbols like bears and Kalashnikovs. “When we started in 2008 with our first show, it was more like a performance than a fashion show. It was also about politics. With the Georgian conflict, many in the press were against Russia. It was my answer to all of it,” he explains. “I was like, ‘You say we’re evil? Ok, then, why not?’ We wanted to scare them, that’s why we used all the bears and guns.”

From the BoF article.

The fashion is meant to awaken people to the fact the Russians are not “all” the enemy. The designed played into the fact that with all the current conflict many people see Russians like this, so why not just go all out and do a show where they are all “bears and guns”.

This isn’t an endorsement, this is trying to tap into fears of the general public—fears the average current Russian has nothing to do with.

It is impossible to idealize and joke about the symbols that inspired and provoked the tragedies of mankind.
There are a nice proverbs regarding communism and it’s symbols:
“Sometimes, if you wear suits for too long, it changes your ideology.”
“Slowly, ideas lead to ideology, lead to policies that lead to actions.”
“Communism isn’t sleeping; it is, as always, plotting, scheming, working, fighting.”

He was creating a runway where people would have to talk about the topic. He did the exact opposite.

You have looked at it, and been incredibly affronted by it—which is legitimate. It is confronting. He didn’t do it, as far as I can see, to approve of the past and current Russian politics.

I think you are conflating the two issues.

I don’t mean the tailor’s initiatives I mean the symbolism and the brand that popularizing this symbolism. Soviet symbols in the clothing as innocent as the Nazi symbols.

Denunciations and calls for common sense have finally come to an end.
Sports goods manufacturer Adidas removed from sale a line of clothing with the symbols of the USSR, which caused an international scandal.

Adidas removes Soviet swag from its online store after upsetting Lithuania and...

The sportswear manufacturer Adidas has removed from its U.S. online store a dress bearing the USSR’s colors and emblem, following complaints from people and government officials in Lithuania and Ukraine.

Clearly whatever the designer thought he was doing, wasn’t working outside of his target market, which were Western Europeans / Anglo-Saxons.

For those who have experienced the regime to was more than a fashion statement.

If the fascist symbols are banned, then the Bolshevik and Soviet should be banned.

I mean fascist symbols aren’t just bad because Nazi Germany killed lots of people. They’re bad because of what they represent - White Supremacy and fascism. Modern neo-Nazis don’t just use those symbols because they support a historical nation-state, they use them because they represent a political movement. Adidas clearly aren’t communists, they’re just appropriating symbols from a historical state to make edgy clothing.

It’s always worth noting that we revile these symbols because of certain narratives about historical events that states wish to propagate. Imperialism has also been responsible for the deaths of millions, and yet I am allowed to wear a Union Jack on my clothes.

Yes, but Bolshevism and Soviet power are guilty of many inhuman crimes.
I consider unacceptable the glorification of communism and the glorification of Russia. Russia is the same, Russia as an Empire has not changed.
RUSSIA HAS THE WORLD RECORD OF GENOCIDE
List of evil genocide done by Russia to other nations that Russians / Russia never have admitted and / or apologized and / or taken any responsibility for…

(Some sources state that three million Circassians were deported and killed )

(Former Russian President Boris Yeltsin’s May 1994 statement admitted to the tsarist Russian forces was guilty of the genocide according to the official tsarist documents more than 400,000 Circassians were killed, 497,000 were deported

(Peter Holquist, concludes that decossackization did not constitute an “open-ended program” of genocide" Don province, from May 1918 to February 1919, the “All-Great Don Host” was estimated to have killed between 25,000 to 45,000 people )

Genocide and Massacres of Polish peoples 1937

(Estimates of the number of Polish citizens transferred to the Eastern European part of the USSR, the Urals, and Siberia range from 1.2 to 1.7 million)

Genocide known as the Great purge in Mongolia 1937

(Nikolai Yezhov, the head of the Russian Soviet secret police, NKVD. It has been estimated that buddhist lamas made up the majority of victims, with 18,000 being killed in the terror. were murdered by the Russian controlled Soviet government today you can see a monument dedicated to the victims of the repressions in Ulan Bator, Mongolia )