Brothers and sisters of the Eastern Rites & Churches, I’m looking for some reading material to balance and expand my understanding of and love for the theology and liturgy and life of Christ’s Church. I’m a Latin Catholic without the slightest impulse to “move,” but with a strong impulse to “grow.” Like most Latin Catholics I’m sure my ignorance of “the Eastern lung” (my own shorthand) is vast and perhaps shameful. In any case, what might you suggest for me to address that ignorance?

I think that Orthodoxy is not something which reading can help you understand. Better for you to go to Orthodox church for Divine Service. If you go to Divine Liturgy and follow prayers you will know more of Orthodoxy than reading. I think you will find beauty of Orthodox leads to truth of Orthodoxy. Like my brother’s son who is now studying at Sretenskiy seminaria in Moscow who will devote life to Christ in Holy Church. He finds many brought to Holy Orthodoxy first by beauty, then to truth! 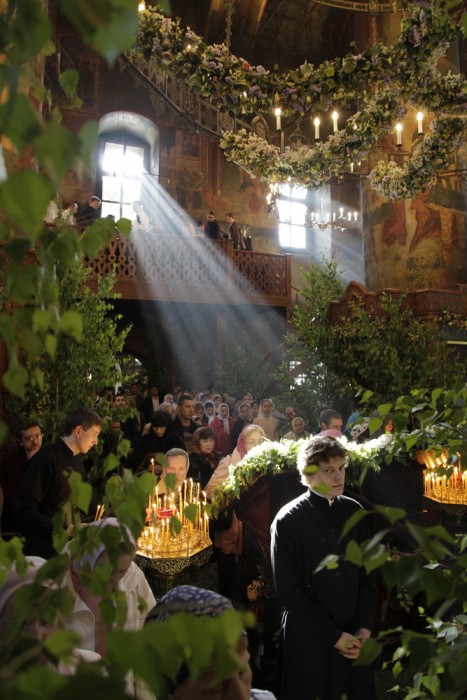 … what might you suggest for me to address that ignorance?

My brother Volodymyr is quite right, I agree with him fully. The faith is very experiential and through worship is the best introduction. This was one of the first things that jumped out at me when I visited my first Eastern Christian temple (it happened to be a Byzantine Catholic temple). The liturgy is pregnant with rich theology.

Then also, one worships with all of the senses: sight sound touch smell and taste … and with the whole body, there is movement and feeling with full bows and prostrations and crossings at every mention of the Holy Trinity, which is very often. The prayers and hymns are catechetical, not just feel good sounds with messages, one learns the theology by participation in the full cycle: daily, weekly, annually.

Bishops learn the faith at their grandmother’s knee first, the seminary studies are just commentary. It is in this way that the faith is transmitted through the ages, and all the people are custodians of the faith and feel jointly responsible for it.

The discipline of liturgical theology is very big in the east. I found this difficult to understand at first, but the reality is one can write volumes just on the study of what we have been praying all these years, and theologians do just that. To settle an argument about what Orthodox believe, one can just site the divine liturgy and the hours. In fact, I can remember reading Papal encyclicals referencing parts the eastern liturgy, when they have needed to teach on an ancient understanding.

Father Lev Gillett, a man who spent much of his life straddling the east and the west and working toward reconciliation, said this about the church in his own wry way:
O strange Orthodox Church, so poor and weak, with neither the organization nor the culture of the West, staying afloat as if by a miracle in the face of so many trials, tribulations and struggles; a Church of contrasts, both so traditional and so free, so archaic and so alive, so ritualist and so personally involved, a Church where the priceless pearl of the Gospel is assiduously preserved, sometimes under a layer of dust; a Church which in shadows and silence maintains above all the eternal values of purity, poverty, asceticism, humility and forgiveness; a Church which has often not known how to act, but which can sing of the joy of Pascha like no other.

In which case I would suggest reading Saint John of Damascus.

Reading can be helpful, but first you have to understand the Eastern Mindset, which is considerably different from the West. I hear of so many Catholics here who just read but they impose their western preconceptions on what they’ve read and they come away with much less than they would otherwise (though they still seem to get something out of it).

Attend the services, not just the Divine Liturgy, but Vespers and any other assorted services you come across (Lent is an excellent time for this sort of thing), talk to priests, until you start to understand the mindset. Then do your reading, you’ll get much more out of it.

What Hesychios says about participation with your whole body is very true. Due to circumstances outside my control I’ve had limited mobility for the past few weeks and had to sit through most of a couple of Divine Liturgies. It is much more difficult to get anything out of it when so restricted.