Number 11 from Pictures of the Day, Voice of America:

I have seen these kinds of pictures before but I am not very aware of much more about them.

That is the norm here in Spain during Semana Santa (Holy Week); we have processions where members of diverse confraternities dress up similarly and carry large floats. 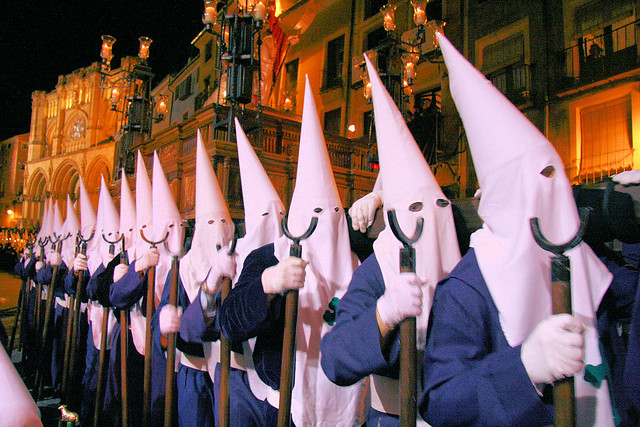 Coming to Spain during Easter just for these processions is worth it, imho

Now, before anyone says it, yes, I know, they bear an unfortunate resemblance to certain hate groups. But this has been a thing in Spain for way longer than that group has even existed.

Such would be an ancient brotherhood (confraternity) in relation to the Order of the Most Holy Trinity and of the Captives.

They have been involved over the centuries in the work of ransoming Christian Captives from the Muslims…gathering alms for such and praying etc.

The clothing there would worn during processions not in life…

system closed September 22, 2017, 12:17am #4
DISCLAIMER: The views and opinions expressed in these forums do not necessarily reflect those of Catholic Answers. For official apologetics resources please visit www.catholic.com.