I found over the years trying to piece together the spider web claiming one group or another is responsible for the problems of the world just really doesn’t work rather it’s several different groups connecting to one another with a common interest.

This is true because many occult organizations overlap at higher levels. The rank and file occultists have no understanding of this when they swear allegiance in these hierarchical organizations.

The Nazis by and large suppressed Freemasonry in Germany…but they accepted the Prussian Branch of Freemasonry (?)

It’s also sort of ironic that the Soviet Union were actually more evil than the Nazis.

The Soviet Union killed more people than the Nazis ever did.

The Nazis were Socialists and while they were bad and killed a lot of people they still didn’t kill as many people as the Communists.

I don’t think you can rate one group of mass murders as better or worse than another group of mass murders based on comparing the large numbers of innocent victims slaughtered. Before Stalin became a Communist, he was already a criminal, doing jail time. As a Communist, he started out as Lenin’s extortionist, raising money for the Party. Based on his criminal experience in jail, he selected his criminal cronies, and criminalized the police. Being a criminal, Stalin, knew the ‘virtue’ of hiding his crimes against humanity. Stalin was not a mystical figure.

Hitler was a mystical figure. Many German occult organizations recognized his mediumistic abilities to channel (probably the spirit of Satan) into speech, writing, and actions. In a possessed rant, he would lose up to 2 pounds, dancing like puppet on a string, with rolling eyes, shaking limbs, and frothing mouth. He often appeared surprised at the words coming from his own mouth. This Satanic energy of seduction and hate was transmitted to German audiences, and they resonated to it. Unlike Stalin, Hitler and the Nazis photographed and documented their crimes meticulously. Pretty stupid!

We know that during the end of times there will be a mass conversion of Jews.

From The Reign of Antichrist, by Father R. Gerald Culleton; page 11

NOTE: To “fight against Antichrist” places Elias and Enoch in the Tribulation period.

IV. The Conversion Of The Jews - This conversion will be made chiefly by the preaching of Enoch. St. Paul says “Blindness in part has happened in Israel until the fullness of the Gentiles should come in. And so, all Israel should be saved as it is written, He shall come out of Sion and deliver, and shall turn away ungodliness from Jacob.” This is the origin of the Christian persuasion of the conversion of Israel at the end of the world.
"

The truth is at the center of the spider web is not one group or another it’s not the Jews and it’s not heretic luciferian Catholics.

At the center of a spider web of the Inferno of lies sits Lucifer the first rebel against God.

I call this “The Satanic Conspiracy,” and it is a real one!

The Nazis were Socialists and while they were bad and killed a lot of people they still didn’t kill as many people as the Communists.

What do y’all think about the warning? Some “mystics” are saying it’ll be around Oct-November, during the month of the rosary?

Interesting that this October is going to have 2 full moons huh?

I have seen this video, someone shared it on messenger with me. I had never heard of this Pastor before. He seems legit and what he says seems certainly plausible.
Is anyone familiar with Michel Rodrigue?

What do y’all think about the warning? Some “mystics” are saying it’ll be around Oct-November, during the month of the rosary?

I wish it would come, already! I’ve been waiting for over 10 years!

In truth, I think it would be good to come in October, for a number of reasons. The trial of Hillary Clinton for keeping her own email server and storing classified documents on it will begin that month; it’s one month before the US Presidential elections, among other things. If we’re picking dates, I’m laying odds on Oct. 9 or Oct. 11.

The 9th is the last day of Sukkot, the Jewish Feast of Tents, or more precisely, Tabernacles. In Hebrew, the scripture reads, "The Word became flesh and tabernacled among us.

The 11th, which may be a better date, is the Jewish feast of Simchat Torah, or Joy of the Torah. It celebrates G_D giving the Torah to Moses, i.e., Moses received the Word of G_D. Jesus is the Word made flesh.

I just thought it was weird that this October of all months has two full moons. One on the 1st and one on the 31st. Mary is the Mother of the rosary, and also represented by the moon. Just seems to be a big coincidence if not for the real thing. Especially with everything happening. If it gets worse in the next three months definitely a contender for the time of the warning IMO.

I’m not sure whether or not this video has been already posted here. If not here is Mark mallett and Daniel O’Connor discussing 'The Eye of the Storm ’ the Seventh Seal

I missed the first couple but they are super helpful and calming in this crazy.

Referring back to Shoebat, in that same section he points out that the Greek doesn’t specifically say “a mark on the right hand”; rather, it’s something on the right side. When you look at the pictures of various Islamic terrorist groups, you’ll see the majority of them have head coverings that have the bism’allah on it AND/OR are wearing armbands, again with the bism’allah. The bism’allah (In the Name of Allah) is the beginning of a prayer that can only be described as a rejection of Christianity. Since a Christian cannot wear or proclaim the bism’allah without becoming apostate, wearing or not wearing an armband or headband with the prayer on it then becomes an immutable sign of membership. And laws can be passed to prevent selling food or anything to anyone not displaying the bism’allah. It’s rather like what has happened during previous persecutions, where Christian symbols (crucifixes, pictures of Mary, etc.) were laid on the ground. If you refused to step on the images that marked you as a Christian and you were executed.

John of the Apocalypse was a Jew from Israel and probably wrote the original copy of Revelation in Aramaic, which uses the Hebrew alphabet. What was translated into Greek was “I am the Alpha and the Omega” in Aramaic/Hebrew is “I am the Aleph and the Tav”

I wish it would come, already! I’ve been waiting for over 10 years!

I’m about half-way through the book “The Warning” by Christine Watkins. All joking aside, I am not looking forward to what G_D will show me when my Warning arrives.

Our maybe it will be the trial of Donald Trump for the murder of Qassem Soleimani.

I have never been a fan of Protestants who draw graphs (with exact dates!) to describe the events of the end of the world. But finally - by accident - I came across a Catholic podcast on Queen of Peace Media channel on youtube. And so, this Catholic podcast and their timeline seems to be finally substantive - since it is supported by Revelation and visions of the Saints.

The podcast is pretty lit, not gonna lie, I also love the series that dr. Taylor Marshall did on the end times. Those are good, holy, well-grounded reflections.

I also noticed that in the current blizzard of news, confusion and the whole modern-day turmoil, it is best to look for silence, for silent contact with God in soul, also to listen psalms and hymns (also singing if one can).

You know what is comforting too? If someone is discouraged by the current events, remember one sentence that easily will lift your spirit, a promise that Our Mother made to the world on July 13, 1917 when she said:

"In the end my Immaculate Heart will triumph"

Just as in Noah’s days, people will not see the disaster coming and will go on living as always until it strikes. It’s later, much later, than we think and the “signs” have not been so obvious.

Wow!! I posted a couple months ago about my friend who is making the purple scapular of Benediction if anyone was trying to find them. (VERY hard to find with Covid) and I went back to the page I started looking for them on before she started making them and look:

I ordered 8 from her and can upload some pics of them but they are very good quality. Here’s the website, too! 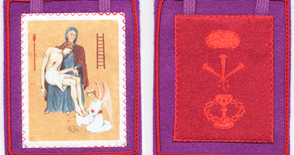 The PURPLE SCAPULAR of Benediction and Protection

The Purple Scapular of Benediction and Protection shown to Marie-Julie Jahenny: APPROVED MYSTIC since 1875

This is beyond awesome @Daisy! Thanks for showing us this wholesome creation of yours (I will be praying that God may help you with your work, because it’s so fantastic!)

Thank you, Erundil! I erased the images because I became shy.

I was just listening to this Jesse Romero video on George Soros. I had no idea Soros hated the family unit so much.

And I agree. Over the summer, two divorces have begun in my family. Another is on the brink. All of the aunties are at hateful odds with each other. Etc etc. On the other hand, my immediate family has only grown stronger because of the isolation.

In 1981 Sr. Lucia wrote in a letter to Cardinal Carlo Caffara a dire warning he revealed in 2008 and which we see rapidly unfolding in the world: “The final battle between the Lord and the kingdom of Satan will be about Marriage and the Family. Don’t be afraid…because whoever works for the sanctity of Marriage and the Family will always be fought against and opposed in every way, because this is the decisive issue.” She ended saying, “nevertheless, Our Lady has already crushed his head.”

@Erundil, as far as your timeline chart, I disagree somewhat and believe the chastisement is happening worldwide right now, and antichrist is already here. The Jews wrongly thought Christ would be an earthly king, and we think antichrist is going to be a decorated war general. But it’s a spiritual battle…

Something to think about…

When a Nation Becomes Possessed

The above image is a picture one of my CSU students took of the skulls that were hacked apart in the Rwandan genocide of 1994. We arrived there for a service project 20 years to the month following the genocide that took a million lives, most dying...

Pope praying for Nicaraguans after destruction of Managua crucifix - Vatican...

Pope Francis expresses his closeness to Catholics in Nicaragua, following an arson attack that destroyed a crucifix in Managua’s cathedral.

The Metropolitan Cathedral of Nicaragua has been bombed by an anonymous attacker.

The anticlericanism doesn’t surprise, after all, Nicaragua has been struggling with Sandinism (an anti-Catholic socialist movement) for decades, but the attacks to churches seem to be intensifying in the last few weeks, according to news sources.

but the attacks to churches seem to be intensifying in the last few weeks, according to news sources.

I frequently watch the “Jason A” channel on YouTube. He just published a story about the explosion in Lebanon. A viewer named Amy just posted this commentary:

Labor has started!
Jeremiah 22:23
You who dwell on Lebanon,
who nest in the cedars,
How you shall groan when pains come upon you,
like the pangs of a woman in childbirth!

3 Likes
DISCLAIMER: The views and opinions expressed in these forums do not necessarily reflect those of Catholic Answers. For official apologetics resources please visit www.catholic.com.