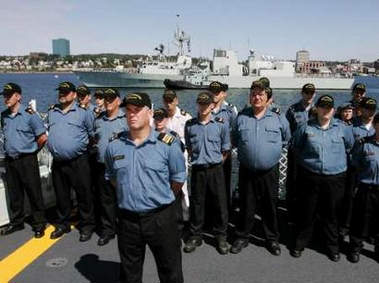 This is a photo of the sailors we sent down to the Gulf Coast after Katrina. The journalist on this story said, "“Are they taking a BowFlex?” I luv em anyway. :o

Until now, those who failed didn’t have to worry much. It had no impact on their careers. But CBC News has obtained an internal directive from Hillier that says a soldier’s career will now come to a halt until the fitness test is passed. No promotion, no pay raises and even the possibility of dismissal from the forces.
“This is leadership business, and I expect the support of leaders at all levels to ensure the CF [Canadian Forces] is fit to fight,” wrote Hillier. The intention isn’t to punish those who fail the test. Those who fail will be assigned to fitness classes… The military plans to have the physical fitness of all 60,000 members tested by this spring.

Here’s the buzz from the army.

system closed September 23, 2017, 11:02am #2
DISCLAIMER: The views and opinions expressed in these forums do not necessarily reflect those of Catholic Answers. For official apologetics resources please visit www.catholic.com.