Got seeds in the mail you didn’t ask for? Don’t plant them; report them

Got seeds you didn’t ask for? Don’t plant them; report them.

The Virginia Department of Agriculture and Consumer Services (VDACS) has issued a warning about seeds that could be dangerous to the environment.

Got seeds in the mail you didn’t ask for? Don’t plant them; report them.

RICHMOND, Va. (WDBJ) – The Virginia Department of Agriculture and Consumer Services (VDACS) has issued a warning about seeds that could be dangerous to the environment.

VDACS said some Virginia residents have received packages they didn’t order, containing seeds that appear to have originated from China. It’s not clear what types of seeds are in the packages, but they could be invasive plant species, according to VDACS. The packages were sent by mail and may have Chinese writing on them.

According to news sources, residents in Washington and Utah have also reported receiving seeds in the mail sent from China.

They really are saying, do not plant these

Somebody here in Louisiana got some and they reported it to the authorities and they are being tested.

Do you know who is sending them?

Somewhere from China is all they can tell from the addresses on the packages. People are not ordering or asking for these seeds. This seems very scary and cause for great concern. 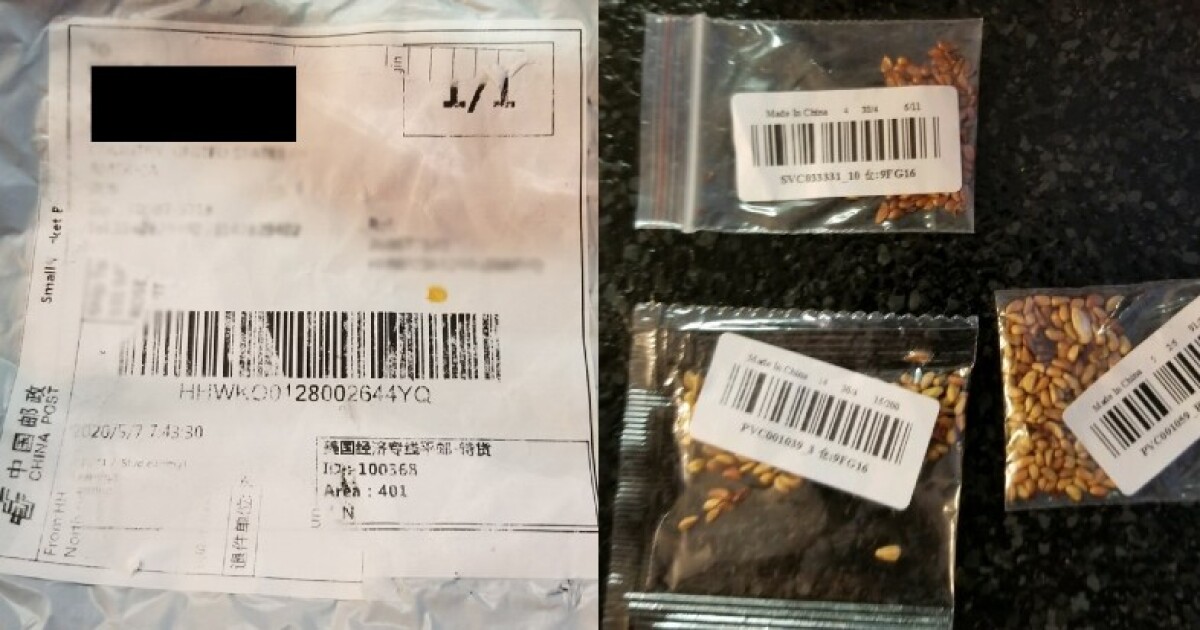 Louisiana Department of Agriculture and Forestry looking into 'mystery'...

The Louisiana Department of Agriculture and Forestry (LDAF) says they were notified that a resident in St. Rose, La. received an unsolicited package of seeds originating from China.

Is China conducting some sort of biowarfare?

Wouldn’t be surprised. It’s suspected that some invasive insects have been sent over here on purpose.

While the warning makes sense, the fact that someone, somewhere was likely considering planting them is sad. Who thinks it is a good idea to plant unmarked, non-requested seeds from China?

It is curious, isn’t it? Does it have any pictures of what they are supposed to be? Like flowers or something? What would be the purpose…most homeowners, even if they plant them, wouldn’t particularly threaten agriculture. Are they being sent to farmers? That would be more concerning!

MATTHEW 13:24-30 24 Another parable he put before them, saying, “The kingdom of heaven may be compared to a man who sowed good seed in his field; 25 but while men were sleeping, his enemy came and sowed weeds among the wheat, and went away. 26 So when the plants came up and bore grain, then the weeds appeared also. 27 And the servants
of the householder came and said to him, ‘Sir, did you not sow good seed in your field? How then has it weeds?’ 28 He said to them, ‘An enemy has done this.’ The servants said to him, ‘Then do you want us to go and gather them?’ 29 But he said, ‘No; lest in gathering the weeds you root up the wheat along with them. 30 Let both grow together until the harvest; and at harvest time I will tell the reapers, Gather the weeds first and bind them in bundles to be burned, but gather the wheat into my barn.’”

Bold mine. (I do not mean to imply the Chinese government did this. “An enemy” COULD be attempting to “frame” the Chinese with this writing. I don’t know who would do such a thing.)

I will just leave it as the text has it.

Any invasive species is problematic and yes - homeowners planting them is a hazard adn a threat to agriculture.

Most problematic INVASIVE species we have were innocently planted by individuals - not mass planted by farmers … and they cause millions and millions of dollars of harm and destruction every year.

Do not plant any seeds you receive that you do not know the origin of or even what type of plant it is … to do so is just crazy, dangerous and irresponsible.