. . . congratulations to the Oklahoma City Thunder for making it to the NBA Championship finals.

. . . congratulations to the Oklahoma City Thunder for making it to the NBA Championship finals.

No kidding. That collapse by the Spurs will go down as one of the biggest in sports.

I love the Thunders.Hope they capture the champioship title!

Old Sonics fan I take it?

But yeah I still agree lol

I don’t follow sports, so was surprised to read that Oklahoma City even had an NBA team.

For those who are as clueless as myself, the OKC team used to be the Seattle Supersonics, but relocated in 2008.

The Supersonics were commonly known as the Sonics, which was the name emblazoned on their uniforms.

As for the championship finals, best of luck to the Thunder and to the Miami Heat (their opponent.)

Game 1 about to begin

I hope they beat the heat. KD is a very humble young kid, of course I couldn’t say the same about Russell Westbrook.
Wade acts like a spoiled baby, at least for the last 3 or 4 years he has. Only heat player I actually like would have to be Udonis Haslem.

Cheering for my beloved Heat!

Found this picture of Archbishop Thomas Wenski of Miami with the Archbishop of Oklahoma on the Archdiocese of Miami Facebook page. They apparently have a friendly wager going on. 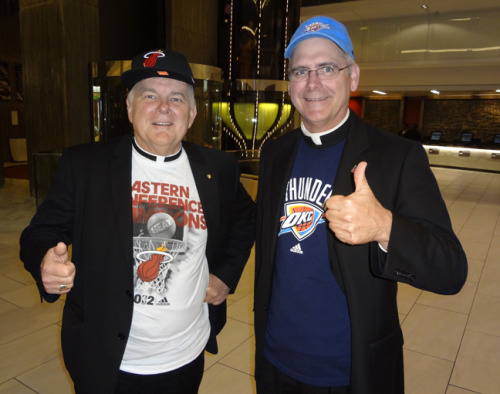 They’re gettin’ it done and makin’ it look easy.

When Miami beat the Celtics in game 7 ,the players from both teams shook hands and embraced after the series ended,but Garnett and Rondo left the arena before the end and didnt embrace the Heat players,why did they do this? why didnt they stay till the end to talk to the heat players??

are they too good or too proud to do that?

Very glad the Heat defeated the Thunder. Clay Bennett should never get to celebrate a title after what he did to Seattle.

system closed September 23, 2017, 6:55am #16
DISCLAIMER: The views and opinions expressed in these forums do not necessarily reflect those of Catholic Answers. For official apologetics resources please visit www.catholic.com.