Is oil REALLY a limited commodity?

What do CAF members have to say about the oil situation?

Don’t know if it has. I know that shortage of living space and an inability to match agricultural output with the increase in the population has been used to justify this, but petroleum? Energy-wise we can always switch to renewable sources.

The production of oil is limited. As far as we know there’s a limited quantity of oil but our ability to extract it it’s limited as the easy to get oil is mostly used up. At some point 50-100 years from now a few placed will run out of easily accessible oil.

There will still be oil in the ground, but the cost and dangers in getting it might not be viable.

Can you connect this statement with the question in the OP please?

It makes the argument for alternatives to oil.

In the 1970s, it was forecast that we would run out of oil in the 1990s. This was used to pressure environmental things more than population, as I recall.

ZPG was driven by overpopulation and running out of resources in general, especially food. This idea was made very widespread and popularly accepted by the 1968 book the Population Bomb. The same year Humanae Vitae came out, yes.

Does your logic here make the finite supply of oil suddenly poof into an infinite supply?

There have been several published reports saying oil was about to run out. Nothing has changed. Total global oil reserves are unknown. In the past, it was not possible to drill in the North Sea - they figured it out.

While we haven’t completely nailed down on how complex hydrocarbons like petroleum oil are formed, there’s enough information to suggest that the breakdown and metamorphosis of organic materials into complex hydrocarbons and oil takes a good deal of time, on the orders of millions of years. It also requires certain kinds of geological features, at least to accumulate oil in reservoirs that we can access.

So basically we have to ask; if oil takes millions of years to form, there must be some tipping point where extraction overtakes the ability of natural processes to replace the oil. I would suspect that happened very early on in the extraction of oil, it’s just that there are vast reserves of the stuff.

The issue right now is trying to peg down just what the proven oil reserves are. That’s a tricky business from a geologist’s point of view, and gets more muddled because there is a geopolitical element to published reserves. There have been allegations over the years that countries like Saudi Arabia have overstated proven reserves.

But one way or the other, we’ll run out of extractable oil. That will happen when the cost of extracting the oil becomes higher than any value we can get out of oil. That’s a little different than the “peak oil” theory, which largely fixates on emptying proven reserves, and takes in to account other forms of energy like renewables and nuclear power coming on line. As other competing methods of producing energy drop in price, they make oil less valuable. The big push right now is energy density, where hydrocarbons are still king (per gram oil holds far more energy than most other energy storage mediums, except hydrogen, but that’s very tricky stuff to safely store), but that probably isn’t always going to be the case.

The post-oil age won’t come, I believe, when we stop being able to pump oil out of the ground, but when it just ceases to make any economic sense to do so.

You don’t have to go back to the 70s or even 90s, the dumbest economic prediction of the last 50 years was peak.oil, which was still being hyped 12 years ago. If history is any guide, we will move on past oil before we actually run out.

Didn’t we kinda hit peak oil a few years ago? Just that it wasn’t as drastic as predicted.

So the question is answered.

What does that have to do with the question of whether it’s a limited commodity? It either is or it isn’t.

Of course it’s a limited quantity.
Unfortunately, even the possibility of deprivation brings the worst out in people. The threat of deprivation or shortage is used to scare people.

The post-oil age won’t come, I believe, when we stop being able to pump oil out of the ground, but when it just ceases to make any economic sense to do so.

We never hit a “peak whale oil” or “peak lumber for heat” or whatever other energy source we’ve moved past. We just came up with something much better and more efficient.

That’s why nuclear power is so important and needs to be pushed, nuclear is the safest and cleanest energy to date and would go a long way to reducing emissions and lessening our reliance on oil and other fossil fuels.

Nuclear power is obscenely expensive, and has always existed through what amounts to taxpayer subsidization. There are technologies like thorium fuel cycle reactors that may make this advantageous, but at the moment nuclear power is just about the most expensive power out there. The advance in renewables is already showing signs of disruption of energy markets, and as storage density of batteries increases, it’s just as likely that renewables will become just as advantageous as nuclear. One way or the other, I expect we’ll reach a tipping point for oil probably mid-century.

I saw an article, 5 years ago, about some scientists who used computers to identify bacteria in cow’s stomachs that can make oil out of bio-mass. They said they could cultivate the bacteria and use it to provide renewable oil and gas for machinery like automobiles. It is a source that would produce 0% carbon emissions. I can’t find the article but here is another that is similar.

Anaerobic digestion techniques are evolving all the time. And they’re providing new incomes for our farming community.

One of the Bulb generators is Little Pengethley Farm , near Ross-on-Wye. Despite its small size, the farm manages to turn around 3,000 tonnes of poultry litter, 9,000 tonnes of sugar beet and maize, and 1,000 tonnes of vegetable waste into renewable electricity each year. Enough to keep the TVs and kettles on in 500 homes for a year and prevent about 650 tonnes of carbon being released into the atmosphere. Small farm, big impact. 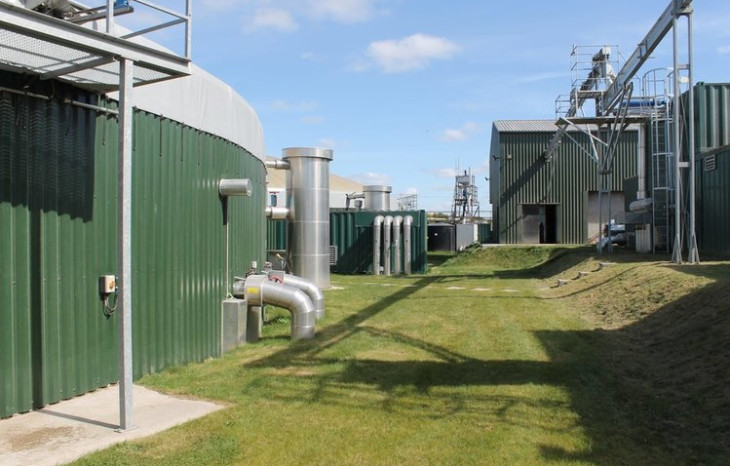 Another is Icknield Farm , where Oxfordshire landowners have transformed 1.8 hectares of farmland into a sophisticated gas-to-grid anaerobic digestion plant. It turns local maize and, erm, wet pig slurry into biomethane gas, which is then injected directly into the gas grid (minus the smell).

Despite all that, digesters are odourless and fit well in the layout of farming businesses.

Anaerobic digestion is getting smarter and the range of waste products we can use is expanding. It promises to be one of the clever ways we can continue to wean ourselves off non-renewable gas and electricity.

Gas in particular has a long way to go. 100% of Bulb’s electricity is renewable but the figure is 10% for the gas we supply. That’s still 100 times higher than the national average, and we’ll continue to source new green gas generators and get that figure up.

But for now, as a Bulb member you can say that at least some of the cups of tea you make are thanks to kettles boiled by a giant cow’s stomach.

Green energy can come from all sorts of weird and wonderful sources. We take a look at anaerobic digestion.