Israel Epstein, a journalist, author and propagandist for China whose passion for Communism was fueled in long interviews with Mao in the 1940’s and was not dimmed by imprisonment during the Cultural Revolution, died last Thursday at a hospital in Beijing. He was 90.

His death was announced by the official New China News Agency.

Mr. Epstein edited China Today, an English-language Chinese newsmagazine, translated the sayings and writings of Mao and Deng Xiaoping and advised the Chinese government on how to polish its overseas image. He became a Chinese citizen, joined the Communist Party and served on official government and party committees.

He and perhaps a dozen other aging foreign-born residents of Beijing were sometimes seen as the last true believers in a revolution that has sometimes seemed blurred by time’s passage and China’s embrace of free markets and consumerism.

In 1996, The Observer, the London newspaper, said, “Perhaps the most loyal Communists in the country today are foreigners, veteran fellow travelers from a vanished era of idealism.” …]

Mr. Epstein became acquainted with [the American journalist Edgar Snow] after his editor assigned him to review one of Mr. Snow’s books, and Mr. Snow showed him his classic “Red Star Over China” before it was published. Mr. Snow reciprocated by reading Mr. Epstein’s unpublished works.

**Veteran Journalist Remembered for His Unique Insight on China **

Tomorrow at the Babaoshan Revolutionary Cemetery in Beijing, hundreds, if not thousands, of journalists and people from all walks of life will pay their last respects to a special Chinese son, who was also a Jew and life-long journalist of more than 70 years. 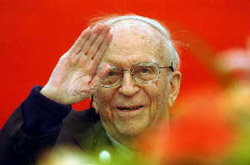 His colleagues, and those who have been touched by his series of books about China and about his life in the country, will undoubtedly be moved at the ceremony remembering the unique man who witnessed and documented all the dramatic events that shaped the modern and contemporary history of China.

“Eppy was an intellectual, a serious scholar with a wide range of interests,” said Sidney Shapiro, an American lawyer and writer who became a Chinese citizen in 1963, in an interview with China Daily.

“But what he accomplished in his long and fruitful life was predicated essentially on his heart. No one loved China more, no one was more devoted to the cause of the Chinese revolution,” Shapiro said.
…]
In 1939, he published his first book on China, “The People’s War,” expounding on the sacrifice, the suffering and the bravery of the Chinese in the face of Japanese aggression to a world still ignorant of it.

The book was published by Victor Gollancz in London, who had released Snow’s Red Star Over China.
…]
Epstein in those days of 1949, along with his wife, Elsie Fairfax Cholmeley, were in the United States themselves, **trying to “help Americans who opposed policies that flew in the face of unfolding reality,” **Epstein recalled in his My China Eye memoirs of a Jew and a Journalist, published by the Long River Press recently in San Francisco, the United States.
…]
china.org.cn/english/culture/130766.htm

At the end of China’s War of Resistance Against Japan, Epstein went to the USA with his second wife, Elsie Fairfax-Cholmeley, and worked for the Allied Labor News. He and other progressive thinkers united in urging the US government not to interfere in China’s internal affairs. He also made creative and pioneering efforts to strengthen friendship between the two peoples. One example is his help in translating the Yellow River Cantata into English and in getting it performed in the US.

Shortly after the founding of the People’s Republic of China in 1949, Epstein and his wife returned to China to help Soong Ching Ling set up China Reconstructs (now China Today) magazine in Beijing.

In 1957, with the approval of Premier Zhou Enlai, Epstein became a Chinese citizen. He joined the Communist Party of China in 1964. Since 1983, he has been a member of the Standing Committee of the National Committee of the Chinese People’s Political Consultative Conference.

A mass murderer, womaniser, liar and drug baron: a book by the bestselling author Jung Chang paints an horrific portrait of the erstwhile hero of the Chinese revolution

[left]On the cover of Mao: the Unknown Story is a tiny photograph of the Chairman. It is wrinkled and tattered. Until Mao Tse-tung’s death in 1976 anyone found with such a damaged photograph of the Great Helmsman, Teacher, and Red Red Sun in Our Hearts faced possible death and certain detention. In 1981, I met a woman in Nanjing who had found a bag full of Mao badges in the gutter - five years after his death - and had taken them to the nearest police station so she could not be blamed for possessing cast-off memorabilia of the Great Helmsman.

Indeed, the huge portrait of Mao with his immense mole still hangs, gazing into the distance, over the gate from Beijing’s Forbidden City into Tiananmen Square.

Can this be, still? Mao Tse-tung, who was responsible for the peacetime deaths of perhaps 70 million of his fellow Chinese?
…]
Many of these facts were really lies, usually originating in the titanic autobiographical lie that Mao fed the American journalist Edgar Snow in 1936 for his scoop, Red Star Over China. For decades, that series of lies underpinned all that Chinese and foreigners knew about Mao.[/left]

[left]…]
And of all the ordeals along the way, the worst was crossing the Dadu River, by way of a bridge over the deep gorge. The Nationalists on the other side had set the bridge alight, the story goes, and if the Reds had stalled there, exhausted and diminished as they were, the Long March would have probably ended in annihilation. But in the Mao legend, volunteer soldiers scrambled hand over hand along the suspension chains, through the flames, and although some fell to their deaths in the rapids below, the survivors got to the other side, drove off the enemy, the bridge was repaired, and the Reds got across and survived.

It didn’t happen. Not didn’t happen like that, but didn’t happen at all. “This is a complete invention,” write Chang and Halliday. “There was no battle at the Dadu Bridge.” There were no Nationalist soldiers there, “Chiang had left the passage open for the Reds,” there were no flames and “the Red army crossed the bridge without incurring a single death”.
…]
At one point the Nationalists left a truck at the side of the road loaded with food and detailed maps of the route ahead. Chang and Halliday maintain that Chiang spared the Reds partly because Stalin was holding his son hostage. Mao and the other leaders were carried in litters. A survivor told Chang and Halliday that the elite “lounged about in litters, like landlords”. Not a single high-ranking leader, no matter how ill or badly wounded, died along the March, although most of the soldiers perished. This was an early example, Chang and Halliday assert, of “the stony-hearted hierarchy and privilege under Mao’s dominion”.

The final nail in the coffin of the guerrilla years is that Mao rarely fought either the Nationalists or the Japanese during that period, and when his commanders did fight Chiang’s forces, just twice, Mao was furious.

For several years Mao oversaw the growing of opium poppies and the extremely lucrative sale of “the black product” in areas outside his control. He told Premier Chou En-lai that the business was worth six times the official Yanan budget. The Russians, whose sources on Mao’s career are Halliday’s most significant contribution to the biography, estimated sales then at $60m “or some $640m (£350m) today,” a humiliating admission for a patriotic movement that based its hatred of imperialism on the British export of opium into China in the 19th century.
…]

http://www.russians.org/slovo2.jpg
TeeVee’s Nelson M (l) with their man in Jo’berg
Joe Slovo ®
In South Africa there are now 50+ (official) murders every day. Between 1/3 and 1/2 of the population is HIV+.

why, I think I see a pattern.

http://www.russians.org/slovo2.jpg
TeeVee’s Nelson M (l) with their man in Jo’berg
Joe Slovo ®
In South Africa there are now 50+ (official) murders every day. Between 1/3 and 1/2 of the population is HIV+.

judicame…thanks for the information. Never heard of this guy before and I’m not unfamiliar with the history of China 1840 to present. Wonder if Epstein was involved in the heroin trade. Communism was cover for looting a country and then laundering the swag in the west as well as sex trafficking, financial fraud and drug dealing. In the early 1930s, Sasha Katzenberg’s Bronx opium refining plant blew up. Meyer Lansky sent him packing to China to teach them how to process opium into heroin. Armand Hammer sold millions, perhaps hundreds of millions, of art, stones, gold and silver plundered by Trotsky, Zinoviev and Kaganovich from Russian churches.

Orrin Judd on this article: “Anyone recall whether the Times obituary for George Lincoln Rockwell referred to him as the last survivor of an era of German idealism?”

maybe i am stupid, how can you be a jew and a communist at the same time? jewish is a religion, communism is (sort of) a religion.

The term “Judeo-Christian heritage” is so misleading. Jewish teachings are the kingdom will be of this earth. Works and obeying the strictures of the Law will result in perfection. Christianity teaches the Kingdom is not of this earth, works alone will not result in salvation.

Marxist is a perfect fit for Judaism. Not only is it utopian but it is a frontal assault on Christianity which, to Jews, is the most dangerous heresy ever. This is, of course, not a univeral view among Jews but it is a majority view.

“Western and Eastern Europe will become a federation of autonomous states having a Socialist and democratic regime. With the exception of the USSR as a federated Eurasian state, all other continents will become united in a world alliance, at whose disposal will be an international police force.”

" All armies will be abolished, and there will be no more wars. In Jerusalem, the United Nations (a truly United Nations) will build a shrine of the Prophets to serve the federated union of all continents; this will be the scene of the Supreme Court of Mankind, to settle all controversies among the federated continents, as prophesied by Isaiah."

[quote=jjwilkman]maybe i am stupid, how can you be a jew and a communist at the same time? jewish is a religion, communism is (sort of) a religion.
[/quote]

To be a Jew can be no more than ethnicism. There are many Jews around the world, including in Israel, who are totally non-religious, yet totally Jewish.

system closed September 23, 2017, 9:59am #9
DISCLAIMER: The views and opinions expressed in these forums do not necessarily reflect those of Catholic Answers. For official apologetics resources please visit www.catholic.com.