Jesus was a hippie argument 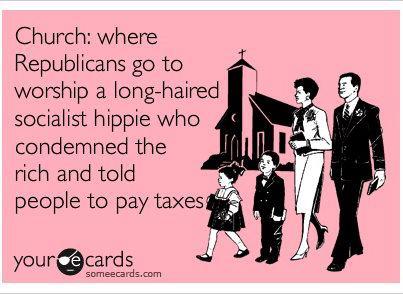 Personally I wouldn’t spend any effort to answer such sophomoric snark. Be assured that anybody who seriously offers this as a critique is not interested in a real discussion, but only in scoring empty points.

Who do you wish to disprove it to???

You can’t argue with a poster…:shrug:

And if you de argre with stupid, you just plain silly! :eek:

Saying that Jesus was a “long-haired socialist hippie” is blasphemy! If someone said that to me I’d want to slap him upside his empty head! But I’d probably just turn around and walk away.

Jesus was … unclassifiable. More of an iconoclast than anything, he even said he came to divide, not unite.

To claim he was a socialist hippie is beyond stupid. It’s asinine.

Jesus was a conservative, not a socialist; socialists promote revolution: “Do not think that I have come to abolish the law or the prophets. I have come not to abolish but to fulfill." (Matthew 5:17)

There are many people out there who have little to no faith, aren’t practicing Christians, and haven’t read much, if any, of the Bible. They grow up hearing other unbelievers’ fallacious characterizations of Christ as some kind of soft-spoken, nurturing, feel-good kind of motivational speaker, when He, while merciful to those with faith, was really demonstrating a kind of heavenly tough-love.

For heaven’s sake, he cursed a fig tree that wasn’t bearing fruit out of a season, and then went into the temple area and literally whipped the money changers and animal sellers until He had driven them out. He also commanded us to respect legal authority, not rebel against it. Not exactly the mark of a modern-day long-hair.

Hey, that site where you make your own cards is pretty fun… 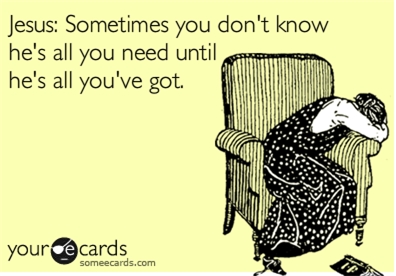 Pay all of them their dues, taxes to whom taxes are due, revenue to whom revenue is due, respect to whom respect is due, honor to whom honor is due. (Romans 13:7)

I took that verse as meaning take care of all your earthly business so that you can give all that you have to me.

Jesus did not condemn the rich.

When one examines the actual context of his statements about wealthy people, one sees that Jesus was actually preaching against materialism. Among other things, materialism draws ones focus away from spiritual matters. Obviously, having wealth can make people more vulnerable to the temptations of materialism than being poor.

Hey, that site where you make your own cards is pretty fun…

Im a Democrat and I go to church , and pray the rosary everyday

Since when do conservatives believe in tax evasion? Jesus says “pay your taxes” and any decent christian will do exactly that. If anything, socially conservative christians are even more likely to pay their taxes since they usually have greater respect for law-and-order.

Now, whether Christ would see taxation, itself, as being a “good thing”… well that is a completely different topic…

Pfft first I would resist my urge to smack them silly. Then I would ponder why do radical Muslims have it so easy…all they need to do is declare them an infidel and behead them…Then I would remember being a Christian ain’t easy but that’s the price we pay for Salvation, Then I would say this.

Okay let’s look at this statement.

“The social principles of Christianity preach cowardice, self -contempt, abasement, submissiveness and humbleness, in short all the qualities of the rabble, and the proletariat, which will not permit itself to be treated as rabble, needs its courage, its self-confidence, its pride and its sense of independence even more than its bread. The social principles of Christianity are sneaking and hypocritical, and the proletariat is revolutionary.”
~Karl Marx

So Jesus Christ was a subscriber to a philosophy that despises the very message Christ preached. So Jesus was a self-loathing hypocrite? Nope I think You and your stupid worthless drunk buddy Marx are. :mad:

Jesus was a Hippie

So Jesus Christ who was chaste, never indulged in drugs, and certainly was not a Socialist, and the Lord who will return to Earth with flame in His eyes, a sword from His mouth, and a gown dipped in blood…a Lord who spoke with a venom tongue when concerning hypocrites and Pharisees, whipped money-changers and was present during the entire annihilation of Sodom and Gomorrah.

That’s why His Father befriended and blessed rich guys like Abraham, Job, Issac, Jacob, Joseph, David, Solomon…you know…kings. I hardly think Jesus despised the rich, when a poor man has nothing to offer the poor.

Yeah render to Caesars what is his bit. But do the stupid pinko morons realize that Jesus was being cautious with His answer? Remember the Pharasies posed the question to Him in hopes of entrapping Him and being able to either

a) Force Jesus to protest Caesar’s tax, thus opening Jesus up to being arrested and charged.

b) Lose faith of His followers by stating Roman occupation was something He supported.

So Jesus as cunning and clever He was answered this.

Jesus is basically saying so many things it’s no surprise the Pharisees bewildered and confused just walked away…but the main message is. If God the Father is the Creator, then everything must belong to God. So if everything belongs to God, then what belongs to Caesar? The answer is nothing.

Tell those stupid pinko liberal commies to stuff that in their pipes and smoke it.

Jesus did preach a love-filled sharing frugality. Nowhere does Jesus say that wealth is anything but trouble.

Jesus tells us that we are to embrace poverty. Poverty is not being willing to give if called upon to do so, and it is not mere emotional detachment to created things. Neither is poverty destitution, although Jesus does call a select few to radical destitution.

Povety is actual, factual frugality, and that is what Jesus taught.

This isn’t a popular position to take, even among Catholics, but I would urge anyone who wants to understand Gospel poverty as it was really preached by Jesus to read “Happy Are You Poor” by Fr. Thomas Dubay.