Just what we need: sarcasm software

Just what we need: sarcasm software

Computers are getting better at understanding human languages, thanks partly to algorithms that can analyse sentences for positive or negative sentiments, says Ari Rappoport of the Hebrew University of Jerusalem, Israel. But picking up on sarcasm is still a problem. “In many cases, sarcasm is difficult even for people to recognise”, never mind computers, he says.

Rappoport and colleagues wrote a sentiment-analysing program. They then trained this software to recognise sarcasm by feeding it sentences that had been flagged up by human reviewers as likely to contain sarcasm.

The team used the trained program to analyse a selection of product reviews on Amazon.com and a random selection of posts on Twitter. Three human volunteers were asked to rate the same material for sarcastic content.
The algorithm agreed with the volunteers 77 per cent of the time for Amazon.com product reviews and 83 per cent of the time for the tweets.

Yeah, right. And I’ve got a bridge to sell you.
Sorry, I couldn’t resist.

I read that someone has also invented a character to insert into online conversations to indicate sarcasm – looks sort of like a deformed @.

Is the thing you are looking for, the Irony / Sarcasm mark.

I remember it because when I did my English Exams years ago I used it (like a horrible showoff) and I got marked down for it - turns out examiner didn’t know it hehe. 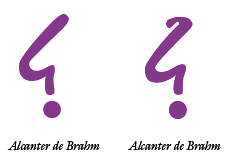 Looks like there’s nothing new – here’s an “irony mark” to indicate rhetorical questions invented on the 1580s according to Wikipedia.

Yeah, right. And I’ve got a bridge to sell you.
Sorry, I couldn’t resist.

I read that someone has also invented a character to insert into online conversations to indicate sarcasm – looks sort of like a deformed @.

Now you can really see how hard it is to detect sarcasm from the written word. This is part of what we call the “theory of mind”. Detecting sarcasm involves background knowledge of the subject matter, the speaker, and what the speaker knows about his audience, ie, you. For example, if you happen to know that Spirithound has a degree in linguistics, and is genuinely pleased for this advance, you know that my first sentence is not sarcastic. If you know something about computational linguistics parsing algorithms, you can indeed expect that 80% is a good score, particularly for a first stab at it.

I wonder, however, whether/how they distinguished between sarcasm and irony (and maybe even satire…). In my fuzzy-ish categorization of sarcasm and irony, the tokens so eloquently produced by The Twin above are sarcastic, but perhaps if he had gone on a bit longer about the bridge to sell (which is not to be sold, of course

Similarly, reviewers of certain products, most notably the “3 wolf shirt”, like to post reviews which contradict the expectations of the reader (sort of a rough definition of sarcasm and irony). They involve over-the-top praise, and unlikely romances between unlikely people, meeting in unlikely places. So the reader needs to know the unlikelihood of these things being true to evaluate them as sarcasm/irony. But there is nothing that I would call “sarcastic” about them, it seems more like irony.

Back to the article itself now

77-83% could be a good score, but only if we know the actual breakdown of the tokens (linguistic jargon for “the stuff being evaluated” ;)). How many are sarcastic, how many are genuine? If only 20% are sarcastic, then all anybody needs to do is tell the computer “evaluate all as genuine”, and waBAM! you’ve got an 80% success rate (overall/for the genuine tokens).

in the name of pushing forward, I wonder how this algorithm would do in an extremist forum…

system closed September 24, 2017, 11:50pm #6
DISCLAIMER: The views and opinions expressed in these forums do not necessarily reflect those of Catholic Answers. For official apologetics resources please visit www.catholic.com.