I’ve heard people say “You need to learn how to love yourself before you can love others”, or something along those lines. Isn’t pride sinful though? Can someone clarify this to me? I’ve struggled so much with self-esteem and constantly putting myself down. I guess those aren’t good. I think about the things I say to myself sometimes, I would never say them to another human being. I get so caught up in the past and guilt. I find it so hard todo, after everything I’ve done to me.

Loving yourself in the proper context is not pride. Christ tells us in this Sunday’s gospel that the second most important commandment is to “love your neighbor AS YOURSELF”. Implicit in this statement is that we are to first love ourselves. Otherwise there would be no point in the command to love others AS OURSELVES.

Remember, God made you and HE don’t make junk. You are valuable and precious in His eyes. Always.

I’ve recommended this book here before and I’m going to recommend it again. 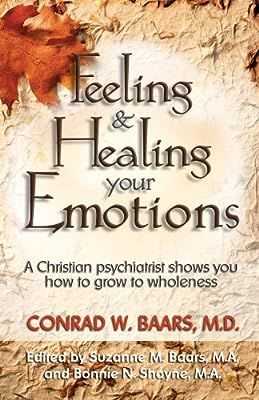 Feeling and healing Your Emotions offers guidelines for emotional and spiritual wholeness. In simple question–and–answer format, readers learn that all emotions are positive aspects of our nature and ...

Conrad Baars is one of the BEST Catholic psychologists who ever lived. He defended the Church without hesitation in a field that rejected Church teaching as a matter of course. His knowledge in the psychological realm only takes a back seat to his knowledge of the theological realm (especially Catholic theology) and for anyone who feels the way you do…caught up in past emotions and troubles…this book is a must-read.

Remember, God made you and HE don’t make junk. You are valuable and precious in His eyes. Always.

Exactly this. He knew you before you were born, and suffered and died for you in the person of Jesus.

To not love yourself is a sin to varying degrees. To hate yourself is to hate God’s creation (you). Its hard to love oneself in this world, that is why i think God asks us to not be of the world. Love yourself as God loves you. See yourself as God sees you, not as society sees you with their own invented values and self-worth…Your value is determined by God and God alone and no human has anything that God has not given.

Easier said then done. The problem is that if you don’t love yourself then any attempt to love others will be undermined by ones own self loathing. Faith is a daily struggle.

I ‘liked’ the responses to the question,
But that isn’t enough.
Your replies were a wonderful start to my day,
And I bookmarked your link Xanthippe.
I sometimes wonder why I come here,
But responses like these help to answer that doubt.

I struggle with the OP’s question/issue as well. Thank you to all who replied, you’ve help me too. Though, as some of said, knowing the truth and feeling it are two different things sometimes. I know I should love myself as God does, but how does He love me?? And then there’s the reasons for my low- self-esteem being so deep and complicated that loving myself at all seems impossible.

I struggle with the OP’s question/issue as well. Thank you to all who replied, you’ve help me too. Though, as some of said, knowing the truth and feeling it are two different things sometimes. I know I should love myself as God does, but how does He love me?? And then there’s the reasons for my low- self-esteem being so deep and complicated that loving myself at all seems impossible.

I feel like I should make this book my profile.

Mostly, because it seems so very relevant to many of these issues.

God wants you healed. There was an amazing Catholic Psychologist who did more for the field than any other modern psychologist. Not only that, he remained true to Catholic doctrine in the face of great trials. His name is Conrad Baars.

Buy this book, or find it at a library. Read it. Work on yourself with it. If you can, find a Catholic Therepist who understands Baars’ methods.

Feeling and healing Your Emotions offers guidelines for emotional and spiritual wholeness. In simple question–and–answer format, readers learn that all emotions are positive aspects of our nature and ...

Thank you. Though I’m not really able to do those things due to health issues and limited access to… everything. Believe me, I’ve tried looking for the right therapists/psychologists for years. I have one now, but he’s not Catholic. Maybe in a few years my circumstances will have changed enough, but for now, I have to settle for what I’ve got.

I have very low self worth to the point where sometimes I get very apathetic about existing in the future. Yeah its hard but I guess I just see it as if I let others just walk all over me, its like being humble and putting others first.

If you love someone don’t you want what’s best for them even though it may be detrimental to you?

Pride is a perversion of self-love which in itself is a good gift of God. So Aquinas called pride “inordinate self-love”. It’s to desire to be greater than we really are; it’s to be dissatisfied with our true selves. It can be said that Adam & Eve got this ball rolling in Eden, not satisfied at being a creature but wanting equality with their Creator instead.

So pride can affect us in two ways. When we feel that we “measure up” to the standard set by pride then we feel good about our selves-due to feelings of superiority. But when we feel that we don’t measure up then we feel inferior. Either position is wrong as they result from a standard imposed on us that we’re not meant to abide by. But we, ourselves, keep falling for the same temptations to live up to this standard that keeps enticing us and the rest of the world.

We must, however, love ourselves if we’re to be happy and healthy, if we’re to be who we were meant to be. And it’s very difficult to be kind and helpful to others if we’re continuously unhappy and dissatisfied with ourselves. But here, again, pride is the main culprit in this dissatisfaction; if we simply love ourselves as we should we won’t hate ourselves every time we fail in some way; we’ll cut ourselves more slack for being the limited, imperfect creatures of a Creator who alone is perfect. Or, OTOH, we won’t become the cold, miserable tyrants over others that we become when we feel the rush of superiority that pride offers when we think we have measured up.

And where we fail in valid ways, where dissatisfaction might truly be called for, when we sin IOW, then we can know that this Creator forgives us and wants to heal and place us back in that state of love for God, self, and others. That humble state that opposes pride by its nature.

I hate that saying a lot because I can easily love others without liking myself. In fact, people with their own issues tend to be a lot more empathetic and loving towards others from my experience.

I think what they mean is that you have to have self-respect first to love/respect other people. If you don’t respect yourself, you gonna have a misanthropic attitude.
The expression is not about indulging yourself with nice things.

Loving yourself, truly, will glow. The light you shed will be caught by others, like the reflections on the shards of a broken mirror. So, if you love yourself, logically, it will only lead to automatically loving others because you will see yourself in them, you will see Christ in them and feel the Holy Ghost in your soul.

My analogy is a broken mirror, because we are all of the same maker. So loving yourself is loving God for creating you, and it is completely different to pride or narcissism.

I have very low self worth to the point where sometimes I get very apathetic about existing in the future. Yeah its hard but I guess I just see it as if I let others just walk all over me, its like being humble and putting others first.

Humility is not thinking less of yourself, it is thinking of yourself less. Allowing people to walk all over you isn’t being humble, it is being masochistic. The most common fault among all people is probably the tendency to define ourselves by our perceived deficiencies, faults, failures, mistakes, et al. The key to a happy and successful life is to find in yourself your best attributes, and live in recognition of them. Putting others first is to walk in the footsteps of Our Lord. He put all of humanity first, by HIS OWN CHOICE! But Christ did not allow anyone to walk all over him. He showed that many times in dealing with His enemies.

Suggest going to you tube and entering “Respect Yourself” by the Staple Singers. It’s always good for my spirits when I feel down. Mavis has one of the best female voices in music.