Can anyone point me to some good resources to explain to Atheists why Mary can appear looking different.

One example being her image in Our Lady of Guadalupe compared to more recent apparitions. 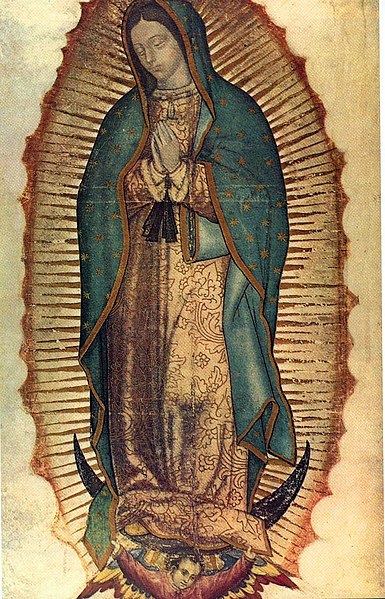 She also speaks in the hearer’s native language. It makes her accessible and more welcome to the visionary to see her in a way that is most familiar to them. Her glorified appearance (since she already has her resurrected body) would be too much for us to bear.

Our Lady of Guadalupe, BTW, is only partly painted. Most of the image is ingrained in the fabric itself through means only God knows. some details were added by native artists so the final work is both of divine and human origin.

To be honest, I have struggled with icons and apparitions in my lifetime. However, I have come to understand a little bit more in recent years.

Truly, I too was overwhelmed by the thought of how much Jesus must love his Mother to provide us with such a beautiful and powerful depiction of her. After all, the apparitions reveal her glorified body, not her historical features from Jesus’ time.

I thought about this for miraculous apparitions, or the varying locations of the stigmata on stigmatists in the palms instead of wrists, for example.

When miracles like the stigmata exist, it is important not to get too technical with them. For whenever God communicates like this with mankind, He is condescending to our level. For example, at various Marian apparitions, she has had a different nationality specific to the receiver of the vision.

The reason why a stigmata may not appear in the identical spot as actuality is because it is not a duplicate representation. It is a sign, that God enacts on our terms. For example, when Padre Pio would get pains on certain feast days, it did not mean the feast’s occasion had to have happened on that exact day. However, because the pain came on the day Padre Pio understood as a feast day, the event took on meaning related to that feast day. The same way, the Stigmata having come via the hands and feet, which is how the event had historically been presented, thus brought with it mankind’s understanding that this is a participation in the suffering in the cross. But, I wouldn’t be surprised, because of our more modern forensic studies, if a stigmata appeared in the wrists in the coming centuries.

We should also acknowledge, as other historians have speculated, if Jesus was crucified through the hands it could have been possible depending on nail placement or the use of ropes like in the movie The Passion of the Christ.

You can see other examples of God’s condescension to human levels in His very Incarnation, Scripture written in human language, etc… Some Scripture accounts vary from writer to writer, like the 3 different accounts of healing Peter’s mother-in-law.

The point with the language of Scripture, or a miracle, etc…is to determine what God is trying to communicate through our mechanisms of communication.

It is human nature to interpret and filter that which is beyond our comprehension/perception into something … anything which we can grasp though it be in an extraordinarily limited way.

This rule holds with natural input as well as divine.

The simplest demonstration of this concept is the classic: “Is the glass half full or half empty” query. This difference in perception grows exponentially more complex as the number of data points increases. Just look at a sporting event: even with many refs/umps coaches and even cameras; certain plays or calls have remained in dispute.

Now how much more complicated must this become when we are presented with something that defies all expectation?

It would be far more troubling if different people saw the same thing. That would not be possible and so would be clearly a scam.

Are there any images of Our Lady appearing as a more middle eastern form, this would help my case a lot.

=endaman;10534703]Can anyone point me to some good resources to explain to Atheists why Mary can appear looking different.

One example being her image in Our Lady of Guadalupe compared to more recent apparitions.

And Gods Role for her

John 19:25-28 Now there stood by the cross of Jesus, his mother, and his mother’s sister, Mary of Cleophas, and Mary Magdalen. When Jesus therefore had seen his mother and the disciple standing whom he loved, he saith to his mother: Woman, behold thy son. After that, he saith to the disciple: Behold thy mother. And from that hour, the disciple took her to his own. Afterwards, Jesus knowing that all things were now accomplished, that the scripture might be fulfilled, said: I thirst”

God who gives evidence of “not being able to give us suficient proof” of how much HE loves us; GIVES US HIS VERY MOTHER to share as our “mother too”

OTHER imanegs can too simply be "Artistic License "
As the “Mother to ALL humanity” in her Appearances She [and God] choose to have her appear as the same ethnetic people she appears to to make this MESSAGE clear to all of us.

system closed September 27, 2017, 11:02pm #8
DISCLAIMER: The views and opinions expressed in these forums do not necessarily reflect those of Catholic Answers. For official apologetics resources please visit www.catholic.com.