Memorial for the gallows where Catholic martyrs met their end

For centuries, the “Tyburn Tree” near Marble Arch in London was a place of abject horror for Catholics. Between 1535 and 1679 nearly 400 Roman Catholics were executed on the triple-pillared gallows for refusing to recant their faith, as priest hunters scoured Britain looking for traitors to the post-Reformation crown.

Even to this day devotees make an annual pilgrimage to the site and it is not unusual to see flowers and rosaries placed on the busy traffic island near Speaker’s Corner where the gallows once stood.

Since the 1950s the site has been marked simply by a stone roundel but Westminster City Council has begun looking for ideas for a more fitting memorial in honour of the hundreds of martyrs who swung from the Tyburn Tree – one that will very publicly associate one of Britain’s busiest shopping areas with the persecution of Catholics.

The council’s Public Art Advisory Panel has discussed some of the proposals at a private meeting, including an etching of the shadow of the Tyburn Tree into Yorkstone pavement brickwork. Another proposal is understood to involve three illuminated pillars to stand above the site the three-sided gallows once occupied.

Rosemarie MacQueen, Westminster’s strategic director for built environment, said: “We have been looking at ways to make the memorial to the Tyburn martyrs more substantial and informative. We feel that the hangings which happened there should be clearly marked for anyone who might want to understand the area’s history.”

Local Catholics have welcomed the decision to make a more public showing of Tyburn’s history. Monsignor Anthony Stark, a London priest and master of the Guild of Our Lady of Ransom which leads annual pilgrimages to the site, said: “It is the one site in the country where more people died for their Catholic faith than anywhere else. It is very important.”

Tyburn became a place of public execution in the 12th century and as the “King’s gallows”, it was used in particular for those people convicted of capital offences against the Crown. The first martyrs of the Protestant Reformation – St John Houghton and four other priests – were executed for treason there on 4 May 1535 for refusing to recognise Henry VIII as the head of the English Church. Houghton was hanged, drawn and quartered.

Watching their procession towards Tyburn from the window at his prison in the Tower of London, soon-to-be martyr Thomas More was said to have remarked to his daughter: “Look Meg! These blessed Fathers be now as cheerfully going to their deaths as bridegrooms to their marriage!”

In 1571, Queen Elizabeth I erected the Tyburn Tree, a triangular gallows purposely built for multiple executions. The supports were strong enough to hang eight people from each side of the gallows, allowing a gruesome public spectacle that visibly reinforced the Crown’s power.

The last Catholic to die at Tyburn for their faith was St Oliver Plunkett, the Archbishop of Armagh, on 1 July 1679. He had been falsely accused of being part of a papist plot to assassinate Charles II. The plot had been fabricated by Titus Oates, who falsely implicated more than 25 people who went on to be executed. Public executions continued for common criminals for a further century until they were transferred to the area outside Newgate Prison.

The stone roundel was taken up by the council last summer when roadworks were carried out, prompting an outcry from Catholics who feared that its removal was permanent.

Benedictine nuns from the nearby Tyburn Convent succeeded in persuading the council to put the roundel back in place. But they were told that the stone would remain on the site only temporarily while plans for a grander memorial were being drawn up.

Colin Barrow, the leader of Westminster City Council, said in a letter to the nuns that the local authority “recognises the historical importance of this plaque and designs have been produced to enhance the surroundings of the plaque”.

Thank you for posting this…it is a beautiful testament to our faith and inspires me to continue in life…a life that I still ahve as opposed to those executed. Christ was their crown and will be ours in our own time when He calls us home.:signofcross:

What is a greater memorial to martyrdom than the instruments of martrydom? Do we honor Christ’s Cross or a picture of the Cross? It is the Cross! So it is with all the relics of the saints. I believe that the roundel should be left to be.

Here is the link to the article:
independent.co.uk/news/uk/home-news/memorial-for-the-gallows-where-catholic-martyrs-met-their-end-1521686.html

And here are two photos of the marker. It apparently gets a lot of traffic and requires periodic cleaning. I’m glad the roundel was restored, but agree that a bigger memorial would be good.

I went to England seven times in the 1980s and 1990s, so I know exactly where ‘Tyburn Tree’ is located. I’ve also attended Mass at the Benedictine nuns’ convent nearby, and visited the crypt below their chapel that has relics of the Martyrs. I used to get mailings from them, too-don’t know how that happened!

Given the hostility in the UK today towards Christianity, I’m very surprised [though in a happy way] that there are plans to build a more durable memorial to the Martyrs of England and Wales.

I’m also glad there were Catholics who raised an uproar when the current paving-stone memorial was removed! Good for them to stand up for the Faith, watered with the blood of the Martyrs!

There’s hope for England yet…

“Faith of our Fathers, living still, in spite of dungeon, fire and sword…” [words of Father Faber]

Given the hostility in the UK today towards Christianity, I’m very surprised [though in a happy way] that there are plans to build a more durable memorial to the Martyrs of England and Wales…There’s hope for England yet…

In spite of the English truculence and resistance to the Holy Spirit, there will always be hope for the Faith there because of the red martyrdom of so many saints (‘the blood of the martyrs is the seed of the Church’ Tertullian) and because of the white (bloodless) martyrdom of so many converts at the time of the Oxford Movement and afterwards (preeminently Venerable John Henry Newman, but also many others such as Tolkien’s mother).

And Plunkett’s descendant (who was also devoutly Catholic) died at the hands of a British firing squad during WW1 after the Easter Rising in Dublin - one of Plunkett’s other descendants Lord Dunsany (whom I reccommend as a writer for anyone who likes fantasy) was actually fighting against him on the other side and was captured although he seems to have found his captors pleasant gentleman from his memoirs. One of Plunkett’s other descendants became Protestant and established a widely influential co-operative farm system in Ireland.

Just thought I’d point that out as a matter of somehwat off topic historical interest.

There are a number of sites of Catholic interest from this period around London and the British isles in general - you can find mass rocks in Ireland from the period where the penal laws forbade the open celebration of mass, so people would gather in the open - sometimes people would etch a cross on a rock or it would be topped off with stone broken of a church. Later on, people used to gather in private houses before the laws stopped been enforced and were finally later overthrown, mass rock below as an example:- 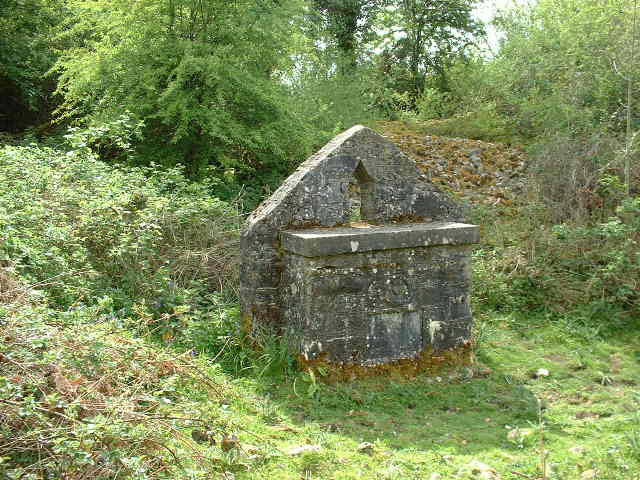 I find this all interesting! Although my grandparents came straight from Sheffield, I have never had an interest in my British ancestry. I guess there are more ‘french’ genes in me!:o

I shall now totally derail the thread and start up about the large number of connections between French and Irish histor…ughh. (at this moment a mysterious figure gags Jharek and pulls hims off stage.

In spite of the English truculence and resistance to the Holy Spirit, there will always be hope for the Faith there because of the red martyrdom of so many saints (‘the blood of the martyrs is the seed of the Church’ Tertullian) and because of the white (bloodless) martyrdom of so many converts at the time of the Oxford Movement and afterwards (preeminently Venerable John Henry Newman, but also many others such as Tolkien’s mother).

I like the ‘play on words’ with your name, Tybourne!

Have you visited Tyburn Convent in London? It was wonderful to see so many relics of the Martyrs-even St. Thomas More!

system closed September 22, 2017, 8:36pm #11
DISCLAIMER: The views and opinions expressed in these forums do not necessarily reflect those of Catholic Answers. For official apologetics resources please visit www.catholic.com.