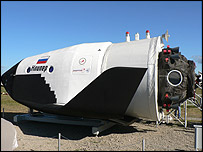 Russia is looking to the future and is planning to replace the Soyuz with a new vehicle that would be capable of taking cosmonauts into lunar orbit.

“The objective is to have a vehicle which is more comfortable than the Soyuz capsule which will be used with pilots and four passengers,” Alain Fournier-Sicre, head of the Esa permanent mission in the Russian Federation, told the BBC News website. “It’s meant to service the space station and to go between Earth and an orbit around the Moon with six crew members”…

The Clipper would allow Russia and Europe to collaborate with the Americans on lunar exploration, allowing six astronauts to orbit the Moon and to act as a back-up rescue craft, if needed… The Clipper also enhances the possibility of space tourism… The development and operational side of the programme is expected to cost around 100m (£68m) euros a year.

system closed September 23, 2017, 10:32am #2
DISCLAIMER: The views and opinions expressed in these forums do not necessarily reflect those of Catholic Answers. For official apologetics resources please visit www.catholic.com.