topic says it all. Post pictures of churches you think are particularly ugly or beautiful. Don’t forget to comment. Bonus points if it’s your home parish. I put this on back fence a month or so ago, but I think it’s more appropriate here. 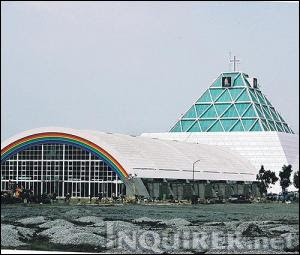 The rainbow is the icing on the cake! 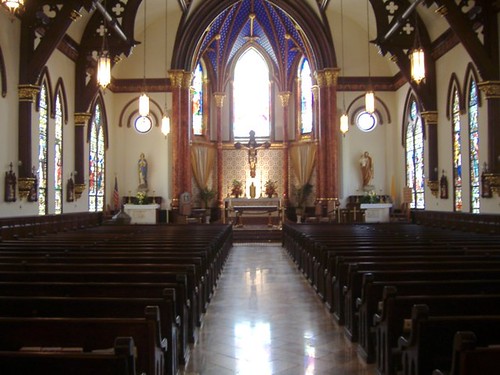 The cathedral in Austin. It was built in the mid 1800s if memory serves. I know for a fact it doesn’t have indoor plumbing, at least.

Sacred heart co-cathedral in Houston. A little sterile, but otherwise pretty good. The exterior doesn’t look so nice, though.

I definitely wouldn’t describe the cathedral in San Francisco as beautiful… It reminds me of the inside of a washing machine: 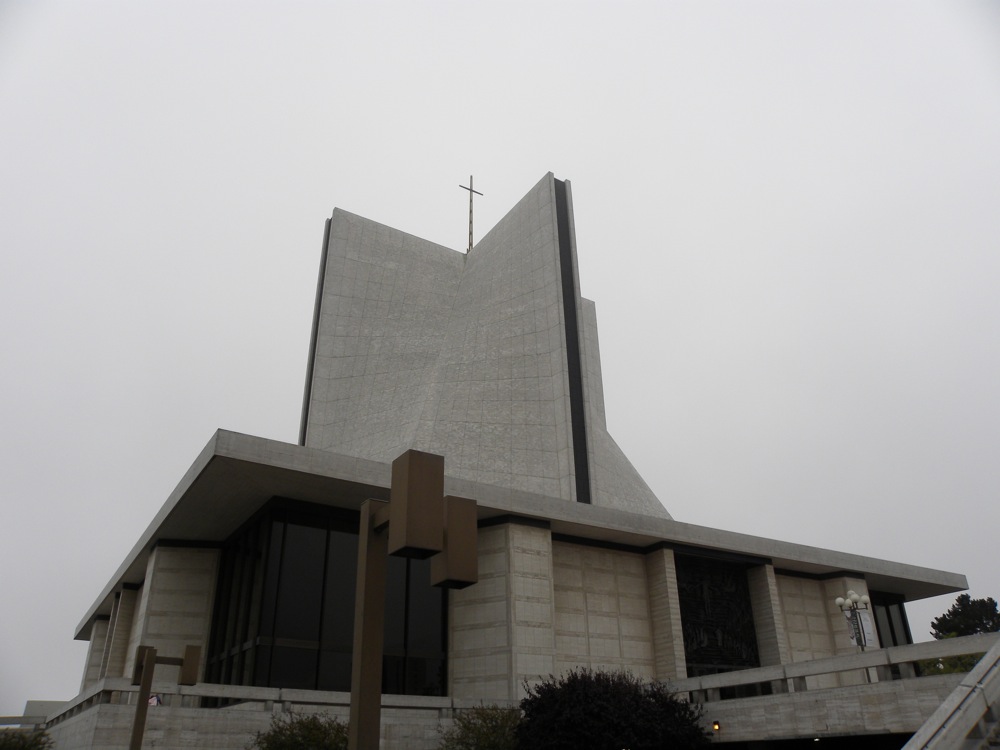 On the other hand, across town St Ignatius is beautiful (where my husband’s graduation was held last week: 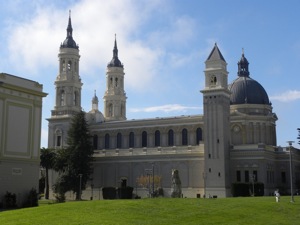 And I love my alma mater’s chapel at Saint Mary’s College of CA: 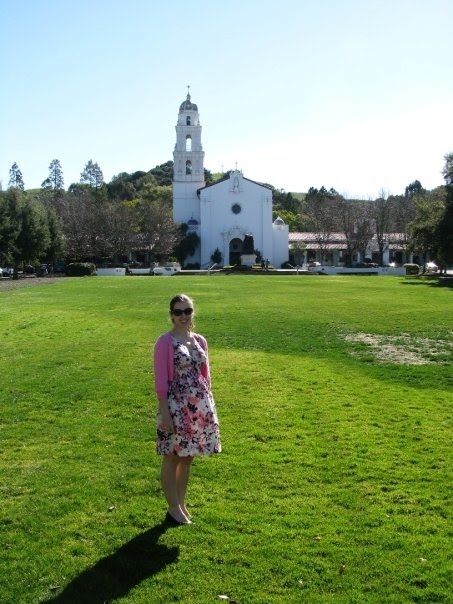 This picture does not do justice to the grand and breathtaking icon of Christ the Pantocrator, borrowed from the Orthodox. In fact, the whole church decor has a Byzantine flavor. Check out the smaller icons on the walls.

I also should give credit to the blogger of Catholic Churches of Manhattan who took these pictures. 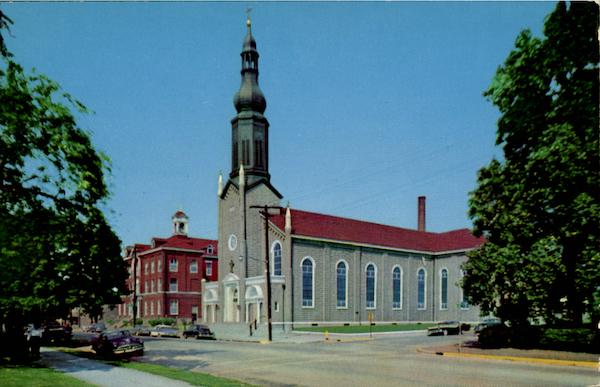 Same church for the Outside.

Since someone mentioned churches that look like things, here’s the basilica of Our Lady of Guadalupe. It looks to me like a space ship. Others liken it to a roulette wheel:

I wonder if the same architect did this kurdish monument thing: 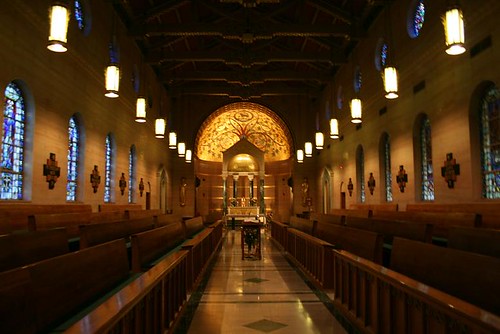 I’m fortunate enough to be able to see the gorgeous Cathedral of Saint Paul every time I go downtown and to have been confirmed in the beautiful Basilica of Saint Mary’s in Minneapolis. I also belong to one of the best looking churches I’ve ever seen, which is unfortunately closing this Pentecost. :sad_bye:

(I didn’t post pictures but you can look up the Cathedral and Basilica online.)

This one looks like a thatched roof cottage. Maybe Trogdor will burninate it.

I honestly don’t think there are ugly churches

Here are some pictures of Portuguese churches:

I honestly don’t think there are ugly churches

maybe not in Portugal

(those are beautiful btw)

I live in Canada and sadly have seen some ugly churches

(though there are some really nice ones too!)

I am sorry but I cannot begin to tell you how saddened I was by the so called “beauty” of the Our Lady of The Angels cathedral in Los Angeles.
http://www.downtownlawalks.com/uploads/Image/cathedral-low%20res.jpg

This is supposed to be our Blessed Mother. How sad.
http://upload.wikimedia.org/wikipedia/en/2/24/The_Virgin_Mary_by_Robert_Graham.jpg

And ugg the sanctuary
http://viewpictures.co.uk/ImageThumbs/CC2193AA-006/3/CC2193AA-006_Cathedral_of_Our_Lady_of_the_Angels_Los_Angeles.jpg

This is supposed to be our Blessed Mother. How sad.
http://upload.wikimedia.org/wikipedia/en/2/24/The_Virgin_Mary_by_Robert_Graham.jpg

I thought it was a eunuch.

Next up is Saint Mary’s in College Station. I assisted hear for several years before discovering another parish nearby that had an earlier mass. The earliest offered here was 9am, which was very inconvenient for me. I grew up going to 7:30, and even 7am for several years.

And here is Our Lady’s in Austin. It’s a Maronite parish If I can manage to get a job in Austin, this is where I’ll be going 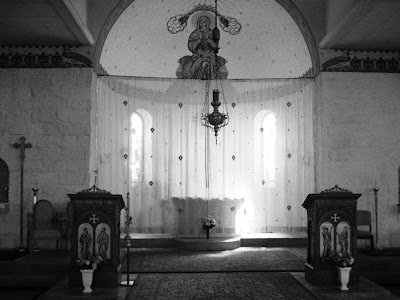 This is Thomas Aquinas, where I ended up my last 2 years in college. This is the most orthodox latin rite church I’ve been to. Meaty homilies, organ music, occasionally Latin. I even heard there was a movement to start a Latin Mass

Ahhhh, how nice, the Blessed Virgin is a curly headed African boy dressed in a kimono.

actually, as traditional architectural styles go, I’ve never been a fan of these spanish and portuguese styles. The kind with facades incrusted with statues, sort of like a 3d version of a byzantine church where every inch of wall and ceiling is covered in icons (though that’s actually really nice).

This one looks like a thatched roof cottage. Maybe Trogdor will burninate it.

Reminds me of that enormous Basilica that still isn’t completed from the 1800s. The inside looks something like a midieval forest - or midevil forest.

Someone - please tell them to “Just stop.”

I’ve seen this Church on EWTN - Fr. George Rutler has filmed his program, “Christ in the City” here.

I’ve seen this Church on EWTN - Fr. George Rutler has filmed his program, “Christ in the City” here.

Yes, he has a very reverent OF mass.