Shades of going in the direction of the French Revolution . . . 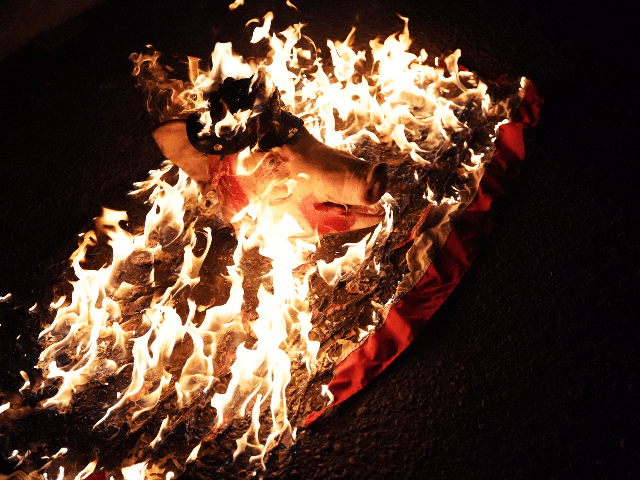 A day after Oregon Gov. Kate Brown said that state police would replace federal police to protect the federal courthouse in Portland, protesters outside the building set ablaze a severed pig’s head, donned with a cop hat, sitting on an American flag.

“Antifa protesters dumped a bloody severed pig’s head on an American flag outside the Justice Center in downtown Portland,” journalist Andy Ngo reported on Twitter. “They put a cop’s hat on it and set all of it on fire.”

Protests across the country . . . have devolved into riots where properties have been burned and looted and police have been the targets of violence. . . .

To our law-enforcement friends here.

I have been warning you here for years about how the national left for a large part, despises you (yes there are exceptions, but even those exceptions have been pretty quiet about supporting you in all of this again).

I warned you folks about how the left wants to destroy the country but especially the First and Second Amendments.

Please don’t think because you are “law enforcement” that you will be able to posess your fire arms for yours and your wife’s protection. (Or “husband” as the case may be.)

The left wants to disarm you too. (Except for the bodyguards of their elites and to a certain extent, for themselves).

And our retired law enforcement friends, who have been risking not only life and limb, but your family’s lives too. The left will go after YOUR guns first.

They will say “Retired police need no guns.” (They like to make decisions about other people’s “needs” for them).

But you will remember the gang member you put away’s threats against you, the DA, and your families as he was being carted off out of the courtroom to jail in chains.

They are ALL proverbial Kathy Griffins now.
And you are all proverbial Donald Trumps now.

If interested, insert “Kathy Griffin with Donald Trump” at https://duckduckgo.com/

Please do not trust your fate in the hands of a leftist.

This is like something out of Lord of the Flies.

This is not really happening according the Rep.Jerry Nadler. These are peacefull protesters." They are mothers and veterans and mayors.”

And my rifle is a peace-pipe.

They have been putting severed heads of pigs on police cars in the Uk, and they have pig heads on poles in the US in the past…

St. Michael the arch angel defend us in battle be our protection against satan.

Thank you though for informing me on this.

The rebellion is a wider phenomenon than I might thnk.

This is like something out of Lord of the Flies .

I was thinking the Food Channel!

I was thinking the Food Channel!

What kind of Food channel are you watching?

They have 3 permanently blind police officers so lasers are a real concern.

At least three federal agents who were deployed to Portland, Oregon this past week to defend the federal courthouse and to bring quiet to the city were left “likely permanently…

I’d call them them animals but that would be an insult to animals. They are a bunch of evil savages.

What kind of Food channel are you watching?

I think its man and fire…nothing like roasted pork! yummmm!

I’d call them them animals but that would be an insult to animals. They are a bunch of evil savages.

We need to be charitable in our characterization of federal police…they are only doing what their bosses are forcing them to do.

They should have been doing much more months ago. It would have stopped these lunatics. A loud speaker 30 minute warning that they clear out or else…

They should have been doing much more months ago. It would have stopped these lunatics. A loud speaker 30 minute warning that they clear out or else…

The mayors did not want it to stop. They could have. They want to spread the misery as Catholic often posts. It does not matter to them that the protesters are permanently blinding police officers with lasers.

I understand all that. My comment was in the context of this thread. That’s why I said they should have, and not only could have, stopped it in the beginning before all the destrution and violence. That’s if the leaders cared and wanted to stop it but now we know they didn’t.

But, but they are peaceful!!

"members of the protest became angry that he was recording them..."

This is like something out of Lord of the Flies.

I was thinking they resemble Mussolini’s blackshirts.

The Americans are starting to seem as militant as the French! This is a very cool gesture, props to them.