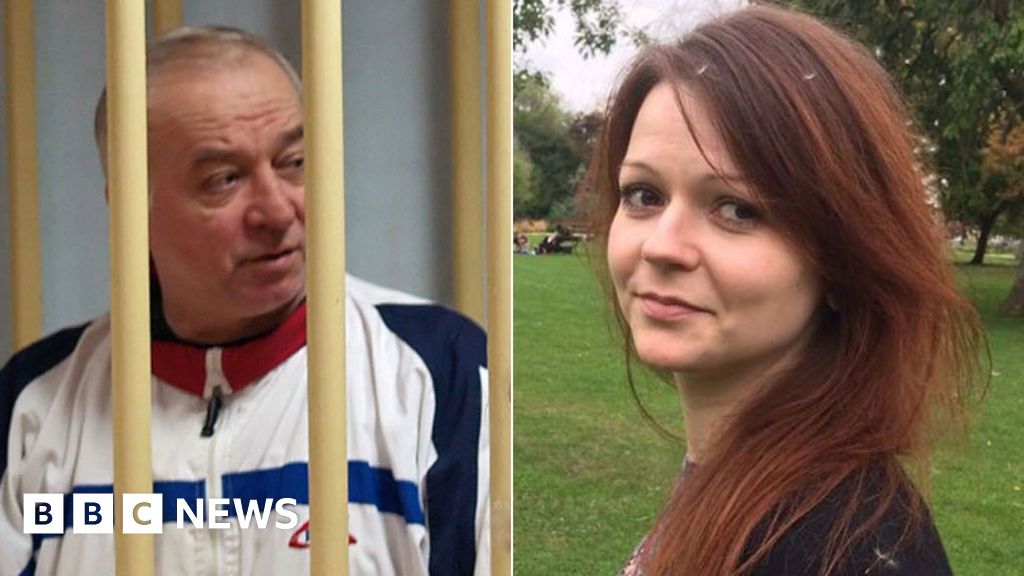 The UK, US, France and Germany say there is "no plausible alternative explanation" to Russian responsibility.

The leaders of France, Germany, the US and UK say there is “no plausible alternative explanation” to Russia having been behind the nerve agent attack in the UK.

They condemned the “first offensive use of a nerve agent in Europe since the Second World War”, calling it an assault on UK sovereignty.

In Washington, US President Donald Trump said “it certainly looks like the Russians were behind it”.

The UK has expelled Russian diplomats.

“We do hold Russia culpable for this brazen, brazen act and despicable act,” Prime Minister Theresa May said during a visit to the site of the attack in Wiltshire.

Mr Trump said it was a “very sad situation” that the US was taking “very seriously”.

In France, President Emmanuel Macron is to snub the official Russian stand at the Paris book fair on Thursday, officials said. Earlier Mr Macron said he would announce more measures in the coming days.

Russia has denied any involvement and vowed a swift response to the expulsion of 23 of its diplomats, whom the UK said were operating as spies.

I couldn’t find a thread on this despite it being such big news. Perhaps I overlooked something, but it seems like it’s worth a thread.

This is very troubling news, and I’d be concerned as to how this might escalate. The UK has expelled Russian diplomats from the country and is going to impose economic sanctions on Russia, although only reasonably minor ones. It will be interesting to see how Russia escalates things from here.

With Putin brazenly unveiling his new super nuclear weapon a few weeks ago and this now brazen poisoning in the UK, it seems he is deliberately trying to provoke conflict. He has Trump over a barrel with seemingly something on him because what other reason does Trump stay mum on anything Putin does? Putin has also continually expressed admiration for Kim Jong Un and supported his nuclear progression.

There is so obviously a whole lot going on below the surface that we are not privy to as yet.

Glad to say on Sunday I shall be voting for Putin.

Just like in any other election, it’s all rigged. Whether it’s China, Russia, or the USA. Either way, WWIII is inevitable

The Shadow Government demands it.

Good theme for a series of books in there, unfortunately it’s been used many times by now at this point.

In the spirit of LOTR

Maybe Trump is concerned that he could be a target. He does have a reputation for liking conspiracy theories

Or is it a conspiracy that he likes conspiracies? Perhaps he’s misdirecting us? Trust nothing…

Glad to say on Sunday I shall be voting for Putin.

Do you reject that Russia had anything to do with the latest Novichok poisoning or do you believe it and are ok with it?

Why is Trump like a pussycat when it comes to calling out Putin?

Traitors are routinely disposed of when they outlive their usefulness. Perhaps Russia disposed of him, perhaps the UK, perhaps the British. If you are going to use this as a standard to judge nations by then the US is in no place morally at all to judge any other nation nor is the UK. Bot engage in extra-judicial killing quite often.

Traitors are routinely disposed of when they outlive their usefulness.

Unless they’re an uncontainable threat to humanity, this is clearly morally wrong.

If you are going to use this as a standard to judge nations by then the US is in no place morally at all to judge any other nation nor is the UK. Bot engage in extra-judicial killing quite often.

For the record, I don’t agree with this policy. Government Death Squads are WRONG.

The arrest and assassination of Ngô Đình Diệm, the president of South Vietnam, marked the culmination of a successful CIA-backed coup d'état led by General Dương Văn Minh in November 1963. On 2 November 1963, Diệm and his adviser, his younger brother Ngô Đình Nhu, were arrested after the Army of the Republic of Vietnam (ARVN) had been successful in a bloody overnight siege on Gia Long Palace in Saigon. The coup was the culmination of nine years of autocratic and nepotistic family rule in South Vi...

Some believe that the USA was behind the Assassination of South Vietnamese President Ngo Dinh Diem. I don’t doubt it.