It is always about themselves with the left.

A few weeks ago she was calling this a love fest.

Now that SHE and HER HOME is involved she doesn’t like it. (Admitedly her “change” has been morphing before this).

I have a feeling Mayor Durkan has absolutely no problem with guns . . . . As long as they are from HER people used to protect HER.

She said the protest put her family and kids at risk

Seattle Mayor Jenny Durkan expressed outrage after Black Lives Matter protesters showed up at her home Sunday afternoon, despite her previous support and defense of the “CHOP” encampment.

Ditch the fake news ==> Click here to get news you can trust sent right to your inbox. It’s free!

Protesters targeted her home after Durkan announced last week that the city would no longer support the Capitol Hill Organized Protest encampment and would seek to remove the concrete barriers that helped define the autonomous zone. But the CHOP remains intact. . . .

. . . "Mayor Durkan and her family are in the state program to keep their address confidential because of the death threats mostly related to her work as Seattle’s U.S. Attorney under President Obama. . . .

. . . KING-TV spoke to one protester about why they targeted her home.

“We came down to Jenny Durkan’s mansion to bring the demands of the movement and of the families who have been impacted by police violence, uh, to her doorstep and she seems to not be able to hear our demands any other way,” she said.

Complicating the matter was yet another shooting Monday morning at the CHOP. One black 16-year-old teen was shot and killed, and a 14-year-old was injured and is in critical condition. Police are investigating the incident, but no suspects have been identified. 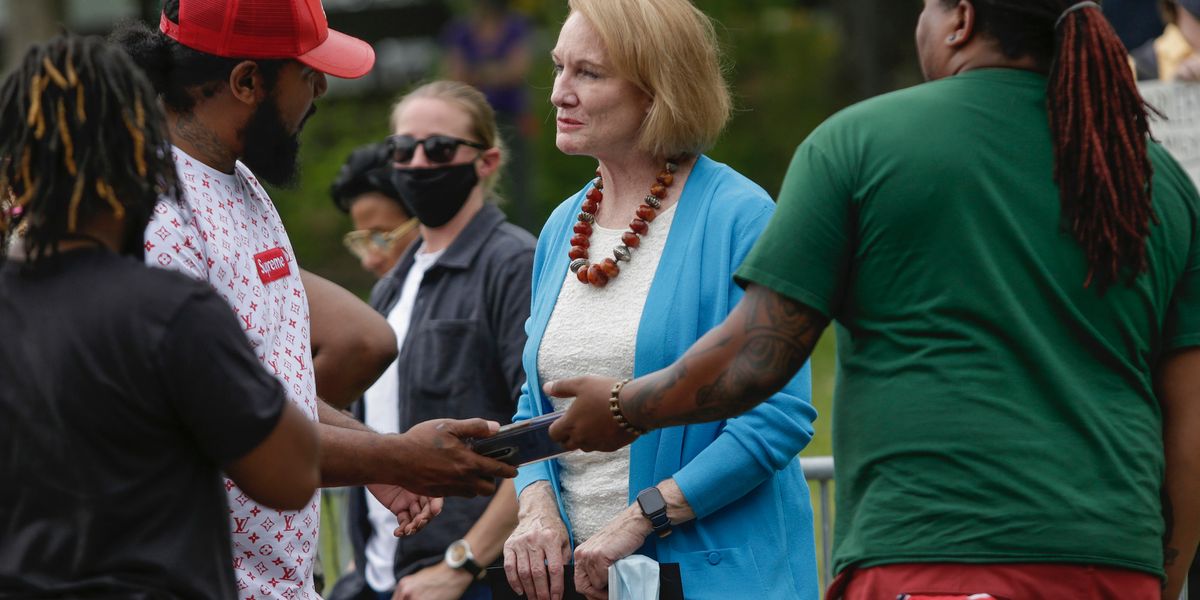 Seattle mayor who defended CHOP is outraged after protesters showed up at her...

She said the protest put her family and kids at risk

Seattle Mayor Durkan: ‘We Could Have the Summer of Love’ – We Have Four Blocks That Are ‘More Like a Block Party’

On Thursday’s broadcast of CNN’s “Cuomo Primetime,” Seattle Mayor Jenny Durkan (D) stated that in the city, there are four blocks that are “more like a block party atmosphere” and “We could have the summer of love.”

Durkan said, “We’ve got four blocks in Seattle that you just saw pictures of that is more like a block party atmosphere. It’s not an armed takeover. It’s not a military junta. We will make sure that we can restore this. But we have block parties and the like in this part of Seattle all the time. It’s known for that. So, I think the president, number one, there is no threat right now to the public. And we’re looking, we’re taking that very seriously. We’re meeting with businesses and residents. But what the president threatened is illegal and unconstitutional, and the fact that he can think he can just tweet that and not have ramifications is just wrong.”

Host Chris Cuomo then asked, “The counter will be, block parties don’t take over a municipal building, let alone a police station and destroy it, basically thumbing their nose at any sense of civic control. . . .

. . . We are — we have our public safety approach in one way. And during this time, a number one priority every American city has is to protect the First Amendment right. Our country was born out of protest. The right to gather, the right to protest, the right to challenge government when it’s wrong is our most fundamental constitutional right. It’s a reason it’s the First Amendment. And as a mayor of the city, I will do everything to protect that right and balance the public safety. I think not only can we do both, I think we have to do both.” . . .

. . .Cuomo later asked, “How long do you think Seattle, and those few blocks, looks like this?”

Seattle Mayor Durkan: 'We Could Have the Summer of Love' - We Have Four...

On Thursday's broadcast of CNN's "Cuomo Primetime," Seattle Mayor Jenny Durkan (D) stated that in the city, there are four blocks that are "more like a | Clips

Doesn’t she know that parties are driving the spike?

But she’s . . . upset. . . now, trying to find who leaked her address.
As a former Federal DA, she’s afforded confidentiality under the law and it would be illegal to enable what happened. She’ll have to move now. 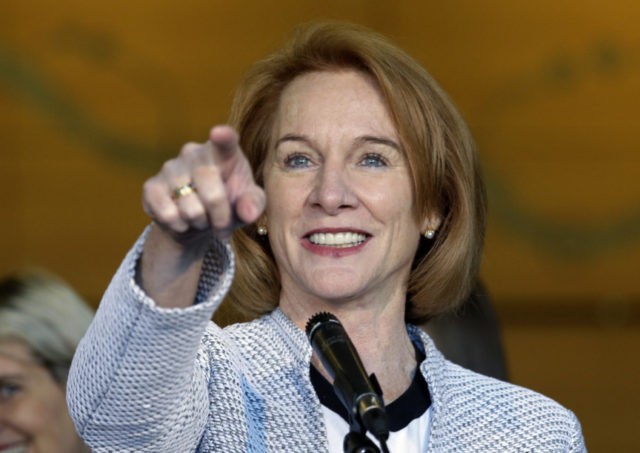 Seattle Mayor Jenny Durkan (D) on Wednesday evening told President Donald Trump to “go back to your bunker” after the president threatened to use the federal government to free part of the city occupied by far-left protesters called the “Capitol Hill Autonomous Zone.” . . .

Seattle Mayor Tells Trump 'Go Back to Your Bunker' After Tweet on 'Autonomous...

Seattle's Jenny Durkan told Trump to "go back to your bunker" after the president threatened to free the "Capitol Hill Autonomous Zone." 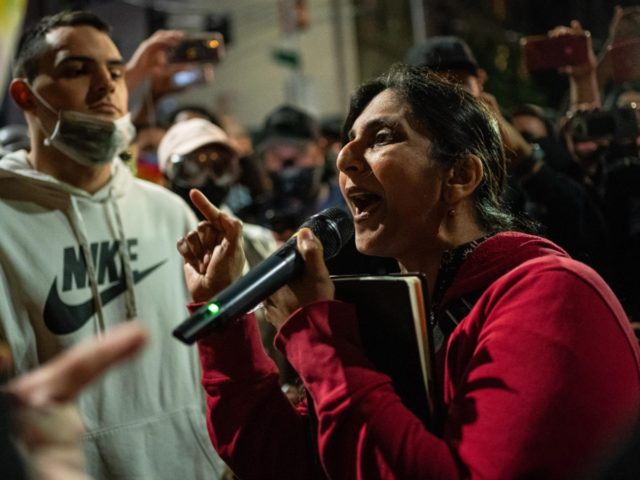 And this attempt to fool leftist and undecided voters . . .

Washington Gov. Jay Inslee dodged a bullet when Politico failed to ask him during an interview about the police-free autonomous zone.

I repeat what I said in the other thread: like many progressive elites, she can sure dish it out, but she can’t take it when it comes back at her.

I am so not feeling sorry for her. She dug her own hole and it’s interesting that everyone who’s anyone in the Democrat and progressive ranks are suddenly abandoning her.

This is so typical of the rich white leftists: they make decisions for the rest of us for which they refuse to bear the costs if they can help it.

By the way, how the heck does Durkan afford a $5m home on a US DA’s salary and then a mayor’s salary? Turns out she’s gay and came out long ago. Ok I don’t have a problem with that by itself. But she doesn’t want to share any information about her partner, Dana Garvey. Here are some interesting answers:

What we know about Mayor Jenny Durkan and her longtime partner, Dana Garvey.

Even though we are referring to Garvey as Durkan’s “partner,” they are not registered domestic partners and they are not married. Because of this, Durkan is able to shield Garvey from much of the public disclosures that the spouses of previous Seattle mayors have been subjected to.

Seattle mayors, like all city employees, are required to file financial disclosure forms that clearly describe what they own and their business relationships. That disclosure requirement extends to the spouses of politicians because Washington is a “community property” state, where your assets are shared with your legal partners, according to Wayne Barnett, executive director of the Seattle Ethics and Elections Commission. These disclosures are intended to prevent public officials from making decisions that directly benefit their own finances. We wouldn’t want an official awarding contracts to their own business, and disclosing their assets publicly helps prevent such moves.

These laws apply to Durkan, who filed a financial disclosure statement in which she said she was worth $5.75 million (including a checking account with more than a million dollars in it and stock in Costco and a company called Nanometrics). But what Garvey is worth (and what she invests in) is anyone’s guess.

By all indications, Garvey is worth a lot of money. Not only has she worked in high-paying corporate jobs, and not only does she own her own companies, but she very likely started her life with some change in the bank. Her father was a Louisiana telecom magnate who sold his wireless telecommunications firm for $400 million, according to an obituary published in the Times-Picayune in New Orleans.

Guess she is the one who will need a bunker now.

Guess she is the one who will need a bunker now.

I’m sure her partner can afford it.

. . . This is so typical of the rich white leftists: they make decisions for the rest of us for which they refuse to bear the costs if they can help it.

By the way, how the heck does Durkan afford a $5m home on a US DA’s salary and then a mayor’s salary?

Maybe the money was inherited like Trump’s money was?

What a fraud this lady is. Suddenly it isn’t so fun when the target is painted on you. She’d be an embarrassment to most normal cities in America.

Rumor has it this militant Marxist is the official who leaked the Mayor’s home address.

Notice that most of the mayors of the cities with riots and insurrection are Democrats. They’ve lost control.

Los Angeles Mayor Eric Garcetti was announcing restoration of restrictions on the city. When asked about the protesters camping out in front of City Hall, he had nothing to say.

The rules only apply to conservatives and white folk. Protestors can do what they want, we don’t stop arrest looters and statue topplers, and if black Americans want their own song because simply being American isn’t good enough, we’ll coddle them too.

What’s that saying, “what goes around comes around” lol

Notice that most of the mayors of the cities with riots and insurrection are Democrats. They’ve lost control.

It must REALLY hurt because what the Left wants more than anyting is control. Opinions, facts, and feelings contrary to their dogma cannot be tolerated by the “tolerant” Left.

I’m with you. Wish these people would quit infringing on my white privilege that I have worked so hard to earn!

@dscath in response to concerns expressed over “riots”, “insurrection”, “looters” and statue “topplers” . . . .

Wish these people would quit infringing on my white privilege . . .

To the readers here.

There ya have it. Draw your own conclusions.

To the readers here.

There ya have it. Draw your own conclusions.

Please do, remembering satire is indeed an art form,

Please do, remembering satire is indeed an art form

My mistake and apologies.

Glad to see you condemn the rioting, looting, insurrection and statue toppling. Just like I do. . . .