I am still taking antibiotics and feeling under the weather. But I wanted to share that my husband and I discussed reconciliation tonight, after some frightening moments yesterday. I don’t know how it will go. I wanted to mention that he is referencing suicide himself so please pray for him. He can’t work any more–he’s going out on contract and getting sent home early and not getting paid. It always meant so much so him to be the provider, and he is overly concerned with material wealth. However I think I have finally scared him out of his abusing me and taking advantage of me by pushing this divorce thing forward. He seemed relieved and near tears when I asked him if maybe we could just drop it, forget all the bad and agree to live here together. He has a problem with a stated cult of selfishness (“living for himself”) that his parents encouraged when he was an adolescent and he has some problems that made that make sense to him, but I think he is finally realizing there are others out there, for instance, that I have feelings too. My parents got him all mixed up. There are also two neighboring families involved in our long-standing family situation who have interfered, but in Christ I have been able to address and let go of those issues. Part of it I have to leave to my son to forgive. And of course I understand now that I have to always be searching myself as well for my own errors whatever evil may have befallen me from whatever source.

It is late at night, I don’t sleep at night at all now, (I am sick right now, so I’ve been sleeping during the day, it’s complicated), and sometimes Alex, my husband, says things at night and changes in the morning.

But if it is the Lord’s will for the two of us to stay here together I would embrace that.

Studying the prayer to St. Michael Archangel so that I can say it for myself in the future, if I feel beset by evil demons again, but although I am ill I have felt at peace today. I am reviewing all my prayer threads and hoping to be able to follow at least some of all the good advice that was given, it will take time. The bad nerve in the ball of my foot is leaving me a little jittery but I am back in my old psychiatrist’s care and although I was fearful at first that he was angry at me I am feeling much more trusting and supported again now. I don’t think he is Catholic but he is a God-fearing man.

Bless him, and bless all of you.

I am feeling a little scattered but I just want to say, my life has been a terrible ordeal and the last few years and especially the last few months have been the worst of it, and I hope to be able to apply all that I have learned here to have a better future. Thank you again for all of your prayers.

:hug1: I pray for you and your loved ones, lynnehelen.

Tense moment, like I said, he’d wake up feeling and acting differently. Threatening to liquidate assets at great loss and go to Vegas. Yesterday afternoon threatened me about my lawyer “persisting,” but he won’t get off the fence. He denies he is in communication with my parents but he is, I just heard my father’s message on his machine calling himself “Grandad,” the deceit and intrigue they, my parents, and Alex, create is so thick it is sickening and I don’t want to live with it an more. I gave Alex a stern warning–no further communication with them, and he made a promise. Promises mean nothing to him. His empty promises all along are no longer currency with me.

I want the divorce. If he doesn’t, he will have to do A LOT to change. I have suffered unbelievablely, intensely, and needlessly for him, and called it a marriage. I won’t do it any more.

Please pray for him to get his head right and to LEAVE MY PARENTS** OUT OF OUR PERSONAL AFFAIRS.

**The Blessed Virgin Mary grants 7 special graces to the souls who honor her daily by saying 7 Hail Mary’s ****
**[FONT=Verdana]and meditating on her tears and dolors. This devotion was passed on by St. Bridget of [/FONT]Sweden.
Here are the 7 special graces:

(I noticed you joined CAF on the 15 Sept, Feast day of Our Lady of Sorrows: I belong to the Devotion to the Sorrowful Mother group; pop by anytime to check it out)

sign of peace, you don’t have an icon for it

The devotions to the Sorrowful Mother–I think that is what I have been looking for. I have experienced so much pain watching from a distance as others who didn’t care, cared for my son, because of my illness, or because they took advantage of it to take him from me.

Under fantastically desperate circumstances he experienced an eye injury 3 years ago, supposedly my husband was going to seek an award for it but he dropped pursuing it. His “best friend” (whose mother was one of those caregivers; I was also his) threw a dart at him when I was on a plane to England against my will to illegally open up a bank account there for my husband on the threat of divorce.

The plane got sidetracked by a storm in Atlanta and I was stuck for two days. I had my medication and my cell phone but no charger. I hadn’t had a shower before I got on the plane as I was ill. I finally followed my suitcases to Manchester on a sleeper flight, next to a poor youngish man who was very kind to me as I didn’t say a word to him all night and must have smelled awful. We got the news that night in England. The dart hit him in the upper white of the eye, penetrating to 2 mm from the brain.

The drama, pain, confusion and chaos since that time have been unimaginable and my grief for my son (in the motel room in Atlanta I had this terrible sense that something bad was going to happen, the worst, all my fears), I am only now coming to terms with.

With this help from you, thank you so much. I am offering up my pain to Mary, I don’t know the right words for how to say it, but it is helping me to understand that my son has his own life, will, and God’s-plan-for-him and that now he is 18 I have to accept what happened and trust for him in the Lord. His eyesight has returned to 20/40, but for a long time it was as if he didn’t have any eyes, he hid somewhere inside.

I know he will have to leave me in the end, and that I was overly attached to him. I don’t really know his mind very well as his father keeps himself a mystery as best he can and my mother took Ian when he was just an infant and got between us in a way that is difficult to explain. My main reason for wanting her out of the picture, all my own issues with her aside.

So thank you for picking up on that about the date I joined, that was very clever and thoughtful, and gives me a great sense of peace. 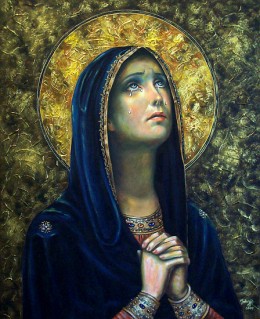 Most Holy Virgin!
Who art the greatest consolation
that I receive from God,
Thou Who art the heavenly dew
which assuages all my pains,
Thou Who art the light of my soul
when it is enveloped in darkness,
Thou Who art my guide in unknown paths,
the support of my weakness,
my treasure in poverty,
my remedy in sickness,
my consolation in trouble,
my refuge in misery,
and the hope of my salvation,
hear my supplications,
have pity on me,
as becomes the Mother of so Good a God,
and obtain for me a favorable reception
of all my petitions at the throne of mercy.

Praying for your spiritual wellbeing, lynnehelen, and that of your family.

system closed September 26, 2017, 3:47pm #8
DISCLAIMER: The views and opinions expressed in these forums do not necessarily reflect those of Catholic Answers. For official apologetics resources please visit www.catholic.com.