The first fruits from Africa in the CMI congregation

The Carmelites of Mary Immaculate (C.M.I.) are an religious institute for men in the Syro-Malabar Church. It is the first and only such Catholic religious congregation founded in India. 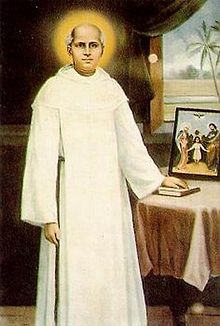 Its first monastery was established on 11 May 1831 at Mannanam, Kerala, India. The institute was founded by Fathers Palackal Thoma Malpan, Porukara Thoma Kathanar and Kuriakose Elias Chavara.
On 8 December 1855, the religious community at Mannanam was recognised canonically with the profession of vows of eleven priests headed by Father Chavara, the first prior of the congregation. The original name of the group was the Congregation of the Servants of Mary Immaculate of Mount Carmel. In 1860, this congregation was affiliated to the Carmelite Order and its members began to use the postnominal initials of T.O.C.D. (Third Order of Discalced Carmelites).

Different activities are taken care of by CMI Fathers through their parishes: Education for underprivileged, youth empowerment, institutions for physically and mentally challenged children, water projects, women empowerment and many other spiritual and social development projects.
https://fbcdn-sphotos-a.akamaihd.net/hphotos-ak-ash4/295293_267274420020668_128782897203155_600364_597104152_n.jpg

BRISBANE archdiocese has welcomed two priests from a religious order responsible for putting the state of Kerala at the forefront of education in India.

Congregation of the Carmelites of Mary Immaculate (CMI) Fathers Josekutty Vadakkel and Jose Thekkemuriyil, from Mysore province, will minister as associate pastors in the parishes of Annerley-Ekibin and Redcliffe.

The priests arrived with the order’s provincial Fr Varghese Koluthara on February 15.

Fr Koluthara, during his stay in Brisbane, also signed an agreement with Archbishop John Bathersby which will ensure the appointment of more CMI priests to the archdiocese.

The CMI provincial said during his meetings with Fr Meneely and Fr McCarthy he had been impressed by their “methodical approach and genuinely welcoming attitude”.

“I felt an immediate rapport and knew these were people who could be relied upon and so was very happy to continue the dialogue,” he said.

Fr Koluthara said he had found the same welcoming attitude and methodical approach to mission when he arrived in Brisbane archdiocese.

“The hospitality of Archbishop Bathersby and auxiliary bishops in our lunch at Wynberg touched my heart,” he said.

“I also saw methodical thinking in plans to assimilate our priests - both have time with CMI priest Fr Antony Vadakara at Coomera parish before taking up their roles as associate pastors.”

Fr Koluthara also referred to the proud traditions of the Congregation of the Carmelites of Mary Immaculate from which Brisbane archdiocese will now benefit.

“The CMI is very proud of the religious traditions of our Catholic religion and proud of our Indian traditions - at the same time we are open to other cultures,” he said.

"As far as I know the CMI’s are the first indigenous religious community of India.

"We are also the strongest and most powerful group among the Catholic missionaries of India - 2000 priests in all, with 600 seminarians.

“The CMI have 100 priests in Germany, more than 100 in USA and the arrival of two more priests from our order in Australia brings the total to 10.”

Education has been a key priority with the order.

"This was due to the leadership of Blessed Father Kuriakose Chavara - he was the brain behind the education development that has transformed the lifestyle of Kerala state.

“Because of him and the CMI, Kerala is now the leading state in education in India … It is also home to the strongest Catholic Church in India.”

Fr Koluthara will finish his term as provincial in April and will be able to devote more time to his teaching as Professor of Canon Law at Bangalore’s Dharmaram Pontifical Institute for Philosophy and Theology.

However, he aims to “complete this part of a very important mission to help settle the new priests into the archdiocese”.

It’s a role he emphasises his successor will continue.
Fr Meneely said the archdiocese welcomed the arrival of the two new priests.

“Fr Thekkemuriyil will be working alongside Fr Michael McKeaten in the Annerley-Ekibin parish,” he said.

"Fr Vadakkel will be with Fr Michael McCarthy in Redcliffe parish.

"They will be in these roles as a period of introduction to the archdiocese’s life and ministry.

“Both priests already have their licentiates and hope to take the opportunity of higher education at ACU (Australian Catholic University) while on pastoral placement.”

Fr Meneely said Fr Koluthara’s visit had been a good opportunity for a meeting between Archbishop Bathersby and a CMI representative from Mysore province.

“A discussion was able to be held on the ongoing partnership,” he said.

“The agreement that was signed will hopefully see a fruitful ongoing relationship and the arrival of further religious from the congregation in the years ahead.”

**AMERICA/PERU '-The Carmelites of Mary Immaculate: from India to the deserts of northern Peru
**

The Mass was presided by Mgr. Jose Antonio Eguren Anselmi, Archbishop of Piura, and after having read the decree of appointment of the parish priest, presented Father Tomy Mathew to the community and handed over the keys of the church, the baptistery, the confessional, the book of the Word of God and the sacred objects to celebrate the Eucharist as a symbol of his ministry in this parish. The faithful present frequently applauded, expressed joy and gratitude for the arrival of the new parish priest. During the ceremony, which took place on July 10, Mgr. Eguren assured the community that “the new pastor will be at their complete service, but Father Tomy, must have everyone’s cooperation, so that this community becomes rich soil and can give much fruit”. After the Eucharist, Father Tomy Mathew Moozhayil and Father Joseph Anthony Palackal were able to appreciate the manifestations of affection and welcome the people of La Union expressed since their arrival. Both priests from India, had already exercised their priestly ministry in the city of Arequipa, Camana and Chosica.

system closed September 21, 2017, 2:40am #5
DISCLAIMER: The views and opinions expressed in these forums do not necessarily reflect those of Catholic Answers. For official apologetics resources please visit www.catholic.com.