Translations of the Bible - NAB vs. RSV2CE

There’s so much to comment on here, but I just wish to share a few things with which I am familiar, in the hope that it helps someone.

To the original poster…

Funny how questions like yours always expand to involve countless translations about which you didn’t ask! Oh well, no worries right? It’s great that folks want to share!

Regarding the NABRE and RSV-2CE… as others have already noted, the RSV is essentially a revision of the previous RSV, which was a revision of the KJV. It does retain traditional language in many places that has been lost in other recent translations and it is generally not given to loose or weak translations for the sake of eliminating “him” or “he.” That’s good because it prioritizes accuracy over political considerations.

The NABRE has been recognized as a solid translation for the most part. While it does use inclusive language at times, it does it far less than the NRSV, NIV, JB, and others. And another point in its favor? It’s one of the few translations that (like the Douay Rheims) retains important theological terms like “Amen” and the “I AM” statements of Our Lord. That can be a plus not only for study but sometimes even in devotional reading, in my opinion.

Sorry for the long post but I hope it is helpful to someone.

Welcome Swordsman! Glad to see you jumping in on fire

Curious, what are the common alternatives used in other translations?

As for amen, many translations have used words like “truly,” “verily” or even “most assuredly.” Aside from losing the liturgical value and tradition, it’s unfortunate because there are not that many words attributed directly to Our Lord that the gospel writers conveyed (transliterated) instead of translating or paraphrasing. For example, “Talitha cumi” in Mark 5. There’s a reason Mark gives us the Aramaic instead of just the translation and many scholars believe it is because the actual words of Christ were so cherished from the beginning they were preserved. I love the think about that when I read the gospels! Also, the meaning of amen is richer that just “truly.” It’s an expression of “let it be so” or “this is trustworthy.”

Regarding the “I am” statements… most translations sort of hide them a bit in their attempt to make them sound more like natural speech. For example, you may see “I am he” or “It is I,” when the Greek (and Latin for that matter) that underlies it actually says simply “I am.” See John 6:20 or 18:5. In 6:20, the NAB text says “It is I” but alerts the reader in the footnote it’s an “I am” statement. In 18:5 they put the “I am” in the text. That’s just some off the top of my head.

That is very insightful, thank you for taking the time to elaborate.

For example, you may see “I am he” or “It is I,” when the Greek (and Latin for that matter) that underlies it actually says simply “I am.”

Wow, that completely undermines the metaphysical and cosmological depth that I have come appreciate that verse with.

I’ll continue clinging to the DR and RSV2CE

It seems I’m in the minority for I prefer the NABRE to the RSV2CE. Perhaps because it was my first Bible. It’s more readable and flows more smoothly and easier to memorize, for me at least. That’s why when I was looking to buy the Didache Bible I chose the NABRE translation over the RSV2CE. The Didache Bible NABRE translation also contains the original NABRE introductions and footnotes. It’s interesting to compare the two side by side. The Didache commentary from a total Catholic perspective, while the NABRE footnotes from the critical/historical perspective.

My 12 year-old daughter wasn’t a fan of the way the RSV-CE reads either, so I got her the Good News Translation, which I feel like at age 12 is perfectly appropriate since she’s not going to be doing any delving into semantics of why it’s more correct to say “Amen I say to you” vs. “Truly I tell you” or whatever. For basic daily reading, it seems to be a nice translation.

I read the RSV2CE just as much though for the Ignatius Bible footnotes which like better than either the Didache Bible commentary or the the NABRE footnotes. For now only the New Testament. The Old Testament is supposedly coming out soon.

I have the RSV-2CE and it’s the whole Bible… Am i missing something? Mine is kinda short on detailed footnotes, though…

Ah, okay. Thanks for clarifying

For now only the New Testament. The Old Testament is supposedly coming out soon.

It was supposed to come out this year, but now? Who knows. I think they’re still running a donations campaign to raise funds for it.

I really like the Ignatius RSV-2CE, so I’ll undoubtedly get the study Bible once it comes out. Although I’ve perused the Jerusalem Bible that they use in the UK(?) and Ireland and I really like how it reads too. And if I’m honest, I prefer the British spelling conventions to the US-English ones.

I really like the Ignatius RSV-2CE, so I’ll undoubtedly get the study Bible once it comes out. Although I’ve perused the Jerusalem Bible that they use in the UK(?) and Ireland and I really like how it reads too. And if I’m honest, I prefer the British spelling conventions to the US-English ones.

I’m worried for how it’ll be all in one volume. The NT study Bible is quite large and has ~700 pages. The OT should be much, much larger if they do the same treatment to it as they did the NT. I just hope they don’t skimp on the OT just because it’ll make the book too big. At that point I’d rather they publish a whole separate volume.

That seems legit. I hope the same. Don’t skimp on content; that defeats the purpose of a study Bible.

That seems legit. I hope the same. Don’t skimp on content; that defeats the purpose of a study Bible.

Exactly! I want all the details, especially since Scott Hahn is one of the theologians on it. His specialty is supposed to be (if I remember right) Covenantual theology, so I want to see extensive notes on the lead up to the New Covenant in place today. And lots of commentary on the precursors to the Eucharist (Passover, Shew Bread, etc.).

The OT should be much, much larger if they do the same treatment to it as they did the NT.

Don’t skimp on content; that defeats the purpose of a study Bible.

Using the “Look inside” feature at Amazon, we can already see a large part of the Ignatius Study Bible OT. The introductions and footnotes aren’t, in fact, on anything like the same scale as in the NT. 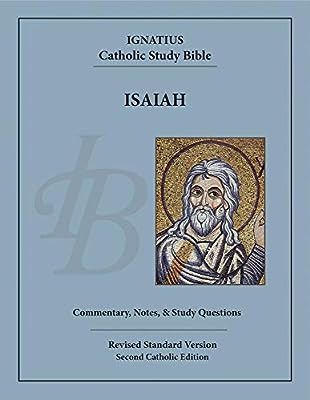 Just adding my two cents (not that my opinion is worth much more than that).

The advantage of the NAB-RE is that it’s the closest translation to what you’ll hear every day/Sunday at Mass (if you live in the U.S.). You’re already familiar with the translation. Footnotes aren’t part of the inspired Word and can easily be ignored (unless you’re looking for more of a study-bible type Bible). I also find that the NAB-RE sometimes works to clarify passages that (for me) are a little obscure in the RSV-2CE. That being said, I’m not the biggest fan of the NAB-RE. Sometimes the translation is so clunky that it reads more like the original text was plugged into Google-translate - one of the downsides to a translation that was done via a committee, I suppose.

The RSV-2CE is good, but for me the English doesn’t flow well and some passages remain rather obscure. I know many scholars (particularly Protestant converts to Catholicism) prefer this translation, but I suspect that more than a few of them prefer this because the RSV-2CE (based off of the RSV before it) is simply a Catholic revision of the KJB.

My personal favorite Bible is the Jerusalem Bible (followed closely by the New Jerusalem Bible). I’ve adopted this Bible for my own devotional reading because when I first read St. Paul’s letters translated in the JB it was like I was reading them for the first time. Paul’s letters actually made sense to me - which is more than I can say for any other translation of his letters that I’ve read. I also like the JB because any time I hear scholars like Hahn or Pitre correct the translation of a word or phrase from the NAB-RE or the RSV-2CE, they always end up using the exact wording I find in the JB.

All this being said, I think the best thing to do is to have a small collection of translations because no one translation is going to be perfect. And, of course, balance out those translations by reading the Catechism side-by-side with the Bible.

I just ordered this one from Amazon today. “Supposedly” it’ll be here tomorrow, but knowing Amazon it might not make it til Thursday or Friday.

On the Amazon listing there was an option to “Look Inside” and I like how it reads. I even like the font (which, silly as it sounds, can make a book easy or hard to read). Thanks for the recommendation!

I even like the font (which, silly as it sounds, can make a book easy or hard to read).

I agree, it can make a big difference, particularly in a book such as the Bible where – for obvious reasons – they try and cram as many words onto each page as they possibly can

1 Like
← previous page
DISCLAIMER: The views and opinions expressed in these forums do not necessarily reflect those of Catholic Answers. For official apologetics resources please visit www.catholic.com.