May 26, 10:45 AM EDT By STEPHEN OHLEMACHER and JONATHAN LEMIRE
Associated Press

WASHINGTON (AP) – Donald Trump reached the number of delegates needed to clinch the Republican nomination for president Thursday, completing an unlikely rise that has upended the political landscape and set the stage for a bitter fall campaign.

Trump was put over the top in the Associated Press delegate count by a small number of the party’s unbound delegates who told the AP they would support him at the national convention in July. Among them is Oklahoma GOP chairwoman Pam Pollard.

“I think he has touched a part of our electorate that doesn’t like where our country is,” Pollard said. “I have no problem supporting Mr. Trump.”

It takes 1,237 delegates to win the Republican nomination. Trump has reached 1,238. With 303 delegates at stake in five state primaries on June 7, Trump will easily pad his total, avoiding a contested convention in Cleveland…

Smart move by the delegates, since this outcome was a foregone conclusion.

The games have started and Trumps numbers are increasing because of the old and tiresome rhetoric which has been going on for 8-years manifesting usually in liberal lies, like Obamacare, Iran, Benghazi the emails and Hillary, its become predictable and expected. The condescending rap that suggests everyone is stupid but the Obama team is clearly rejected and a “correction” is needed. And thats not Hillary. Further he’s reached new levels of low… 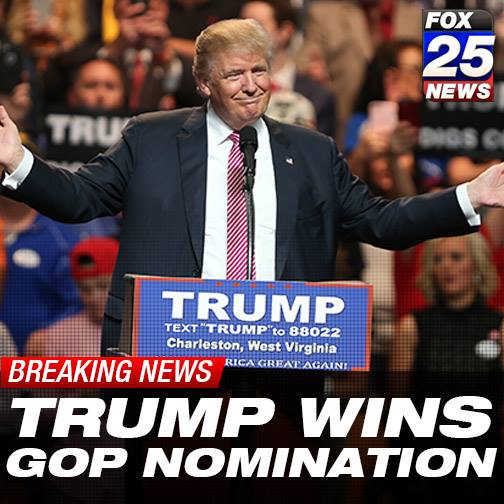 It’s funny how things worked out. Three months ago everybody was sure the Hillary would have the Democrat nomination sewn up and the Republicans were headed to a contested convention. Now it’s looking like the opposite might be the case.

The only number that matters is 270.

The only number that matters is 270.

You gotta win the semi-finals before you get a chance in the finals.

If you can’t win in the minor league you can’t play in the majors. Democrats will unite behind Bernie though, most Hillary followers here claim they were Bernie followers!!

Not retiring to Chicago, his home city.

Retiring to the USSC!

I was channel surfing and on Fox Business, they had excerpts of Trump’s live speech in North Dakota.

I found that if I went to YouTube, and typed in Trump, then I could get the whole of Trump’s speech.

Rubio: I’m willing to speak for Trump at the convention

Not retiring to Chicago, his home city.

I’m not sure I’d call it retiring. He and the First Lady want to give their daughter Sasha the opportunity to finish her last 2 yrs at her school. It really doesn’t surprise me given the great example they’ve been as parents to their children and the excellent role models the Obamas have been during their tenure as our First Family.