Trent Horn writes in, Why We Are Catholic, that St. John was martyred (footnote 52). Did he mean John the Apostle? If so, was John the Apostle martyred? I though our Tradition says that he wasn’t.

Trent Horn writes in, Why We Are Catholic, that St. John was martyred (footnote 52). Did he mean John the Apostle? If so, was John the Apostle martyred? I though our Tradition says that he wasn’t.

I have not read the book so I can not verify your exact quote or footnote so I will have to take it out of context and answer appropriately.

He may have been alluding to that St. John the apostle was not martyred in a physical death but rather a spiritual martyrdom.

Because John was at the foot of the cross and with our Lord as He died, John would have experienced that martyrdom on Good Friday and, thus, not needed to suffer through a physical martyrdom.

Again, I’m not sure how Mr. Horn is referencing this particular instance but this is how I understand the “martyrdom” of St. John the apostle.

I agree with you

In the EF there is a feast of the martyrdom of St. John the Evangelist. 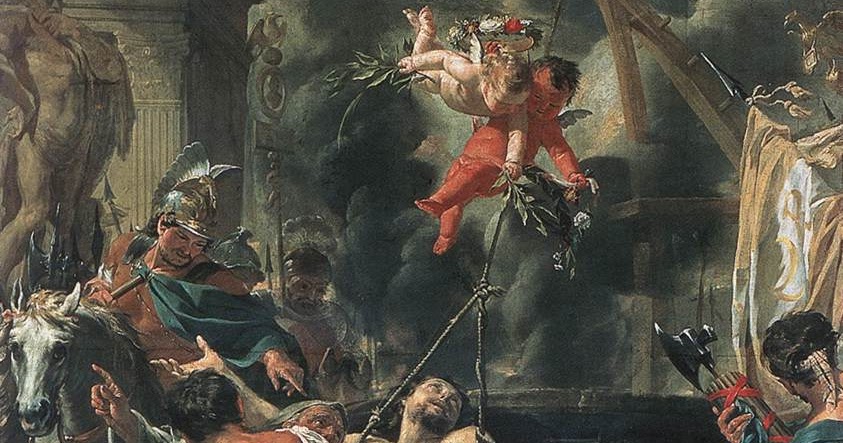 The Feast of St John at the Latin Gate

For a person to be considered a martyr they have to die for the faith. John, after being lowered into a bath of boiling oil, didn’t die, according to the article you linked me to, therefore, John was not martyred.

What’s EF? What can you tell us about the New Liturgical Movement.

That is not entirely true. In the Alelluia antiphon for our Lady of Sorrows, the BVM is said to have won martyrdom even though she did not die.

According to that same link:

“The question arises how the sons of Zebedee, namely, James and John, drank the cup of martyrdom, since Scripture tells that only that James the Apostle was beheaded by Herod, but John died a natural death. But if we read the history of the Church, in which it is told that he also for the sake of his witness (to Christ) was cast into a vessel of boiling oil, and thence went forth as a champion of Christ to receive his crown, and was at once exiled to the island of Patmos, we see that his spirit did not fail at the prospect of martyrdom, and that John did drink the cup of confession that the three children in the fiery furnace also drank, although the persecutor did not shed their blood.” (Commentary on Matthew, book 3, chap. 20)

James:
Nobody believe our Blessed Mother was martyred. We’re not going to
agree on this, but if you have the time could you tell me something
about the New Liturgical Movement? Thanks, and it was nice talking to
you.
John
Sent using Hushmail

Do I need to get the Alleluia verse for you for Our Lady of Sorrows?

Blessed are you, O Blessed Virgin Mary;
without dying you won the martyr’s crown beside the cross of the Lord.

Okay, James you win. I guess you aren’t able to or don’t want to share your thoughts with us on the New Liturgical Movement. If you’re a representative of the group, that doesn’t speak highly of them.

Why are my thoughts relevant? Or I am to give an overview of every website I link?

In the second general persecution, in the year 95, St. John was apprehended by the proconsul of Asia and sent to Rome, where he was miraculously preserved from death when thrown into a cauldron of boiling oil. On account of this trial, the title of martyr is given him by the fathers, who say that thus was fulfilled what Christ had foretold him, that he should drink of his cup

This is the best I could find. I get the impression there is nothing that passes as hard evidence either way.

Thanks, pnewton. I wouldn’t think that there would be any hard evidence in the history of the Church; if there were, I guess we wouldn’t be having any discussions about it. Thanks for your efforts and your civility.
I tend to think he wasn’t martyred given his being linked in the tradition with the John who was exiled to Patmos and there wrote Revelation.

I was raised and educated in the Baptist Church and seminary. It was always the prevailing theory that he died on Patmos.

What are you accusing me of?

I apologize for my lack of civility. I wasn’t accusing you of anything, but the tone I took was wrong. Please forgive me.

Thanks pnewton. That’s the prevailing theory I’ve always believed as well. As I said elsewhere, in order to be a martyr the person actually has to die.

St. John the Baptist was a martyr. Perhaps that’s what the original author meant? Otherwise, it sounds like a typo for “James.”

Traditionally, St. John the Evangelist was indeed preserved from martyrdom, although he did get into some dangerous situations. It’s said that people tried to poison him, for instance; and of course, he was sent to Patmos by the Romans, which was a pretty harsh environment for people sentenced to exile. But he kept on going and getting older and older. Finally, it is said that he announced to his people that the Lord had told him he was going to die, and he gave one last sermon and then passed away right after Mass. Some even say that he walked into his tomb first.

But yeah, it was well known that he was the only one of the Twelve (except Judas the traitor) who didn’t die a martyr.

Hi Mintanka, for this from Trent Horn earlier. Looks like I could have skipped the topic altogether:

Thanks for writing. What you spotted was a typo. I meant to say that St. Paul was martyred, not St. John, which is why the previous quote from St. Polycarp talks about Paul’s martyrdom. I must have had St. John on my mind because Polycarp was John’s disciple. St. John died of old age in exile which is not the same as accepting death in order to not deny our faith (he would have died of old age whether or not he was exiled).