What is the difference between Roman Catholic and Byzantine Catholic?

The Roman Catholic Church is one of the 24 Churches in full communion with the bishop of Rome. All 24 of these Churches comprise the Universal Catholic Church, although around 99% of Catholics are Roman/Latin Catholics.

Byzantine Catholicism refers to a few of the 23 Eastern Catholic sui iuris Churches, in full communion with Rome who celebrate the liturgy according to the Byzantine Rite.

Here are all the rites in the Catholic church-

All the Many Rites of the Catholic Church (Including the Lesser-Known Ones),...

This is so interesting. So many I hadn't heard of!

There are many cultural and historical traditions in the Church. The Byzantine rite is simply one of quite a few rites in the Universal Church.

Generally, the order of liturgy is roughly the same among the rites, but the traditions that dictate how each rite is celebrated (e.g. language, music) can be quite different.

The largest Byzantine Rite Church in full communion with the Apostolic See is the Ukrainian Greek Catholic Church.

The word Divine Liturgy is typically used instead of Mass when referring to the Eucharistic celebration of the Byzantine Rite.

Note that the Byzantine Rite is one of five Eastern liturgical rites used in the Catholic Church.

Byzantine Rite Churches in full communion with Rome include:

Some of them have very little faithful and no official bishop at the head.

Note that they are all ‘Greek’ because that is the language originally used in the Byzantine Liturgy.

Byzantine Catholicism refers to a few of the 23 Eastern Catholic sui iuris Churches, in full communion with Rome who celebrate the liturgy according to the Byzantine Rite.

Historically there never has been only one rite.

The problem with this diagram is that it refers to the Eastern Catholic Churches as “rites.” We’re not “rites.” We’re Churches with our own history, traditions, theology, spirituality, and yes ritual traditions (i.e. “rites”). I’ve heard one priest describe it like this: “People don’t belong to a ‘rite.’ They belong to a Church sui iuris. The rite is what is celebrated by the Church.”

Shouldn’t there only be one rite?

I understand what you are saying and thank you for pointing it out.

I made sure to say “a few” to clarify that there are other non-Byzantine Eastern Rites.

Forgive me for my bad explanation, but that was what I meant to say.

Historically, both liturgy and theology varied, broken roughly by the boundaries between the greek-speaking eastern half of the empire, and the latin-ish speaking west.

There as an early document (“Constitution of the Twelve Apostles” ? something like that . . .) with some general principals.

Liturgy varied widely, and “the Bible” had yet to be defined. At some point, the liturgy from one of the other churches influenced and took over the liturgy in the capital, Byzantium. It spread and became normative throughout the eastern empire.

The West, on the other hand, didn’t have a uniform liturgy until Trent (prior to that, liturgy varied widely, although I think it’s something like half that used the liturgy of Rome and in latin [well, once Rome switched to the vernacular over the third and fourth centuries . . .], but I wouldn’t even bet a cup of coffee on the “half” figure, in either direction).

Byzantine practice has always held the liturgy in the vernacular, and it has always been the primary instructional tool in the faith. While Church Slavonic might seem at first to be an exception, it (and the Cyrillic alphabet) was created for the purpose of being mutually intelligible among the various Slavic people.

After the Great Schism, which actually took centuries to fully schis (schismatic? schismatify?

), the West was generally called “Catholic”, and the east “Orthodox”.

There are also other regions that followed neither pattern, many (most?) outside of the boundaries of the empire.

The east had multiple churches geographically, with patriarchs, while the west had one. There was never a time when the One, Holy, and Apostolic Church consisted of a single church, nor that it was all directly ruled from Rome.

Speaking in very rough terms, and with these being generalizations, and not denying that both aspects were present in both churches . . .

AFAIK, the Maronite, Ruthenian, and Italo/Greco/Albanian are the only Catholic Churches without Orthodox counterparts in their own area. In the US, both the OCA (Orthodox Church in America) and ACOD ( American Carpatho-Russian Orthodox Diocese) broke of the Ruthenians who had come to the US due to outright abuse by the local RC bishops).

The churches that joined in the two unions are the historical orthodox churches from those areas, with their orthodox counterparts having been created in response. Similarly, the Antiochan Orthodox Church was created after the last (and current) time the Melchite Patriarch entered communion with Rome. In the remaining cases, the Orthodox Church is the historical church.

The RCC is more than welcome to adopt the Byzantine rite . . .

The attempt to stamp out Eastern Liturgy and impose the roman rite on the Ruthenians in the US has much to do with ACROD having come into existence . . .

Think of it this way:

+Dad was handy with tools. +Mom was a good cook. I love singing at Liturgy. My sister has different tastes in clothing than I do. My brother is a math whiz.

In the same way, the Catholic Church is one family with different members. 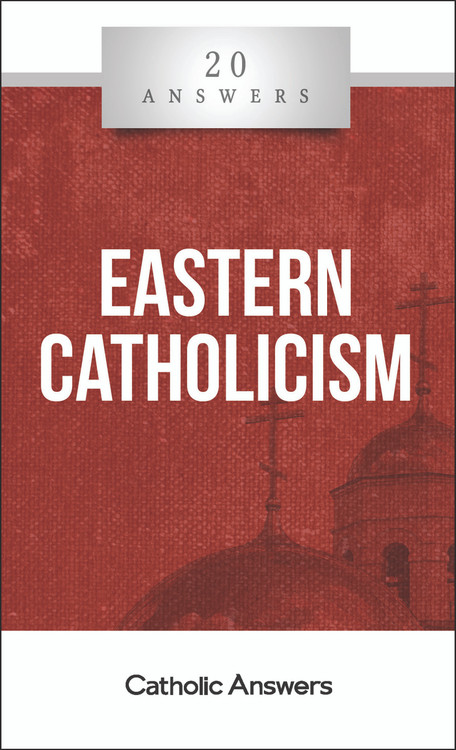 Shop now for all your trusted Catholic and apologetics books and media. We have everything you need to defend and explain the Faith.

If you went to a Divine Liturgy, in English, none of it would be familiar to you, except the reading of the Gospel. You might even wonder what country you were in.
Here is a person receiving communion under both species with a little spoon.

I agree with you but at the same time this is far from reason why Church has multiple rites.

And to anyone claiming Church should only have one Rite, I agree… and eventually it will. But that Rite won’t be Roman. It will be Divine Rite in the Heaven, as Angels and Saints revere God in same “rite”. But here on Earth all Rites are needed and respected, as they should be.

Oh, that makes sense, thanks!!!