Where to get Coptic Orthodox icons online?

I’m looking for Coptic Orthodox icons, but there aren’t too many sources out there online. Does anyone know of any?

Googling “Coptic Orthodox icons to buy” provided a number of links.
I hope that you find a satisfactory outlet.
God bless you

Ah ok, thanks! I think in eastern Churches, who writes the icon is important as well. Just wanted to make sure to avoid a situation like Monastery Icons…

You won’t find any of the old style Coptic icons anymore (the decline in traditional iconography in our church is well known, and is sadly not being fought against very much), but as far as the neo-Coptic, Byzantine-influenced style is concerned, Orthodox Bookstore has some. NB: I have never ordered icons from them, but I have ordered a few books, and they arrived in a timely fashion.

That’s a shame…They’re quite beautiful and peaceful.

Are Coptic Orthodox not writing as many icons as before or opting for other styles?

(I think our Coptic siblings would say they are Orthodox.

I’m not sure how to explain it. There’s just a different feel and look to it. And the icons have a more gentle appearance. (At least with some of the icons I have come across, Jesus can look very stern and mean. And yes, I am spiritually weak – it did cause a bit of agitation in my mind.)

You can extract the spiritual meaning and reverence from the icons without being so focused on the physical “realness”.

I wish there were Coptic icons of Catholic saints (like St. Francis or Therese of Lisieux).

(I hope I did not type any errors.)

I wish there were Coptic icons of Catholic saints (like St. Francis or Therese of Lisieux).

Or how about St. Cyril?

Or how about St. Cyril?

I take it that by Orthodox you mean Byzantine, such as what the Eastern Orthodox produce (or many of them, anyway; Georgian icons, such that I’ve seen them, tend to more closely follow the non-Chalcedonian Orthodox tradition, as that is what the Georgians historically were). It is a fair question. I described the modern Coptic icon style as “Byzantine-influenced” for a reason. These were never completely separate traditions, mind you, as the Copts (for instance) were Hellenized people, and as such inherited Greek ideas about art which were very widespread prior to their conversion to Christianity and for some time afterwards. As more and more native Egyptians converted to Christianity, however, there did develop a distinctly Coptic tradition of iconography, which has close parallels to those of the other non-Chalcedonian churches. I don’t really know a huge amount about art or art history, but I can say that non-Chalcedonian icons in general tend to be less concerned about bodily proportions (plenty of the frescoes I have seen on churches from the 15th-17th centuries just have formless half-ovals for bodies, and perfectly round heads), and hence tend to look somewhat “childlike” to those who are unfamiliar with the style/are more used to European Greco-Roman iconography. The “neo-Coptic” style is called that because the forms themselves retain more-or-less this same feeling, but have been modified with Byzantine-esque coloring (y’know…everything is that golden color, and all the lines are sharp).

A few examples might help to illustrate this. Here is a Coptic icon from the 17th century of the Holy Family’s flight into Egypt:

Here is the same scene illustrated in a modern Coptic icon in the neo-Coptic, Byzantine-influenced style (sorry it’s cropped; it was either this or a huge one that would ruin everyone’s view of this thread, and I don’t know how to resize on the fly):

Note how they both retain the heavily stylized and more simply formed shapes, with great attention paid to the faces in relation to the rest of the body, yet the new icon is much sharper and more crisp-looking, with heavy outlines.

In comparison, here is a Byzantine icon of the same scene:

In comparison to either of the above, the Byzantine icon is more intricate. Like the Coptic examples, a great deal of attention is paid to faces, but there are also fine details illustrated in the bodily forms, even down to the articulation of the limbs. Coptic (and OO icons in general) tend to be much more simple than this, not focused on the body and shadows/contours (compare the donkeys in the Coptic and Byzantine examples). When I look at a Byzantine icon, I get the sensation of staring at a deliberately distorted/exaggerated human form, but with their flowing, textured robes and careful use of shadow it still seems like they’re real people in the sense of occupying space in a 3D world, albeit one remade to illustrate theological truths. Coptic icons, by contrast, are less realistic “in time” or “in space”, as they are so deliberately reordered compared to the people and events they depict that you’re kind of forced adjust your relation to them accordingly. I’ve read Byzantine criticisms of them that say that they are too “cartoonish” to be effective, and I think that’s a fair criticism insofar as they do not ‘work’ as Byzantine icons do. There is a reason why the stern Christ of the Byzantine icon penetrates into the soul of the viewer – it has a certain weight to it that lends a kind of severity that is absent in other iconographic traditions. It ‘works’ on that level. The traditional Coptic depiction of Christ, such that it can be separated from the Hellenic influence on Egyptian art (e.g., the Fayyum portraits, which show that the Egyptians certainly excelled in painting realistic portraits; Coptic iconography is thus a deliberate evolution away from that), is perhaps no less stern but nevertheless does not evoke the same feeling; it is rather more otherworldly, if I may say so with all due respect to the Byzantine tradition. See, for instance, this 12th century icon of Christ: 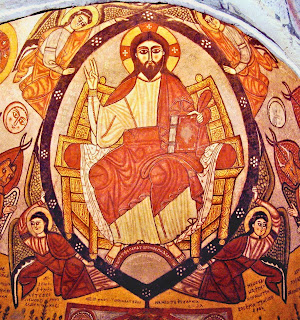 Compared to this Byzantine version:

I hope the icons above make the differences clear.

Thank you for the explanation!

I was going to say the Coptic icons resembled cartoons, but I didn’t want to be disrespectful. They are, after all, windows into heaven. With more “realistic” icons, I feel more present, and it makes me feel shame that I would be so “close” to sacred images. (OK, I know Christ is truly present in the Eucharist…but my mind is simple.)

Recently I stumbled upon these:
saint-mary.net/mm/icons/stmarys_icons/

So these are the neo-Coptic styles? They’re very golden

Yeah, those are all neo-Coptic/Byzantine style. That’s pretty much all you’ll find in most churches now, since very few still make old-style Coptic icons, and a lot of what is out there of historic significance is to be found in museums rather than churches (though the old churches of Egypt, and monasteries too, often have at least some older icons, and many monasteries have beautiful frescoes).

I know what you mean about Coptic icons, and am not offended in the slightest. As I tried to say in my post, the key is that you’re really looking at Coptic icons through a Western Latin/Greek lens. I mean, I’m a Westerner too, so they also look that way to me in comparison to the much more well-known Byzantine style. I just remind myself that the importance is not feel shame or insignificance or any particular sensation so much as to connect with the world beyond this one through the depiction…y’know, “windows to heaven” and all that. If the image works for that purpose (and for me, Coptic icons – or at least some of them – do), then it doesn’t matter if it looks cartoonish. It is not cartoonish when I pray the intercessory prayer before it.

By the way, this is not just Coptic icons, either. Also traditional Syriac, Tewahedo (Ethiopian/Eritrean), Armenian, and some Georgian icons look like this. Once you are used to them, they can be just as effective as the more comfortable/familiar Western styles you are used to (many of which in the Latin West in particular also bear more relation to what we’d think of as “OO style” than to the stereotypical Byzantine style, interestingly; check out, for instance, the Catalonian iconography in this video of Mozarabic chant and compare it to the images in my other post). Many people don’t really get past their outer appearance relative to what they think of as iconography, though.

This thread is old, but just in case anyone else is interested, here’s a source where you can order Coptic Orthodox icons

Planning on ordering some to meditate on while praying the Rosary…

I’m looking for Coptic Orthodox icons, but there aren’t too many sources out there online. Does anyone know of any?

Hello there, just wanted to share with you where you can get original Egyptian Coptic icons
I came recently across this page of an female artist.

Hope this will help

system closed September 20, 2017, 2:24pm #15
DISCLAIMER: The views and opinions expressed in these forums do not necessarily reflect those of Catholic Answers. For official apologetics resources please visit www.catholic.com.